Exploring the interplay of virgin and recycled plastic markets

In coming years, recycled PET and polyolefins will likely have to continue competing with cheap virgin plastics. But scrap markets will also be impacted by uncertain government policies and brand owner decisions.

Those were a couple of takeaways from the annual markets panel at the 2019 Plastics Recycling Conference and Trade Show, held in March in National Harbor, Md. During the plenary session, Joel Morales and Tison Keel, both of integrated consulting firm IHS Markit, discussed the market dynamics for virgin plastics and explained how those factors will pressure recovered material prices.

“It was a seller’s market in 2018 for a number of reasons that we can discuss, but we’re back into a buyer’s market again,” Keel told the crowd. “But the question I’m asking myself and we should all ask ourselves is, ‘What role is recycling going to play in that? If it’s getting to be stormy weather, will recycling help to calm the waters, or will it make the waters … potentially more turbulent?'” 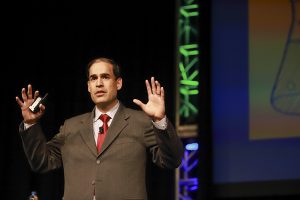 Several of the key factors discussed during this year’s presentation echoed those explored in a panel at the 2018 event.

Separately, late last month, Plastics Recycling Update wrote about a presentation on the panel from Chris Cui, director of China Programs for Closed Loop Partners. She discussed market dynamics and business partnership opportunities between China and the U.S.

Polyethylene: Morales explained how technological developments in fossil fuels extraction in the 2008 timeframe led to boosted production and falling prices for natural gas. As a result, petrochemicals companies invested in plants for manufacturing PE.

“There’s been significant investment in the polyethylene chain based on cheap expectations of ethane, which is a natural gas liquid,” said Morales, senior director of polyolefins for North America. The strategy behind those investments was to export the virgin PE from the U.S.

That price advantage of natural gas over oil has narrowed since, but IHS Markit still predicts the advantage going forward, he said.

In 2017 and 2018, global demand for PE, particularly from China, increased. It was driven by China’s restrictions on recovered PE imports, he said, and the country’s policies to use more clean-burning natural gas for heating (the latter sent demand for HDPE pipes through the roof). Demand growth rates have since declined, Morales said, but are projected to remain pretty solid.

He touched on the U.S.-China trade war, calling China’s tariffs on U.S. prime plastic a “disaster for U.S. polyethylene producers.” IHS Markit estimates that since Aug. 23, when the duties went into effect, producers have lost 3-5 cents per pound on every pound they produce, cutting into profit margins. The firm is assuming in its forecasts that tariffs will be lifted by 2020.

Looking forward at prime production, 2019 will be a year of demand catching up to supply, he said, which means prices have likely hit their bottom. But they’re also not expected to rise significantly. In 2020, another wave of plant capacity comes on-line, pushing supply well above projected demand.

“What does this mean?” Morales asked. “From a resin-seller perspective, it means that your ability to increase price and margins is probably challenged. [For] a prime resin buyer, it’s probably a good time to be buying.”

Recycled plastic markets are kind of stuck in the middle, he said. He spoke with reclaimers whose products have had to compete with very cheap, off-grade wide-spec PE. He expects the selling conditions to remain on par with what they are today, he said.

“There’s been significant investment in the polyethylene chain based on cheap expectations of ethane, which is a natural gas liquid.” – Joel Morales, IHS Markit

Tougher to predict are the effects of government policies, such as global bans on bags, straws and other single-use items. The sustainability movement may reduce resin demand, but it could also stimulate some demand for chemicals with recycling-related opportunities, he said.

For example, California’s bag law banning thin bags prompted processors to increase production of thicker ones. The message IHS Markit has gotten is consumers, instead of washing and reusing the thicker bags dozens of times, are employing them as garbage can liners, however. “So, in that case, recycle has increased polyethylene demand,” he said.

Elsewhere, such as in Argentina, bag bans have curtailed business for virgin PE producers but boosted it for a PP manufacturers, which are selling the plastic for nonwoven PP bags, he said.

Polypropylene: PP has been a tight market for a long time but is beginning to balance, Morales said. In North America last year, producers couldn’t make enough product to satisfy demand, yet the market still grew at 3 percent. That’s because imports filled the gap of about 10 percent of demand, he said.

But the imbalance should ease with increased supply in 2019. For one, there wasn’t a “freakish freeze” in January in the Gulf Coast like in 2018, he noted, and the supply of the feedstock propylene has increased. Also, PP producers have figured out ways to de-bottleneck and increase production capacity. IHS Markit projects about 1 billion pounds of production to come on-line in North America. As a result, they expect to see a narrowing of the pricing gap between cheaper Chinese PP and domestic PP.

“I know that’s a problem for some people in the recycle because, now, wide-spec PP and surplus prime PP is showing up at price points and at places [where] you might have been doing business,” Morales said. “That’s probably going to be an environment you’re going to be facing most of 2019.”

The picture for polyethylene terephthalate

Virgin PET and the chemicals that go into it are oversupplied much like PE, said Keel, senior director for PET, PTA and EO derivatives.

As a result, “it’s not at all clear who is going to be the winners and losers in the recycled PET business,” he told the audience.

Globally, virgin PET demand is 78 percent of production capacity. In the commodity polymers business, if demand is less than 85 percent, the market is probably oversupplied, making it tough to make a profit, Keel said.

“A best case is the cost to produce RPET is going to be flat, could be higher. In any case, it’s higher than the price for virgin PET. Will the consumers of RPET, who are putting out some pretty ambitious goals of recycled content in their containers, will they be willing to pay these higher prices?” – Tison Keel, IHS Markit

Domestic demand is relatively flat. The carbonated drinks market is decreasing but bottled water growth is just enough to offset that, Keel said.

The supply-demand imbalance is expected to get worse with additional production capacity coming on-line. “What we have coming in the next couple of years is a large overbuild,” he said.

Keel said manufacturers are acting irrationally and he suggested they should shut down production capacity to bring supply and demand into better balance; however, none has announced plans to do so. Italian chemicals company Mossi Ghisolfi (M&G) tried to build its way out of the conditions by erecting a huge PET and PTA plant in Corpus Christi, Texas, but low margins and project cost overruns sank the company in late 2017. A joint venture called Corpus Christi Polymers agreed to buy the project and bring it on-line.

Imports have exacerbated the low prices, Keel noted. The U.S. has been steadily importing more and more prime PET. Domestic producers attempted to stifle the foreign competition with anti-dumping complaints filed with the federal government. Anti-dumping duties have shifted the source of the prime PET – it curtailed volumes coming from China, for example – but hasn’t been able to slow the overall weight arriving at U.S. ports, he said. 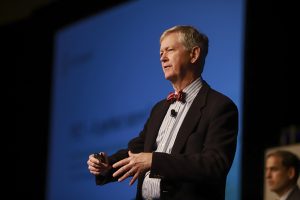 Producers of bottle-grade RPET are expected to have relatively fixed costs to make their product, he said.

“A best case is the cost to produce RPET is going to be flat, could be higher,” Keel said. “In any case, it’s higher than the price for virgin PET. Will the consumers of RPET, who are putting out some pretty ambitious goals of recycled content in their containers, will they be willing to pay these higher prices? I’m not saying they won’t. Historically, in North America, they have not. In Europe, now they are for a number of reasons – structurally very different than the drivers in the U.S. But this is a big question that remains to be answered.”

In terms of bottle-to-bottle recycling, another challenge for beverage brands is the “bottomless” appetite from the fiber industry for RPET, Keel said. That industry consumes more than three-quarters of the RPET produced each year. The driver is simply cost: It’s substantially cheaper to produce staple fiber from recovered PET than virgin materials, he said.

Keel said the new owners would presumably feed the clean flake into their melt-phase resin facilities so they could offer brand owners a recycled-content pellet. That would, in the short term, reduce the amount of bottle-grade RPET on the merchant market, he said.

Petrochemical companies are also investing in depolymerization technologies for scrap PET. Indorama, for example, has partnered with PET chemical recycling startups in both Europe and North America. Those recycling processes, if technically and economically feasible, could be a big market disruptor in the 8- to 10-year horizon, Keel predicted.

But a lingering problem is low PET collection rates in North America, particularly the U.S., Keel said. In 2017, about 29.2 percent of PET bottles sold in the U.S. were collected for recycling, according to an annual report from the National Association for PET Container Resources (NAPCOR) and the Association of Plastic Recyclers (APR). To compare, the rate was estimated at 58 percent in 2017.

“How are we going to meet the demand being laid out there by brand owners when the collection rates are so low, and how do we get those up?” he asked. “I don’t have an answer for that.”

When asked about deposit laws, Keel said he thinks they work well to prevent litter, boost collection and generate higher-quality bales. In the past, beverage brand owners have lobbied against them, however, because the extra cents paid by the consumer at the register decrease overall sales.

“I’m just not sure at the moment where the major brand owners are from a policy perspective on deposit laws. Historically, they’ve opposed deposit laws,” he said. “Whether or not they’ll continue to oppose that, I can’t say.”