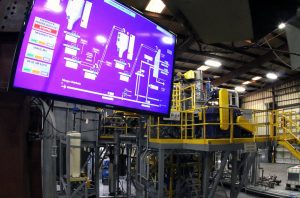 The facility of Tigard, Ore.-based Agilyx, which processes polystyrene and recently entered a partnership with virgin plastics maker Ineos Styrolution.

The agreements come at a time of greater public awareness of the ocean plastics problem and more consumer and government pressure to ensure proper end-of-life management of plastic products. At the same time, a number of startups are commercializing new chemical recycling technologies that can overcome quality and contamination challenges, which limit end markets.

In chemical recycling processes, recovered polymers can be converted into their component monomers, which are then used as the basis for new polymer manufacture.

The following is a roundup of a few of the recent announcements.

Ioniqa, which is a spinoff from the Eindhoven University of Technology in the Netherlands, uses a patented magnetic catalyst in the process of depolymerizing PET. The approach allows for the recycling of any PET, including colored packaging and carpets, into clear food and drink packaging.

Ioniqa’s technology has passed the pilot stage and is now moving toward testing at industrial scale. The company recently announced that its demonstration facility, at the Port of Rotterdam, has completed its 50th test run. The facility is recycling PET bottles, trays and textiles.

The next step is building an industrial-scale plant capable of processing 10,000 metric tons per year. It’s on schedule to be ready in summer 2019, according to Ioniqa.

Through the partnership, the recovered monomers would be repolymerized by Indorama Ventures to create new PET. Among its worldwide holdings, Indorama has a plant in Rotterdam capable of producing up to 410,000 metric tons per year of PET.

“Our approach is not limited to our own operations, but we take the entire supply chain into account, including what happens to our products after use,” Aloke Lohia, group CEO of Indorama Ventures, stated in a joint press release. “We therefore look forward to working closely with Unilever and Ioniqa to leverage this state-of-the-art technology that contributes to tackling the global issue of waste and enables us to go beyond the role of a polymer manufacturer.”

Unilever is also working to support chemical recycling methods for recycling multi-layer flexible packaging. The company is testing a process of dissolving, separating and precipitating the PE content in packages at a facility in Indonesia.

Meanwhile, virgin PS producer Ineos Styrolution has signed a deal with Tigard, Ore.-based Agilyx, which is using a chemical recycling process to recover styrene monomer from rigid and foam PS. The agreement, announced in late April, aims to site an Agilyx recycling unit at or near an Ineos production facility in North America. The styrene produced by the Agilyx unit would be fed into Ineos’s nearby production process.

Agilyx recently held an opening event for its first facility in Tigard, which is near Portland, Ore. That unit is capable of processing 10 tons per day.

The latest agreement is the second deal between Ineos and Agilyx. Last November, Ineos Styrolution entered a development agreement with Agilyx to help refine the technology so the end product best meets the needs of the manufacturer.

“We are eager to lay down the foundation for polystyrene to be recovered and recycled and build the ecosystem around chemical recycling,” Alexander Glück, president Americas of Ineos Styrolution, stated in a press release.

Finally, petrochemicals and energy giant Total has signed a deal with Montreal-based Polystyvert, which uses a technology that dissolves EPS in essential oils before purifying and reforming the plastic. The method does not break the chemical bonds of the plastic, however.

“The combination of Polystyvert’s innovative technology and Total’s know-how in industrial-scale dissolution and polymerization technologies should generate high-quality recyclates addressing a broad range of polystyrene market requirements,” according to a press release.

“Collaborating with Total on household waste will accelerate the industrial development of our technology for global markets and demonstrate its suitability to address any type of polystyrene stream,” Solenne Brouard, founder and CEO of Polystyvert, stated in the release.