Resource Recycling highlights the latest announcements from industry companies and organizations. An archive of these announcements can be found below. For information on submitting press releases or contributing op-eds to us, review our FAQ page.

The Institute of Scrap Recycling Industries (ISRI) released an estimate that the recycling industry contributes $116 billion in economic output to the U.S. economy. ISRI also named Cascade Engineering as its 2021 Design for Recycling Award winner, recognizing the company for its EcoCart, made with up to 50% recycled plastic.

Scotch producer Johnnie Walker announced it will use a minimum of 60% recycled glass in its core range of bottles by 2025 and 100% recycled content in its plastic packaging, among other sustainability initiatives.

The Northeast Recycling Council (NERC) is seeking input for a planned national virtual training on diversity, inclusion and racial equity in the recycling and solid waste industries. The group also recently announced a scholarship fund with a similar focus.

Republic Services released data showing recycling trends during the pandemic, including significant increases in OCC, UBC, plastic and glass bottle recycling over the past year.

Consulting firm RRS released a report examining recycling, organics recovery and other sustainability activities on university and college campuses in the U.S.

The Can Manufacturers Institute (CMI) and The Recycling Partnership awarded first of CMI’s aluminum beverage can capture grants to Independent Texas Recyclers in Houston and Curbside Management in Asheville, N.C.

The Delaware Department of Natural Resources and Environmental Control rolled out Recyclopedia, an online tool to inform residents of recycling options for numerous items.

The Glass Packaging Institute (GPI) announced that Tim Connors, managing director of O-I Americas North, will serve as chairman of GPI’s board of trustees.

Machinex will sell its SamurAI sorting robots in Italy through a partnership with local equipment sales firm BioMRF Technologies.

Aluminum recycling firm Novelis announced new sustainability targets and stated that the company will “continue increasing the use of recycled content in its products.”

Recology announced that its food scrap composting program in San Francisco is in its 25th year, and the hauler provided a brief history of the effort.

The National Waste & Recycling Association (NWRA) Connecticut chapter testified in opposition to legislation that would increase the number of products covered by the state’s bottle bill program, among other changes.

Federal lawmakers introduced the Recycling Enhancements to Collection and Yield through Consumer Learning and Education (RECYCLE) Act of 2021, which was previously introduced in 2019. The bill received quick support from the American Chemistry Council, Institute of Scrap Recycling Industries, National Waste & Recycling Association and others.

The City of Santa Cruz Recycling Center launched a virtual tour of its facility after COVID-19 halted in-person visits.

The Product Stewardship Institute announced that a bill establishing extended producer responsibility for all battery types has passed into law in Washington, D.C.

The Recycling Partnership and Facebook rolled out “Communities for Recycling,” a national effort to provide local recycling information through Facebook’s Messenger platform.

Shareholder advocacy group As You Sow reported that Mondelez International and PepsiCo agreed to reduce their use of virgin plastic, after As You Sow filed shareholder proposals with each company. Mondelez issued its own press release on its commitment.

The Container Recycling Institute (CRI) presented its 2021 Pat Franklin Courageous Spirit Award to Jack Coughlin, Jr., a longtime Massachusetts litter activist who was struck by a car and paralyzed while cleaning up litter in January 2021.

AMP Robotics announced that its pilot secondary sortation facility, which uses robots to sort valuable commodities from MRF residue bales, has shown promising results. The Denver-based company is looking to roll out secondary sorting facilities elsewhere in the country.

Hershey announced 2030 environmental goals, including making all of its packaging recyclable, reusable or compostable.

The Monterey Regional Waste Management District in Monterey, Calif. wrote about the benefits of retrofitting its MRF in 2020 with new Bulk Handling Systems (BHS) equipment. BHS also recapped the project.

The Northeast Recycling Council is convening a work group to develop model legislation for recycled-content requirements for glass bottles and fiberglass insulation.

The RecycleCT Foundation published the Connecticut Recycling Economic Information Study, which documents the economic contributions of residential recycling in the state.

The Association of Plastic Recyclers (APR) announced that its Demand Champions program generated more than 175 million pounds of new demand for post-consumer recycled resin during the past year.

The Baker Institute for Public Policy, a think tank run by Rice University, published a set of recycling-related policy recommendations for the Biden administration.

PreZero announced that it completed an acquisition of SUEZ in Sweden, and that the acquired company has changed its name to PreZero Recycling AB.

The Recycling Partnership published “Start at the Cart,” a report examining methods of influencing public behavior on recycling.

Eriez completed an expansion of its equipment production plant in Erie, Pa.

Deodorant producers Old Spice and Secret released deodorant products that use paperboard packaging made from 90% recycled fiber, rather than traditional plastic packaging.

Re-Trac Connect announced the municipalities that participated in its Municipal Measurement Program for two years in a row.

BlackBridge Investments is celebrating 10 years in business and recently moved into a new headquarters in Wall, N.J.

Bulk Handling Systems (BHS) was selected to supply equipment for a major retrofit of the Mt. Diablo Recycling Center in Pittsburg, Calif.

Organics-focused nonprofit ReFED released figures showing food waste generation has leveled off in the U.S. since 2016, after increasing significantly earlier in the decade.

The Carolina Recycling Association launched a podcast, and the first episode featured an interview with Nina Butler of More Recycling.

Maine MRF operator ecomaine sustained damage from a fire at a single-stream recycling facility, sparked by an improperly disposed lithium-ion battery from a power tool.

Machinex will supply equipment for a new U.K. MRF that will feature 14 SamurAI sorting robots and 14 optical sorters.

McDonald’s restaurants in Brazil will begin using food trays made from a composite material made by UBQ Materials from post-consumer household scrap.

Recycling Connections, a nonprofit recycling organization in Stevens Point, Wis., is celebrating its 40th anniversary with a number of events throughout the year.

The Institute of Scrap Recycling Industries (ISRI) is accepting nominations for its 2021 Design for Recycling Award.

Sortera Alloys, a company that’s developing an artificial intelligence-driven sorting system for various metals, appointed Bill Caesar to its board of directors. Caesar was formerly CEO of WCA Waste Corporation and has held leadership positions at Waste Management.

The Carton Council announced that Jordan Fengel has joined the organization as director of government affairs. Fengel previously led the State of Texas Alliance for Recycling (STAR) and recently joined Tetra Pak as sustainability manager for the U.S. and Canada.

Casella Waste Systems published its 2020 Sustainability Report, which includes new 2030 sustainability goals. Among them is a goal to nearly double the company’s annual recycling tonnage to 2 million tons.

The Continuous Improvement Fund published a farewell letter from Mike Birett, the organization’s longtime managing director who is moving into semi-retirement at the end of the year.

The Unify Nations in Trash Elimination (UNITE) for our Oceans Act was introduced in the U.S. Senate. The bill establishes a $300 million fund for projects that reduce marine debris and plastic pollution.

The American Beverage Association, in partnership with The Recycling Partnership and Solid Waste Authority of Central Ohio (SWACO), announced a $250,000 investment to lift plastic bottle recycling in central Ohio.

The Consumer Goods Forum announced updates from its Plastic Waste Coalition of Action, an industry group focused on packaging design and policy development. The coalition also welcomed Amcor as a new member.

Reloop announced an update to its Global Deposit Book, which includes statistics on container deposit systems around the world.

Republic Services published a report covering its plastic collection and recycling operations. The report was spurred by pressure from investors.

Call2Recycle announced Leo Raudys will be the organization’s next CEO and president, effective Jan. 1.

The Flexible Packaging Association and the Product Stewardship Institute announced their agreement on several legislative elements of an extended producer responsibility bill for packaging and paper products.

Machinex will install SamurAI sorting robots at a Veolia site in France, the first European installation of the robots.

Re-TRAC Connect will collaborate with nonprofit organization One Tree Planted to plant up to 500 trees, one for every municipality that joins the Municipal Measurement Program and completes its three core surveys.

The U.S. Tire Manufacturers Association (USTMA) announced a project to assess and compile existing research on the performance, environmental impacts and benefits of using ground tire rubber in asphalt.

Aquafil Group, a carpet producer and reclaimer, will acquire Planet Recycling, which collects carpet in Arizona and California.

Circulate Capital will invest in Nepra, a waste management firm based in Ahmedabad, India.

Rachel Wagoner was appointed director of the California Department of Resources Recycling and Recovery (CalRecycle). Former director Scott Smithline left the position at the end of 2019.

Clean Earth, which recycles a variety of specialty material streams, anticipates it will process 13 million aerosol cans this year, up 85% from 2015.

Machinex held a virtual open house to mark its 50th anniversary in business.

The Recycling Partnership launched a “Feet on the Street” recycling improvement campaign in partnership with the Lafayette Consolidated Government (LCG) in Lafayette, La.

The Washington State Recycling Association (WSRA) announced its 2020 Recycler of the Year Award recipients and its Recycling Hall of Fame inductees.

Glass container producer Ardagh received a sustainability award from Packaging Europe for the company’s development of briquettes made from fine particle glass rejected during the recycling process.

Ring Container engaged a consulting firm to study how the company’s SmartCAN PET canister flows through an advanced MRF in Phoenix.

The Chinese government published updated standards for imports of recovered brass, copper and aluminum. Recycling stakeholders said the move is an indication of an acknowledgement from China that there’s a difference between “scrap” and “waste.”

The Every Bottle Back initiative, a project managed by beverage industry stakeholders, marked one year since its launch.

The Solid Waste Association of North America (SWANA) and Glad announced an expansion of the Sanitation Workers Support Fund, which provides financial assistance to solid waste and recycling workers impacted by COVID-19.

The U.S. Department of Justice filed a civil suit and settlement requiring Waste Management to divest assets in order to proceed with its acquisition of Advanced Disposal Services. The move was anticipated, and the companies had previously arranged to sell assets to GFL Environmental. The acquisition is now complete, according to Waste Management.

The Mattress Recycling Council announced that the mattress recycling rate in Connecticut increased for the fifth year in a row.

The U.S. Tire Manufacturers Association (USTMA) published its findings that tire recycling has stalled due to a lack of end-market development.

The Mattress Recycling Council published a report based on its research into a new approach for recycling pocketed coils in mattresses.

Textiles producer SAYA launched with a product line that includes material made from fabric scrap.

The Recycling Partnership awarded $2.7 million in grants to 10 cities to reduce contamination and increase capture rates.

Wastequip WRX, which offers parts, service and installation for most types of waste-handling equipment, opened a service center in the Dallas-Fort Worth area.

Cascades launched a recyclable thermoformed cardboard tray made from 100% recycled fiber, most of which is post-consumer material.

Machinex supplied equipment for a major upgrade to a single-stream Republic Services MRF in Greensboro, N.C.

The National Waste & Recycling Association (NWRA) announced that the waste and recycling industry was included on a list of recommended critical industries to receive the COVID-19 vaccine during the second priority phase of vaccine allocation.

The Recycling Partnership wrote about the need to promote diversity and racial justice within the recycling sector, as well as some new initiatives the organization is launching with those goals.

The WestRock paper mill in Newberg, Ore. has been sold and will be demolished for its scrap value. The mill had drawn interest as a site for a recycled paper mill project. 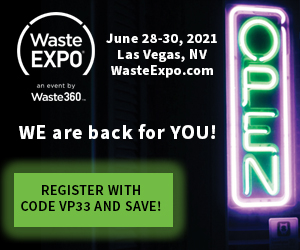