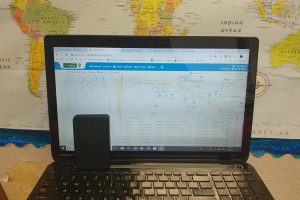 Of 170 trackers placed in e-scrap devices over the past two years, the vast majority remained in the U.S. Most of those electronics that were exported went to Asia, according to the Green Tracking Service.

Dennis Ward Enterprises (DWE), a California company that runs the Green Tracking Service, recently released its first report. The document provided a high-level look at the journeys traveled by scrap materials seeded with trackers in 2017 and 2018.

DWE and its tracking program are part of a wider industry push to install GPS in end-of-life devices to better chart the movement of material through the electronics recycling and reuse chain.

The analysis indicates 5 percent of tracked products were exported. Of those devices that were exported, almost all entered countries that aren’t members of the Organisation for Economic Co-operation and Development (OECD) and only 11 percent entered an OECD country (Spain).

“This study has produced an initial baseline for e‐waste flows from the USA throughout  the world,” according to the report. “Though the sample was quite small, it gives us insight into e‐waste flow trends to date.”

Dennis Ward of DWE said the earliest trackers were deployed in late 2017 and early 2018. He couldn’t provide more details, such as specific numbers of devices, because of contractual agreements.

Companies that have publicly announced they’ve signed up for Green Tracking Service include Dynamic Lifecycle Innovations and Schupan Electronics Recycling.

The Basel Action Network (BAN), which has also used trackers as part of its exports activism, is also now providing a tracking service, called EarthEye, to customers. Companies that have signed up with EarthEye include Cascade Asset Management, Dell, ERI and Samsung.

BAN’s latest U.S. tracking study, conducted as part of its advocacy mission, showed 10 percent of devices dropped off for recycling in the U.S. were exported. Overseas destinations were Hong Kong, Pakistan and the Philippines.