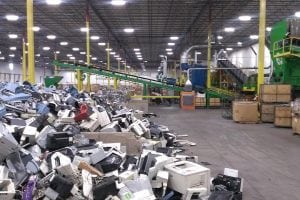 A nationwide processor will use tracking devices to monitor the downstream movement of its scrap electronics.

ERI has become the first recycling company to sign up with the recently unveiled EarthEye service provided by the Basel Action Network (BAN). EarthEye uses GPS trackers placed inside electronics to monitor where they’re shipped. Dell is also using the service.

The e-Stewards organization uses trackers to verify processor compliance with its standard, but deployment are limited in scope. And, for years, BAN has used trackers as part of its activism work. BAN has made EarthEye available to e-Stewards-certified processors wanting to voluntarily track downstream movements so they can market use of the tool to customers.

“BAN’s tracking systems to date have repeatedly proven to be well ahead of the curve and genuine game changers in the ITAD industry,” Aaron Blum, ERI’s co-founder, chief operating officer and chief compliance officer, stated in a press release. “With EarthEye we will be able to show our customers, the industry and the world that we are always leaders in terms of innovation, responsibility and transparency – and that we are once again on the cutting edge of downstream due diligence, environmental stewardship and data security.”

Jim Puckett, executive director of BAN, said he wasn’t able to release details on ERI’s use of the trackers, including how many it plans to deploy, without ERI’s permission. ERI leaders involved in the project couldn’t be reached by E-Scrap News for comment on Wednesday. The company’s vice president of communications and media relations, Paul Williams, said ERI staff will undergo a training process with BAN. After that, the company will have more to announce regarding its launch of the system, he said.