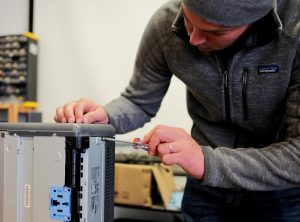 The Basel Action Network has launched a commercial tracking service to monitor e-scrap flows, and its first customer is an OEM that was lambasted by the watchdog group over exports two years ago.

Dell and Seattle-based BAN have teamed up to plant 40 tracking devices inside scrap electronics collected through Dell’s U.S. consumer take-back programs. The collaboration was announced June 19 in conjunction with the release of Dell’s 2018 Corporate Social Responsibility Report.

Since then, BAN has also released more details on its tracking service, which it describes as “real-time logistics monitoring” for organizations concerned about data-security breaches, unauthorized exports, and brand damage from lack of accountability and downstream due diligence.

In 2016, as part of its e-Trash Transparency Project, BAN published a report entitled “Disconnect: Goodwill and Dell, Exporting the Public’s e-Waste to Developing Countries.” BAN said it had used GPS trackers to follow devices dropped off at Goodwill stores, many of which partner with Dell as part of its Reconnect Program. A number of those low-value electronics were exported to East Asia.

“Given some lemons, Dell chose to make some lemonade,” Jim Puckett, executive director of BAN, stated in a June 19 press release. “We applaud Dell for their desire to step up and work with us to proactively get ahead of potential downstream accountability issues and to take action.”

As part of the pilot project, Dell will deploy 30 devices seeded with trackers into its consumer collections stream. BAN will independently deploy another 10 into the stream. The goal is to ensure Dell’s partners and vendors comply with the company’s export policies, according to the BAN press release.

According to a Dell press release, results will be reported about a year after the pilot period.

“The project with BAN provides us with greater visibility into our downstream processes and could potentially add an extra layer of transparency to our existing electronics disposition partner audit program,” wrote David Lear, Dell’s vice president of corporate sustainability, in a blog post. “We are open to the fact that we may find some gaps, and we’re fully committed to putting an action plan in place if we do.”

“We have learned that audits, inspections and diligent compliance officers alone will not always prevent bad actors from jeopardizing a company’s reputation and resources,” Hayley Palmer, director of EarthEye, stated in a June 21 BAN press release. “EarthEye is a cost-effective tool that can do what nobody else can do – detect fraud or contractual violations after the auditors have gone home. In so doing, EarthEye can help companies get ahead of serious problems rather than finding themselves scrambling to react.”

According to the EarthEye website, profits from the service go to BAN, a nonprofit group, to support its environmental protection mission.

According to BAN, prices for the service are discounted for e-Stewards organizations and those choosing to install their own trackers. Discounts will also be available for bulk purchasing and multi-year contracts. In one example, an e-Stewards entity choosing to self-install trackers would pay $4,531 a year to deploy 10 devices. In another scenario, a non-e-Stewards company or group would pay $46,809 a year to have 100 trackers deployed on its behalf.

The EarthEye service will be open to all enterprise companies, nonprofit groups and government agencies, according to its website. For e-scrap processors, however, it will only be available to e-Stewards-certified facilities, said Jim Puckett, BAN executive director.

Where processors fit in

The e-Stewards standard currently deploys trackers to verify processor compliance with the electronics recycling standard, but the trackers are sent out in small numbers, Puckett said.

“We know that certain of our e-Stewards recyclers would like to do far more and brag about this to their customers,” he said. “Some might even show their customers the portal so they can show them where it’s all going in real time. However none of this would mean a thing to a savvy client without BAN also checking via our e-Stewards (performance verification) program. In that combination, greenwashing would be very risky for a recycler. But with the integration of the two programs, there is enhanced integrity. This is essential for recycling programs.”

The EarthEye website states each contract includes a strict non-disclosure agreement to ensure proprietary data is secure and private. “Your tracking data will only be used to publish an annual, high-level, anonymous report showing aggregate statistics on exporting and importing countries and the types of electronic equipment involved,” according to the website. “This data benefits the entire industry.”

That being said, if a processor using EarthEye discovers a downstream vendor is managing e-scrap contrary to the e-Stewards standard, that processor would still be subject to e-Stewards’ “enforcement” procedures, Puckett said. In that scenario, the violation likely wouldn’t be willful, so it wouldn’t be considered a “critical” non-conformity, he said; instead, it would be considered a major or minor non-conformity, giving the processor the opportunity to work with its certifying body to correct the issue so it didn’t lose certification, he said.

The use of GPS trackers to monitor e-scrap movement has gained momentum of late. Recently, a California company announced the availability of its own Green Tracking Service. That company, Dennis Ward Enterprises, is working with Wisconsin-based processor Dynamic Recycling to monitor shipments by Dynamic’s downstream vendors. The tracking company is also talking with Sustainable Electronics Recycling International (SERI), which administers the R2 standard.