Leon Farahnik is back, with bullish view on markets 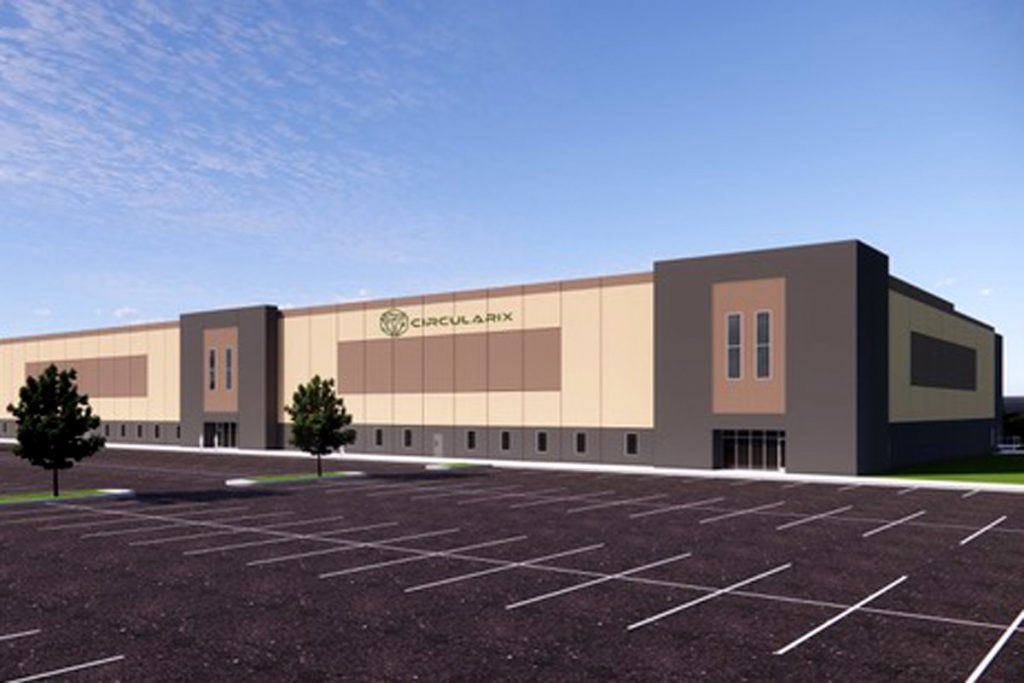 A digital rendering of the planned Circularix facility | Courtesy of Circularix

The former head of bankrupt reclaimer CarbonLite is launching another company, betting that virgin and RPET pricing will continue to de-couple as brands search for recycled plastic.

Farahnik was formerly CEO of CarbonLite, which was the largest PET reclaimer in the country before it filed for bankruptcy and closed in early 2021.

In an interview with Plastics Recycling Update, Farahnik described what he sees as a marketplace that has been rapidly evolving. He also explained how Circularix will fill a slightly different role in the supply chain than CarbonLite did.

“There has been a total disconnect between virgin and post-consumer [prices],” he said. “So no longer is the pressure there to compete with virgin material.”

Macquarie Group is an Australia-headquartered financial services firm, and it is providing both equity and debt financing for Circularix through its Commodities and Global Markets Group, Farahnik said. Macquarie is also providing foreign exchange hedging and other risk-management services.

Circularix is looking to open its first plant, in Hatfield, Pa., by December 2022. After that, it aims to open four other facilities, according to Farahnik, with sites planned in Arizona, Florida, Texas and the Pacific Northwest.

Farahnik declined to divulge the estimated cost of each of the company’s plants.

Circularix is targeting a total production capacity across the five facilities of 275 million pounds of RPET pellets per year, according to a press release.

The joint venture comes a little over a year after CarbonLite filed for Chapter 11 bankruptcy, hoping to reorganize and continue operating. When that failed, a court approved the auction sales of its three PET recycling plants.

Another CarbonLite company, recycled-content PET thermoform producer Pinnpack, was purchased by a former Pinnpack leader and CarbonLite board member.

Following the auctions, an official committee of unsecured creditors sought to investigate Farahnik and other former executives by asking the court to compel them to turn over documents and submit to oral interviews. The committee alleged financial mismanagement and conflicted decision-making, allegations that Farahnik disputed. In September 2021, the judge put the committee’s motion for an investigation on hold.

In the recent interview, Farahnik said he wouldn’t comment on any legal matters.

Plastics Recycling Update received no response to multiple emails sent to attorneys that represented the committee seeking information about the status of any investigation.

“I liked their approach, and their knowledge of the recycling business,” Farahnik said. “They have done a very good job with investments in [materials recovery facilities] and in recycling, so I felt that they are the ones that would understand the business much more than other banking groups.”

CarbonLite brought in bales of post-consumer PET, which it shredded, washed and pelletized. But Circularix plans to purchase only washed PET flakes, which it will decontaminate, extrude and pelletize using lines provided by Starlinger Group, Farahnik said.

But like CarbonLite, Circularix’s customers will include major beverage brands.

Farahnik pointed to a couple of main reasons for the closure of CarbonLite: brands’ unwillingness to pay prices reclaimers need to charge for RPET and problems COVID-19 caused with the opening of the Reading, Pa. plant, which was slated to come on-line right as coronavirus hit North America.

Since then, California, Washington state and New Jersey have imposed or signed bills imposing minimum-PCR-content mandates, brand executives are making commitments to use PCR, and more shareholders are demanding steps be taken by companies to reduce greenhouse gas emissions, Farahnik said. As a result of the RPET demand, he sees a de-coupling of virgin and RPET prices, where falling virgin plastic prices don’t necessarily have the same downward pull on recycled resin prices they once did.

He noted the importance of buyers paying enough for RPET to ensure reclaimers remain in business.

“It’s essential to make sure that recyclers like me – not just me, all recyclers – are making money so that they can expand facilities and help the industry to achieve their goals,” he said. “Without profits … it’s a no-win situation for both sides.”

The U.S. has ample supply of washed PET flakes available for Circularix to purchase, Farahnik said, noting that U.S. reclaimers today have an aggregate capacity of 1.4 billion pounds. Much of that goes into textiles, but beverage brands are pushing to ensure the plastic goes back into bottles, and materials recovery facilities are getting the message, he said.

He said Circularix has enough sourcing agreements in place to supply its five planned plants.

He added he doesn’t see there being competition with existing PET reclaimers. That also goes for DAK Americas, which runs the former CarbonLite plant only a few dozen miles or so from where the first Circularix plant will open in Pennsylvania.

“It’s really not a competition,” he said. “It’s more to have more availability so the brands can hit their targets for post-consumer usage of material.”

He said deposit programs and the use of reverse vending machines (RVMs) outside of stores in non-deposit states are the keys to boosting supply. Retailers should provide a financial incentive in the form of coupons or other strategies to incentivize people to return containers to RVMs.

Those strategies could push the PET bottle recycling rate to 50% or more, which could allow RPET prices to fall and become more competitive with virgin plastic, he said.

“That’s really the formula for success,” he said.

That being said, he believes there’s already enough RPET supply available for brands to meet their mandatory targets in California. Under state law, beverage brands are supposed to have 15% PRC by 2022. Data made public by the California Department of Resources Recycling and Recovery (CalRecycle) showed that, in 2021, some beverage brands were on track to meet their requirements, while others were far from them. Niagara Bottling, a private label bottled water producer that used to buy RPET from CarbonLite, experienced a huge year-over-year drop in PCR usage. Farahnik said the RPET was available, but nobody was able to sell it to Niagara at a price Niagara was willing to pay.

“There’s enough post-consumer material for [brands] to reach their 15% that California set,” he said. “It’s only a matter of they don’t want to pay the price.”