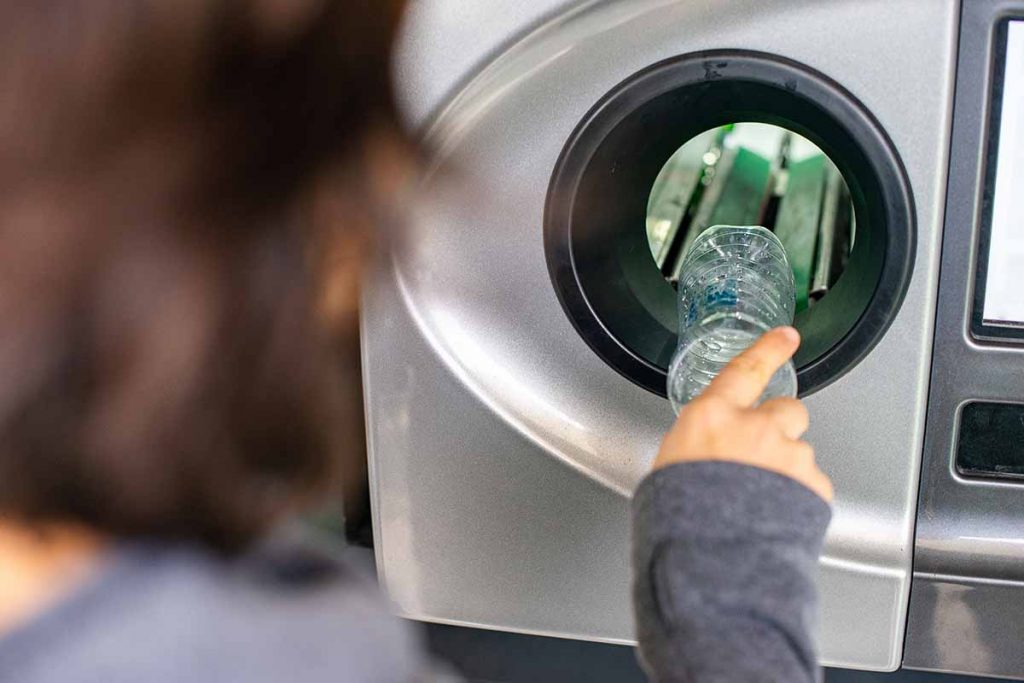 The California Department of Resources Recycling and Recovery (CalRecycle) on April 14 released 2021 data on virgin and recycled plastic usage in beverage containers covered by the state’s deposit law. | Pazargic Liviu/Shutterstock

Numbers for 2021 show some big beverage brands were ahead of the game when it comes to complying with California’s recycled-content law, including BlueTriton Brands, Coca-Cola Co. and PepsiCo. Others remained far short of the targets set by the state.

The California Department of Resources Recycling and Recovery (CalRecycle) on April 14 released 2021 data on virgin and recycled plastic usage in beverage containers covered by the state’s deposit law. Under state law, beverage brands have to report the information annually, and the state is required to disclose it to the public.

Starting this year, California law requires all plastic bottles covered by the container redemption program average at least 15% post-consumer resin (PCR). That mandate increases to 25% in 2025 and 50% in 2030.

That means that when 2022 usage numbers are calculated and reported next year, brands will have to be at the mandated thresholds. Importantly, penalties for non-compliance don’t come into effect until 2023.

In terms of PET, some big beverage companies are already complying with the law by averaging high RPET content in their bottles sold in California. Those include BlueTriton Brands at 30%, CG Roxane (owner of Crystal Geyser brand water) at 50%, The Coca-Cola Company with 20%, and Pepsi Cola Bottling Group with 23% PCR.

The data shows other big brands were lagging far behind, including Niagara Bottling, a private label water producer that had only 4% RPET. The same goes for American Bottling Company, a bottler owned by Dr Pepper Snapple Group that used only 2.8% RPET in 2021.

Additionally, many familiar names continued to use zero RPET in 2021, including Fiji Water, Arizona Beverages, Ocean Spray Cranberries and more (Fiji Water rolled out a 100% RPET bottle this year that will replace virgin RPET 500-milliliter and 330-milliliter bottles throughout the U.S.).

“As the first U.S. beverage company to open an in-house recycled PET facility we feel we have strong momentum and will continue to stay the course,” he stated. “CG Roxane is committed to addressing the plastic problem and we saw the value of rPET as one of several impactful steps toward a solution. Investing in an rPET facility over which CG Roxane has direct oversight ensures that we can achieve our sustainability goals and uphold our commitment to closing the loop on single use plastic bottles.”

The Coca-Cola Company told Plastics Recycling Update in a statement it rolled out 100% RPET bottles in California in 2021. The company is pushing to use more RPET.

“We continue to actively invest in and increase recycled PET in California and beyond to meet our World Without Waste goal of using at least 50% recycled material in our packaging globally by 2030,” according to the statement.

The following are PET details for beverage manufacturers using at least 1 million pounds of PET in California:

Mandates are on the way

Under Assembly Bill 793, which was signed in 2020, CalRecycle can assess penalties on manufacturers that fall short of targets starting next year. The department is able to levy fines of up to 20 cents for each RPET pound a brand falls short. Those could total in the tens of thousands, hundreds of thousands or even millions of dollars depending on company size and RPET usage.

That being said, provisions of the law exempt smaller beverage companies from the requirements. According to an analysis by the California-based Container Recycling Institute (CRI), which supports bottle bills, the legal language could have the effect of exempting a large number of brands from the recycled-content requirements.

Additionally, CalRecycle has authority to reduce penalties based on a number of factors, including availability of recycled resin. Meanwhile, brands and consultants say supply is too little for them to meet their goals, especially when it comes to post-consumer material, as opposed to post-industrial plastic. In fact, Independent Commodity Intelligence Services (ICIS) recently analyzed the investments that would need to occur to produce enough RPET and recycled polyethylene for brands to meet California’s bottle requirements. ICIS estimates an additional 800,000 metric tons (about 1.76 billion pounds) of food-grade recycled PET and PE would be needed to meet the 15% mandate this year.

The imbalance is leading to higher RPET prices. As of this month, bales of curbside PET are selling for an average of over 39 cents per pound nationally, according to RecyclingMarkets.net. A year ago, the price averaged under 12 cents a pound, and in 2020, it averaged just over 9 cents.

A Coca-Cola North America spokesperson noted the company in 2021 introduced bottles made from 100% recycled plastic (excluding cap and label) across the portfolio. In California, those included a 13.2-ounce bottle across multiple brands owned by Coca-Cola Co. and a 20-ounce bottle for Coca-Cola, Diet Coke and DASANI water.

“We are working with our suppliers and partners to increase the availability of recycled PET and reduce the premium for the material as well as to increase the opportunity to use it in food-grade packaging,” according to the statement.

The company has been able to meet its commitment of 50% recycled content in West Coast bottles by operating its own facility that takes in PET flakes and produces food-grade RPET pellets. CG Roxane opened the RPET pelletizing facility in San Bernardino, Calif., in November 2019, and is working to open a second plant in Benton, Tenn. slated to come on-line in 2023. Each has a total capacity of 35 million pounds per year.

Genthe noted that recycled resin availability in the marketplace can be challenging, with hard limits of available feedstock and large variability of cleanliness of PET flake from supplier to supplier, especially in less-developed recycling markets outside of California.

“Making our own rPET pellets, combined with virgin PET at our bottling plants, gives us complete control over our bottle production,” he said.

This story has been updated to correct the opening date of CG Roxane’s first RPET processing facility in San Bernardino, Calif.