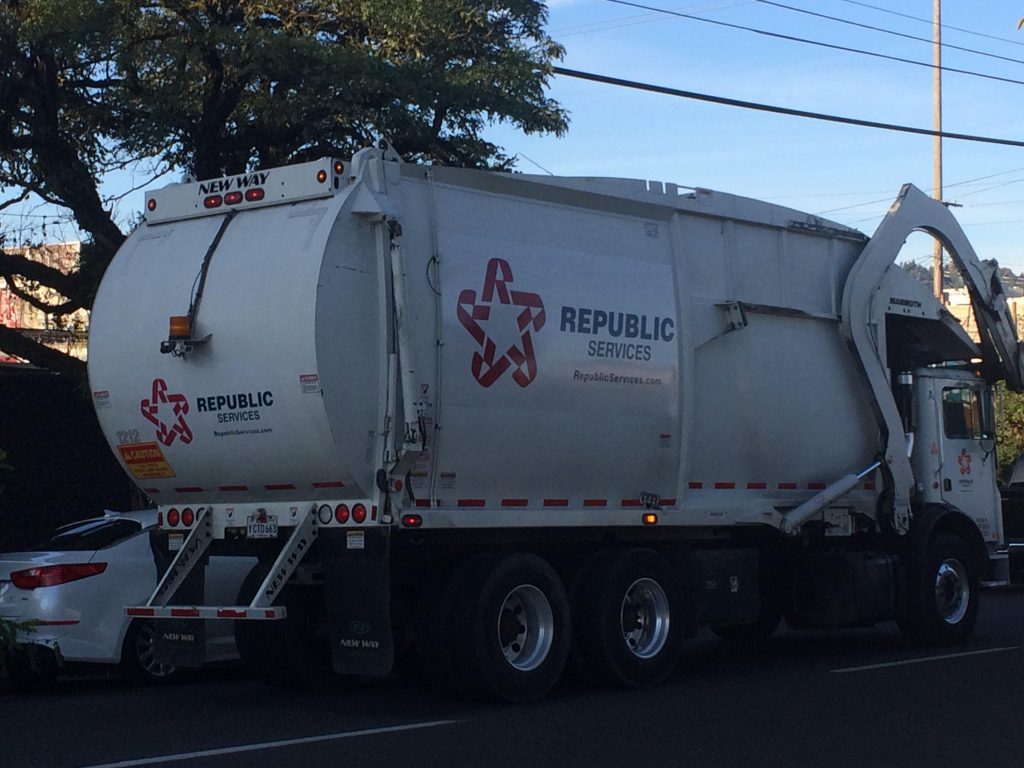 Some of the largest publicly traded garbage and recycling companies got pinched by recycling markets during the third quarter. Others got flat-out hammered.

Republic Services’ recycling business brought in $68.6 million in revenue during the third quarter, down 10% year over year.

The average price for recovered commodities, excluding glass and organics, was $72 during the quarter, down 32% year over year, according to the company’s quarterly report.

During the first quarter, Republic’s recycling revenue was down year over year, but it was actually up substantially in the second quarter.

During an Oct. 30 conference call with investors, John Vander Ark, president of Republic Services, said the average price for recyclables continued to decline in October, to $68 per ton.

Republic, like other haulers, is working to renegotiate municipal contracts to ensure the company gets paid to take recyclables, and to reduce its exposure to commodity price changes. During the call, Vander Ark said the company has secured price increases from about 35% of its municipal recycling collection customers.

It’s also working to develop more efficient MRFs. Earlier this year, Republic opened an advanced sorting facility in Plano, Texas. Vander Ark said that, to date, the facility has seen a 20% decrease in total cost per ton, and that number includes the depreciation expenses for the capital investment.

Recycling now makes up less than 3% of Republic’s revenue. Overall, the company brought in $2.6 billion during the third quarter, up over 3% year over year.

Ontario-headquartered Waste Connections’ recycling business brought in $13.7 million in revenue during the third quarter, down nearly 39% year over year. Excluding the impact of acquisitions, recycling revenue was $13 million, down 43% year over year.

The numbers reflect deepening recycling market pains as 2019 has progressed. During the second quarter, Waste Connections’ recycling revenue was down 26% year over year, and during the first quarter it was down 25% (excluding the impact of acquisitions).

According to the quarterly report, the recycling revenue decreases were mostly because of lower prices for OCC and paper, a result of decreased overseas demand.

During an Oct. 29 conference call with investors, company CEO Worthing Jackman said OCC prices in the third quarter averaged $43 a ton, down 51% year over year. The combination of lower fiber values and higher third-party processing costs meant decreased profitability. Jackman said EBITDA (earnings before interest, tax, depreciation and amortization) was down by $14 million. That equaled a drop in the recycling profit margin of about 0.8 percentage points.

“OCC and mixed paper prices appear to have stabilized for the time being, which we had expected given increased demand from certain domestic mills converted to allow for the use of recovered fiber and feedstock,” Jackman said, according to a transcript from Seeking Alpha. “Given capacity additions year-to-date and looking ahead into 2020, there are a number of additional mills and conversions scheduled to come online, which could increase demand for recycled fiber feedstock by over 1 million tons.”

Recycling now makes up less than 1% of the company’s revenue. Overall, during the third quarter, Waste Connections brought in $1.41 billion in revenue, up 10%.

Ponte Vedra, Fla.-based Advanced Disposal Services brought in $1.4 million in revenue through its recycling business during the third quarter, down 62% year over year, according to a quarterly report (Recycling rebates paid to customers have been subtracted from recycling revenues to derive the numbers above).

The company’s recycling business hurt overall profitability during the quarter, according to a press release. Company EBITDA was $116.5 million, a figure that included a year-over-year decrease of $4.8 million because of lower recyclables prices and higher processing costs, the release stated.

Recycling now makes up about one-third of 1% of Advanced Disposal’s revenue. Overall, the company brought in $419.5 million during the third quarter, up nearly 5% year over year.

In April, the largest garbage and recycling company in North America, Waste Management, announced it would acquire Advanced Disposal. The deal is expected to close during the first quarter of 2020. Because of the pending acquisition, Advanced Disposal is not holding conference calls with investors to discuss financial results.

In a press release, John W. Casella, the company’s chairman and CEO, noted the company’s recycling operating income was a positive number, despite a nearly 25% year-over-year drop in commodity prices.

Recycling now makes up over 5% of the company’s revenue. Overall, Casella brought in $198.5 million during the third quarter, up nearly 15% year over year.