The company’s recently opened Plano, Texas MRF is using a positive-sorting approach, where equipment is programmed to target desired fiber items and remove them from the stream. That’s different from a traditional approach of using people and equipment to target the removal of contaminants, ideally leaving only desired papers at the end of the belt.

“Traditional methods of removing contaminants from paper based on size, shape and density create too much collateral damage for today’s high purity standards,” according to Van Dyk Recycling Solutions, which provided equipment for the facility.

The 77,000-square-foot single-stream facility processes material from over 510,000 residents and 2,500 commercial customers located in a variety of municipalities in the Dallas area. Opened in April, the plant replaces one that burned to the ground in December 2016. The Plano Star Courier newspaper reported the old facility sorted 15 tons an hour on outdated equipment, and it relied on manual sorting.

The glass system employs a specialized vibratory screen and density separator. The single-ram baler, a Bollegraaf HBC-120S model, is intended for paper and OCC but can be used for other commodities as well. 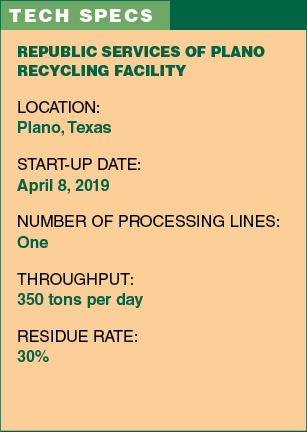 Given high incoming contamination and today’s tough recovered fiber markets, the facility was designed to use non-wrapping screens and optical sorters to make paper bales as clean as possible with minimal quality-control staff. A non-wrapping ONP screen, which has a larger shaft and specially shaped and spaced stars, is used to separate paper from containers. The fiber then goes to optical units, which fire positively on paper. Because the equipment generates a cleaner fiber stream, fewer workers are needed to remove non-fiber contamination at the end of the line.

The setup in Plano gives Republic Services “an unprecedented degree of flexibility” and the ability to respond to changes in the material stream, according to Van Dyk Recycling Solutions.

“Having multiple sensor optical sorting units on primary separation prepares a plant for the future,” according to the company. “The optical units can be reprogrammed on the spot to recognize and recover a different commodity, should the incoming stream undergo drastic changes. There are also four separate fiber storage bunkers to make OCC and three different grades of mixed paper that can be baled separately or blended.”

As far as employee health and safety is concerned, the line’s design allows sorting personnel to access all quality-control lines on a central platform without having to walk on the operating floor. That improves safety by reducing potential conflicts with vehicles. Dust collection equipment is present throughout the system.

The facility was also built with an education component. It has a 5,000-square-foot interactive learning center where visitors can view the sorting process from an observation deck, see educational videos and displays, and play interactive games.

The space includes a floor-to-ceiling tree made of recycled fiber. The learning center is oriented around helping visitors learn what is and isn’t accepted in their receptacles.