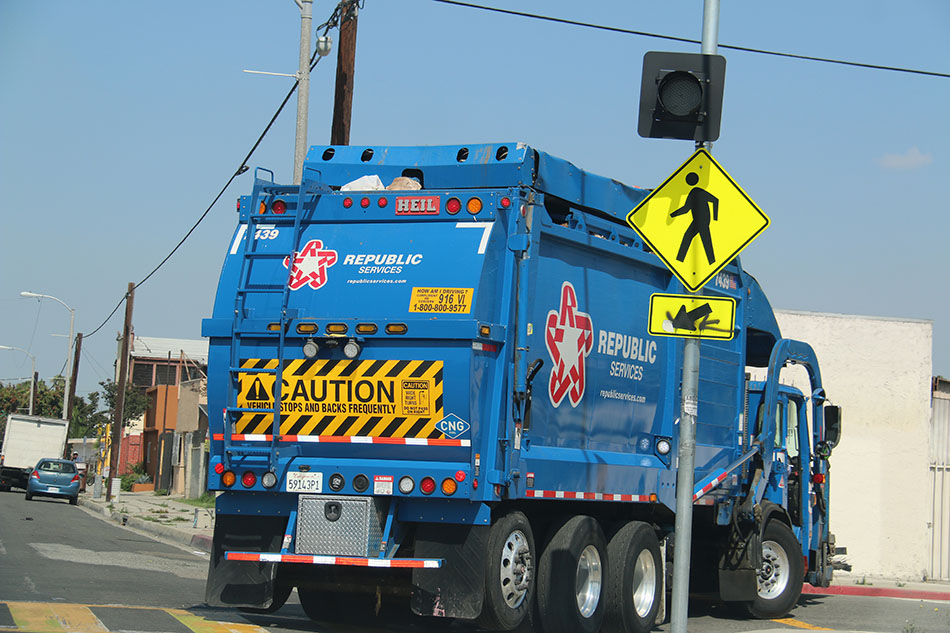 Waste Management CEO Jim Fish noted that OCC prices are at a 25-year low, and his company is not receiving any revenue for mixed-paper bales. Company officials can bring those realities to the table when negotiating contracts with municipalities, Fish said during a July 25 call with investors.

“So if there is a silver lining to a dark cloud, it’s that when we go in for a negotiation on these big contracts, we do have a pretty compelling story,” Fish said.

The companies’ financial results from the first quarter were covered in late April.

Recycling business ‘has really fallen off a cliff’

Waste Management’s recycling business brought in $264 million in revenue during the second quarter, down 13% year over year. For the first half of the year, the company’s recycling business brought in $555 million, down 10% year over year (Note: the numbers above exclude results from the company’s recyclables brokerage business).

The drops were because of lower recovered commodity values. Specifically, during the first quarter, average prices were $43 per ton, down 33% from a year prior. For the first half overall, average values of recyclables were 30% lower year over year.

The Houston-headquartered company pointed to paper markets as the reason.

“We have seen a decreased demand from paper mills around the world which has driven prices to historical low averages,” according to the company’s quarterly report. “The cardboard packaging industry has been impacted by slower global demand, retail store closures and e-commerce packaging efficiency. We expect slower global demand to remain through 2019, which will continue to put downward pressure on average market prices for recycling commodities.”

Waste Management reports it was able to partially offset the commodity sales drops by charging fees to cover the costs of contamination. The company reported in a press release that while its recycling revenues were down in the second quarter, its recycling earnings were up by $6 million year over year.

During a July 25 conference call with investors, John Morris, the company’s chief operating officer, said lower recycling expenses, restructured contracts and additional fees charged for contamination improved the earnings. Waste Management has restructured an estimated 40% of its contracts, he noted. Commercial customers are quicker to work with than municipal ones, where contracts are longer term and can involve other lines of business, franchises and post-collection contracts.

Fish added that the company is able to make the argument in renegotiations with municipalities that the current market isn’t the result of normal ebbs and flows. The recycling business “has really fallen off a cliff,” Fish said. He’s not optimistic prices will bounce significantly back because he sees fundamental changes in the recycling business, such as Amazon’s reduced packaging program and the accelerating closures of big box stores, he said, according to a transcript provided by Seeking Alpha.

The following is a look at key second-quarter recycling-related numbers from the two largest haulers in North America:

When asked whether Waste Management is landfilling recyclables, Morris said talent on the brokerage side has allowed the company to continue moving material to recycling markets without having to landfill recyclables.

‘We are transforming the recycling business’

Republic Services’ recycling business brought in $72 million in revenue during the second quarter, up nearly 6% year over year. For the first half of the year, the business collected $145 million in revenue, roughly flat from the year before.

Like Waste Management, Republic reported better profitability in the recycling business. Its earnings margin was 27.9% during the second quarter, up by 0.5 percentage points from the year before.

According to the company’s quarterly report, the prices Republic charged customers offset declines in the revenues the company received from commodity sales. The average price for recovered commodities (excluding glass and organics) was $78 per ton in the second quarter, down 14% year over year. For the first half of the year, the average commodity price was $86 per ton, down 16%.

“Our ability to increase revenue and overcome these headwinds demonstrates that we are transforming the recycling business into a more durable, economically sustainable business model,” Jon Vander Ark, president of Republic Services, said during a July 25 conference call with investors.

Republic recently announced 2030 sustainability goals, including a target to increase the tons recovered of key materials by 40% between 2017 and 2030. Those materials of focus are OCC, plastics, metals, organics, biogas and oil.

Recycling now makes up less than 3% of Republic’s revenue. Overall, the company brought in $2.6 billion in revenue during the second quarter, up 3% year over year. For the first half of the year, its revenues totaled $5.1 billion, also up nearly 3% year over year.