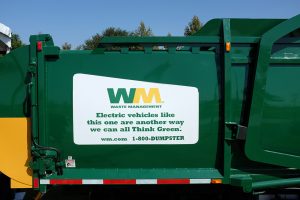 As recovered fiber prices continue to fall, so have recycling revenues for North America’s largest garbage and recycling companies.

The publicly traded giants have reported financial results for the first quarter of this year. Buoyed by their collection and landfill businesses, their total revenues were up year over year. But the better results came despite across-the-board drops in recycling revenue. Specifically, Waste Management’s recycling revenue was down 7.0%, Republic’s was down 3.8% and Waste Connections’ was down 16%.

Headquartered in Houston, Waste Management is, by far, the largest residential garbage and recycling company in North America. Republic Services and Waste Connections are the second and third largest.

Waste Management’s recycling operations brought in $291 million during the first quarter of 2019, down $21 million, or nearly 7.0%, year over year. That number excludes the company’s recyclables brokerage business.

Counting both the brokering and in-house recycling activities, Waste Management’s recycling revenues fell by $16 million year over year. The company noted a 7.0% increase in volumes handled by its brokerage business.

The company saw its total recycling commodities revenue fall by $25 million compared with the first quarter a year ago – the first quarter average price of recyclables was 28% lower. That was partially offset by assessing fees to cover the higher costs of handling contaminated recyclables, according to the company’s quarterly report.

“We performed well in the first quarter as a direct result of our ongoing fees for contamination, improving operating costs and restructuring municipal contracts,” John Morris, Waste Management’s chief operating officer, stated during an April 25 conference call with investors. A transcript of the call was provided by Seeking Alpha.

Later in the call, in response to a question about what a good profit margin should be for the recycling business, Morris said that the company is happy the 2019 quarter brought a profit but isn’t satisfied with the number. A good profit margin, based on the capital deployed, would be in the mid-teens, Morris said.

The company’s filings touched on the ongoing export market struggles. Waste Management noted that export demand for fiber remains stagnant because of China’s import restrictions and its 25% retaliatory tariffs on U.S. recovered fiber, as well as slower-growing economies in Europe, China and Mexico. Resource Recycling in February provided an in-depth look at continuing trouble in OCC exports to China.

Previously mentioned by company executives, Waste Management is building an advanced sorting facility in Chicago. The facility is expected to rely heavily on equipment, including optical sorters, to sort recyclables, Waste Management CEO Jim Fish said on the April 25 call. As a result, it’s expected to have an operating costs that’s 30% to 40% lower than the company’s current single-stream MRFs. The plant is expected to begin taking in material during the third or fourth quarter of this year.

The following is a look at key first-quarter recycling-related numbers from the three largest haulers in North America:

Waste Management’s overall revenue in the first quarter was nearly $3.7 billion, up 5% year over year. In the future, that figure is expected to get a lot bigger. In mid-April, the company announced it had entered an agreement to acquire Advanced Disposal Services, which is the fourth-largest residential garbage and recycling company in North America. Advanced serves the eastern half of the U.S. The deal, with a total value of nearly $5 billion, is the largest ever for Waste Management.

Republic Services’ recycling business brought in $73 million in revenue during the first quarter, down $3 million, or 3.8%, year over year.

According to the company’s quarterly filing, the average price for recovered commodities (excluding glass and organics) was $93 per ton during the first quarter, down 17% year over year. In April, that price fell further, to about $85 per ton.

Republic, like other haulers, has worked to renegotiate contracts with municipalities with an eye toward reducing market risk and ensuring the company receives a return on its recycling investments. During an April 25 conference call with investors, Jon Vander Ark, Republic’s chief operating officer, said the company has secured price increases from about 21% of its municipal collection customers. Overall, including commercial service, Republic is pushing forward with pricing increases on about 34% of its recycling business.

“We continue to take action to transform recycling into a more durable economically sustainable business model and more importantly we are making progress and seeing results,” Vander Ark said, according to a transcript from Seeking Alpha.

Recycling now makes up nearly 3.0% of Republic’s revenue. The company’s revenues, overall, totaled $2.47 billion during the first quarter, up 1.8% year over year.

Waste Connections’ recycling business brought in nearly $20 million in revenue during the first quarter, down nearly $4 million, or 17%, year over year. But, excluding the impact of acquisitions the company made since early 2018, the first-quarter revenue was $17 million, down $5.5 million or about 25%.

During the first quarter, revenues from sales recovered commodities decreased $5.3 million year over year. That was mainly because decreased overseas demand drove down prices for OCC and other fibers, according to the company’s quarterly filing.

During an April 25 conference call with investors, company President Worthing Jackman pointed to lower OCC and mixed-paper pricing as a reason for falling recycling revenue. Specifically, OCC averaged $77 per ton during the quarter, down 24% from a year prior and down 17% from the fourth quarter of 2018. Meanwhile, OCC prices have continued to drop and currently average $60 to $65 per ton, he noted.

Mixed-paper prices fell about 65% year over year and currently hover around negative $7 a ton.

“We see no impetus for improvement in recycled commodity values at this time,” Jackman told analysts, according to a transcript from Seeking Alpha.

Recycling now makes up 1.6% of Waste Connections’ revenue. Total company revenues in the first quarter were $1.24 billion, up 9% year over year.