Here’s what is (and isn’t) becoming law in California 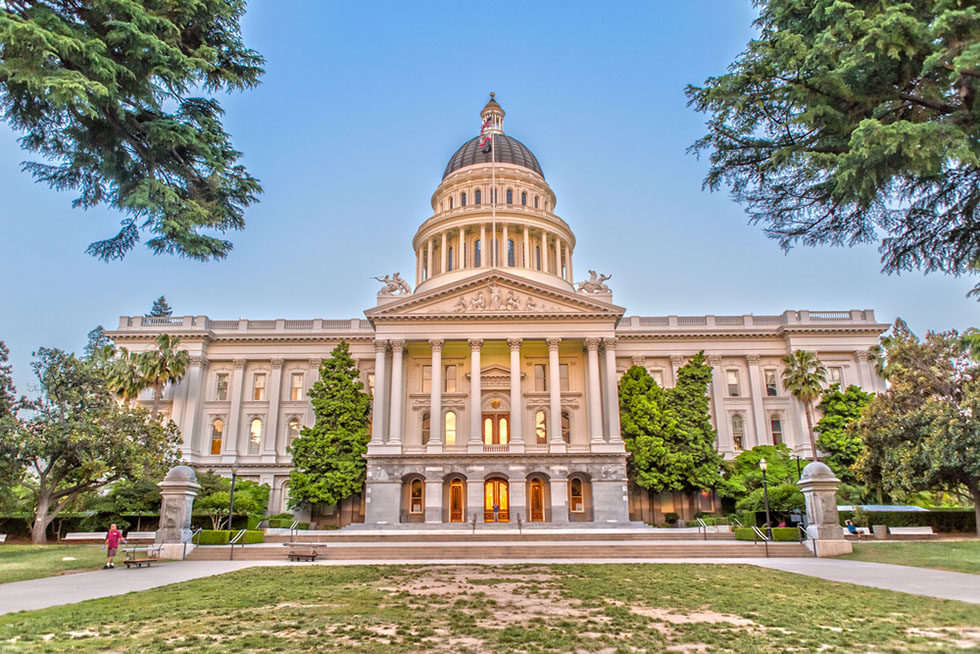 Among the bills Gov. Newsom signed is one that prohibits hotels from providing plastic single-use shampoo, conditioner and lotion bottles. | Susanne Pommer/Shutterstock

During his first year as governor of the country’s most populous state, the Democrat from San Francisco had a number of recycling-related bills land on his desk.

The following is a roundup of decisions Newsom made this year on several recycling-related bills:

The bill requires producers of beverages in the California Redemption Value (CRV) program to have 10% recycled plastic in their bottles by 2021 and 50% by 2030. It was described in the media, including by Plastics News, as the world’s toughest recycled-content mandate.

California law requires beverage producers to submit information on their virgin and recycled plastic use to the state. According to the latest reports, a relatively small number of them use any amount of recycled plastic in their bottles.

According to Newsom’s veto message, he objected to amendments that gave manufacturers an “out” from meeting the targets under certain circumstances. The legislation included a component stating that upon request from beverage companies, the California Department of Resources Recycling and Recovery (CalRecycle) was required to re-evaluate whether the mandates are realistic in light of market conditions, recycling rates, availability of food-grade recycled resin, recycling infrastructure capacity, and beverage manufacturers’ progress toward the targets.

Looking at those factors, the department could reduce or suspend the mandates. The department’s decision could also be appealed to an administrative law judge.

“While I support strong minimum recycled content standards, late amendments to this bill would result in a costly, burdensome process that undermines the worthy intent of this legislation,” Newsom wrote. “The waiver petitions allowed under this bill would put the burden on the state to prove to manufacturers that their products can meet recycling goals, rather than making clear that manufacturers have the responsibility to create products that can meet these goals.”

The amendments that gave manufacturers the possibility of a pass lessened opposition from beverage companies. Nestlé Waters North America had praised the final bill. The company reported earlier this year its containers sold in California averaged 37% recycled plastic, making it one of the largest consumers of recycled resin in the state.

After Newsom announced he wouldn’t sign the bill into law, AB 792 author Rep. Phil Ting, D-San Francisco, posted on social media he was disappointed by the decision. “I will continue to work on this issue in the coming year and hope that we can get this across the finish line,” he wrote.

On Oct. 12, Newsom signed Assembly Bill 54, which provides subsidies to help keep container redemption centers around the state in business.

Under state law, retailers selling CRV program drinks are required to redeem empty containers if the “convenience zone” they’re located in isn’t served by a standalone redemption center. In recent years, hundreds of redemption centers have gone out of business around the state, including the complete closure earlier this year of RePlanet, which was once one of the largest redemption center operators in the state.

That has meant more stores have become subject to the redemption requirements, although many haven’t been redeeming containers.

AB 54 provides a short-term exemption from that requirement for stores affected by the RePlanet closure, authorizes CalRecycle to spend $5 million to support container redemption pilot projects in unserved convenience zones, and approves providing another $5 million in subsidies to existing recycling centers.

The $5 million to redemption centers is on top of an earlier $5 million in subsidies legislators authorized when they approved the state budget this summer.

The bill was declared urgent. “Because of the unprecedented closures of recycling centers statewide, reduced access to redemption locations for consumers, declining recycling rates, and higher associated costs for grocers and retailers, it is necessary for this act to take effect immediately,” according to the legislation.

In signing the bill, Newsom released a statement calling it “an important but stopgap measure to address the recent closure of recycling centers throughout the state.”

“The California Beverage Container Recycling Program has long faced structural challenges and is in need of reform,” Newsom wrote. “I look forward to working with the Legislature in the coming year on a comprehensive solution for this program as part of the ongoing discussion about the future of how we manufacture, reduce, reuse, recycle and compost materials in California.”

Newsom on Oct. 9 signed Assembly Bill 1583, which makes a number of changes affecting recycling in the state.

First, it removes the requirement in state law that all plastic containers have the resin identification code and chasing arrows symbol.

Next, it reauthorizes a couple of recycling market subsidy programs. Specifically, it extends a market development program through which CalRecycle provides low-interest loans to recycling businesses. Originally set to expire on July 1, 2021, the program was extended to July 1, 2031. It also extends a program through which the California Alternative Energy and Advanced Transportation Financing Authority provides sales tax breaks for companies buying equipment to set up or expand recycling facilities. The program was set to expire Jan. 1, 2021, but the bill pushes the expiration date out to Jan. 1, 2026. Those programs provided millions of dollars in assistance to rPlanet Earth when it built its huge PET recycling facility in the Los Angeles area.

Additionally, AB 1583 directs CalRecycle to convene a Statewide Commission on Recycling Markets and Curbside Recycling. It would “issue policy recommendations to achieve specified market development goals and waste reduction goals and provide regular feedback to the department on public messaging designed to encourage proper recycling and to minimize contamination in curbside recycling programs,” according to the legislation.

Newsom on Oct. 2 signed Assembly Bill 827, which requires some businesses to offer their customers recycling and organics collection service. The requirement applies to businesses such as restaurants that are already required to subscribe to those services. AB 827 exempts full-service restaurants with waiter service. The bill goes into effect July 1, 2020.

Starting in 2023, it applies to all establishments with 50 or more rooms. It goes into effect for smaller hotels in 2024. The bill’s sponsor said California is the first state to ban the small bottles, according to The Sacramento Bee. The small bottles are difficult to recover at MRFs because they can fall through screens and join residue destined for disposal.

The California Legislature is in an interim recess during its 2019-20 legislative session. It reconvenes Jan. 6, 2020.

A version of this story appeared in Resource Recycling on October 15.