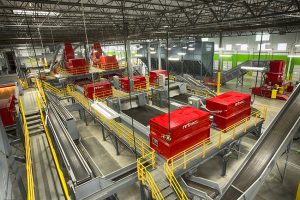 Bulk Handling Systems will provide robots and other sorting innovations for an upcoming PET recycling plant in Pennsylvania.

The Eugene, Ore.-based equipment manufacturer was selected to provide a plastics sorting system designed to handle 14 tons per hour. It will serve as the front end of a plant generating up to 80 million pounds of RPET pellets per year.

Last year, CarbonLITE announced it was building a PET recycling plant in the Lehigh Valley area of eastern Pennsylvania. The reclaimer, a supplier for Nestlé Waters North America and others, owns PET recycling plants in Riverside, Calif. and Dallas. BHS also supplied the sorting system for the Dallas plant, which opened in 2017.

According to a press release from Bulk Handling Systems (BHS), the front-end sorting system in Pennsylvania will be fully automated and designed to operate around the clock. An item recognition system with artificial intelligence will guide robots, which will provide quality control.

The system, called MAX-AI, will use multiple MAX-AI AQC-2 (autonomous quality control) units, each with dual robotic arms, to clean up the PET stream. The robots can perform up to 60 picks per minute. Plastics Recycling Update first wrote about MAX-AI in 2017.

The system will be integrated with scanners used by NRT optical sorters, improving the near infrared (NIR) sorters’ ability to identify materials. A BHS-owned company, NRT is based in Nashville, Tenn. MAX-AI will allow NRT SpydIR sorters to not only identify PET but also differentiate PET bottles, which CarbonLITE wants, from unwanted PET clamshells and trays. The MAX-AI system also recognizes black plastic.

The MAX-AI and other pieces of equipment will feed material stream data and performance metrics into what’s called the Total Intelligence Platform, which provides operators with both real-time and trending performance information.

Equipment installation is scheduled to conclude during the fourth quarter of 2019, and the plant is expected to be fully operational next year.