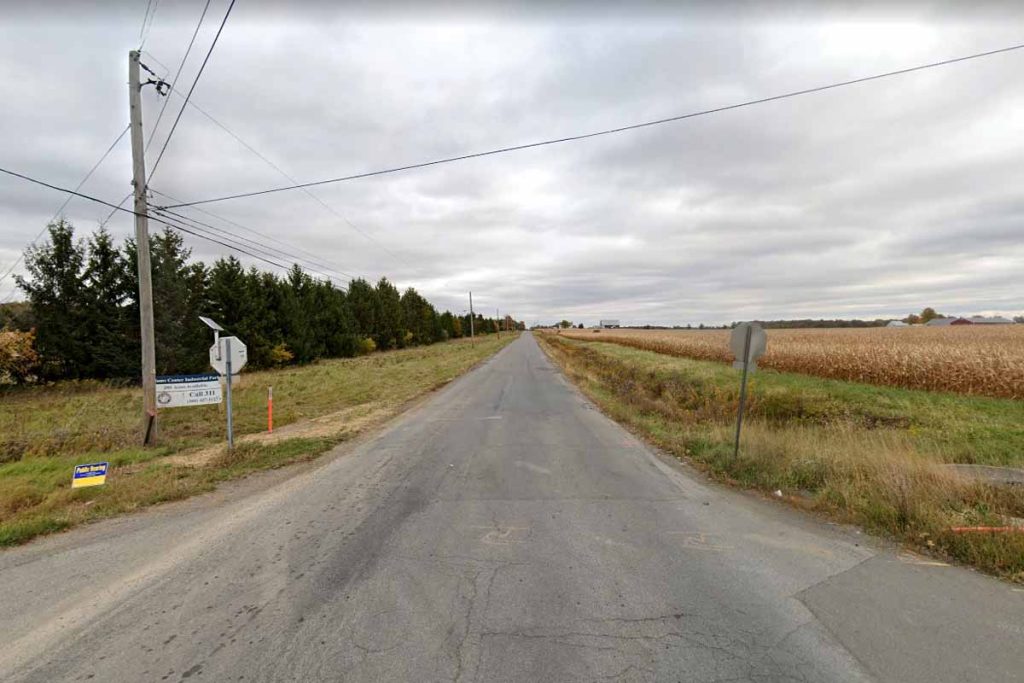 An October 2022 Google image showing the Bulmahns’ farm at right and the site of the planned Exurban smelter at left behind the trees. | Google Streetview

Owners of a farm across the road from a planned e-scrap smelter in Indiana filed a lawsuit seeking to halt the project, arguing that a facility of its type isn’t allowed by the local zoning code.

The dispute centers on metals recycling startup Exurban USA’s plan to build a smelter and refinery in Fort Wayne, Ind. The facility, estimated to cost at least $350 million, would take in scrap circuit boards and other metals-bearing scrap and produce purified metals.

A company co-founder told E-Scrap News in May the goal is to provide a low-carbon, domestically available circular economy option for the industry.

But the Bulmahn family isn’t keen on the project, which was approved by the Fort Wayne Plan Commission on Oct. 17.

Owners of a 57-acre farm across Paulding Road from the proposed site, the Bulmahns filed a lawsuit on Nov. 10 in an Allen County court asking a judge to nix the plan commission’s approval. The lawsuit was filed by David Bulmahn and his father and mother, Ronald and Janet Bulmahn, against the Fort Wayne Plan Commission, the Fort Wayne Department of Redevelopment, Exurban USA and Exurban Indiana LLC.

In their petition for judicial review, the Bulmahns argue that the facility does not meet the definition of a “recycling processing facility” allowed in the I2 General Industrial zone, which applies to the 76-acre property in question. They claim the zoning law limits “recycling processing facilities” to those more akin to a materials recovery facility (MRF) that handles paper and packaging from households.

The Bulmahns also argue that the smelter will greatly reduce the value of their farmland, which the family has owned and worked for about 150 years.

Exurban USA released a statement to local media covering the dispute saying the lawsuit is “without merit” and stating they’re working to see if they can reach a resolution with the plaintiffs in a timely manner.

Exurban USA is co-founded by Wes Adams and Jean-Paul Deco. Adams told local media the company would work to familiarize local residents with the company and its recycling process. In a document submitted to the plan commission and uploaded as an exhibit to the lawsuit, Adams wrote that “at every step Exurban will comply with all federal, state and local laws regarding the operation of this facility, including seeking all applicable environmental permits,” including air quality permits from the state.

In his letter, he also emphasized the economic impacts of the development, noting that the site is expected to employ 155 people with average salaries between $50,000 and $70,000 a year.

Greater Fort Wayne Business Weekly reported that the Indiana Economic Development Corporation agreed, based on Exurban’s job creation performance, to provide up to $2.5 million in tax credits and up to $200,000 in conditional training grants.

The project is part of a recent trend of metals companies investing in smelters and upstream e-scrap collection and processing operations in North America. Global copper producer Aurubis is planning a secondary smelter in Augusta, Ga., and Igneo Technologies, which has a secondary smelter in France, is working to build a similar facility in Savannah, Ga.

But the Exurban project is also among the smelter projects that have run into resistance from local residents and environmental groups. Aurubis has faced pushback from local group Savannah Riverkeeper. And air pollution concerns have prompted additional scrutiny of even Glencore’s Horne Smelter, which has been in business for decades.