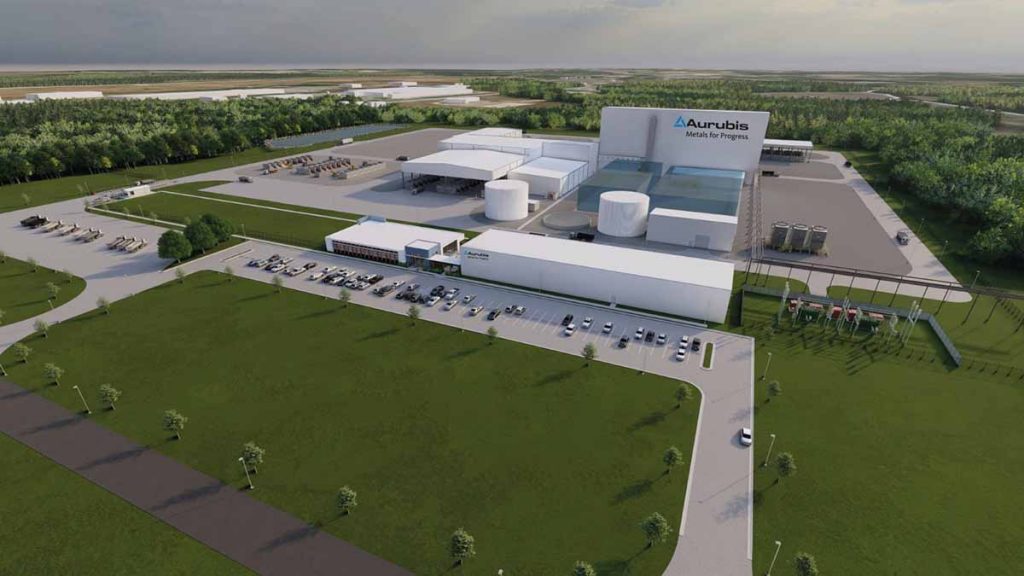 The recently announced Georgia plant would be able to process 90,000 metric tons of recovered materials. | Courtesy of Aurubis

One of the world’s largest copper producers this week laid out plans for a $345 million smelter in Georgia to process printed circuit boards, cables and other scrap materials into an intermediate copper product.

Germany-headquartered Aurubis on Nov. 10 announced its project to build a secondary smelter in Augusta, Ga. One of the largest copper recyclers in the world, Aurubis said it will be the first secondary smelter for multi-metal recycling in the U.S.

It’s the second major downstream project for U.S. e-scrap to be announced in the last couple of weeks. The other was from Igneo Technologies, which also plans to build a large metals recovery plant in that area of Georgia. Igneo is connected to French e-scrap metals recycling company WEEE Metallica.

Aurubis said its Augusta plant will be able to process 90,000 metric tons of recovered materials, according to a news release. At full capacity, the facility will annually produce up to 35,000 metric tons of blister copper, which is an intermediate copper product that’s partly purified and has a blistered surface from the smelting process. An Aurubis fact sheet noted the smelter will use “metallurgical technologies that are proven in the market yet still innovative.”

In the release, Aurubis said the Georgia facility, which is a two-hour-and-15-minute drive from the Port of Savannah, will ship some of the intermediate metal products to the company’s European smelters. These facilities will further refine the mix into pure industrial and precious metals. But the Georgia plant also expects to sell some of its output to U.S. companies for further processing.

The new site is in Richmond County, Ga., and the company is calling it “Aurubis Richmond, USA.” Aurubis said it plans to invest about 300 million euros (worth about $345 million at Nov. 10 exchange rates) in the project, which will create over 100 jobs. The facility will be built on 150 acres at the Augusta Corporate Park, according to an announcement from the governor’s office.

“With this investment, we’re setting a clear example of sustainable growth and will become a forerunner for multi-metal recycling in the U.S. as well – a role that we already have in Europe now,” Roland Harings, CEO of Aurubis, stated in the release.

Construction is scheduled to begin in summer 2022, and commissioning is set for early 2024. Full production capacity could be reached in the 2025-26 fiscal year, according to Aurubis.