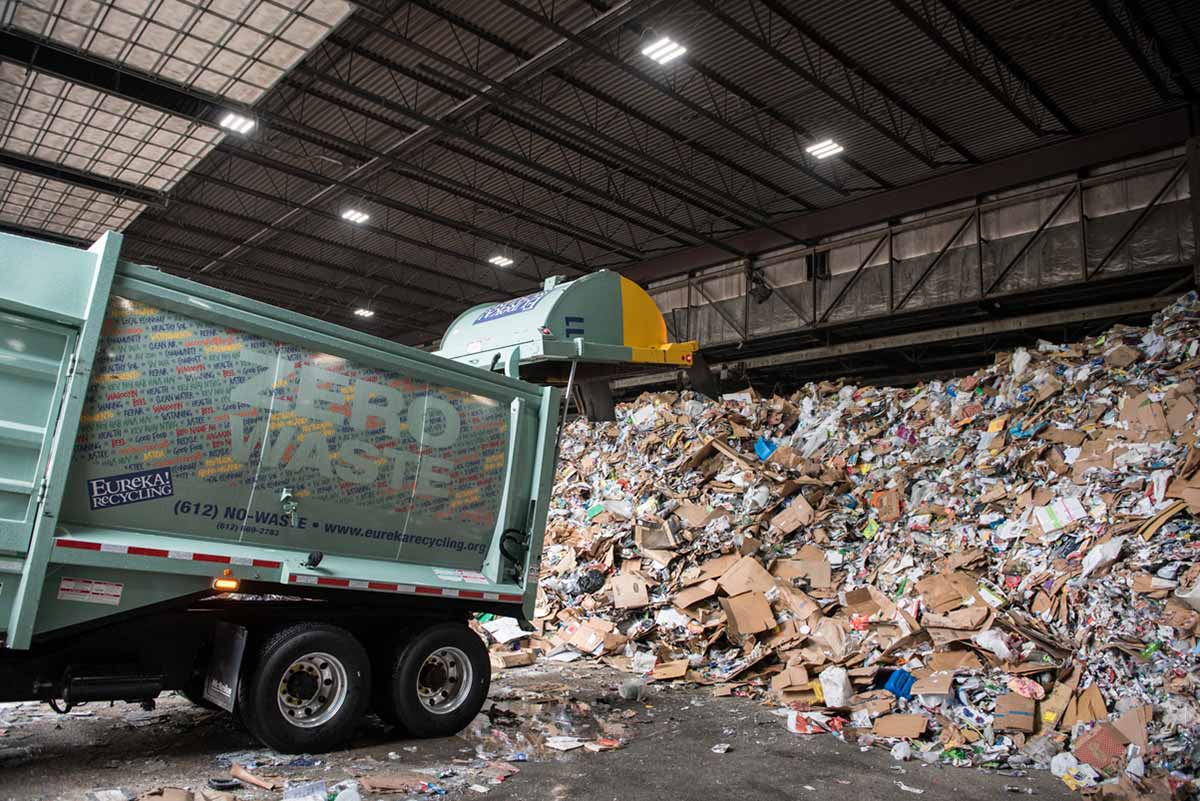 Eureka Recycling, which operates a MRF in Minneapolis, is a member of the Alliance of Mission-Based Recyclers, which criticized plastics-to-fuel processes. | Courtesy of Eureka Recycling

The Alliance of Mission-Based Recyclers called plastics-to-fuel processes “false solutions,” though the group of nonprofit recyclers says it is more open to technologies that are geared toward production of recycled resin.

“The end goals of any plastics recycling should be to reduce reliance on virgin fossil fuels and support a circular economy,” Lynn Hoffman, national coordinator for AMBR and co-president of Eureka Recycling, stated in a press release. “Every recycling system should be evaluated based on its ability to meet these goals, and chemical recycling fails the test.”

AMBR is made up of Eureka Recycling in Minneapolis; Eco-Cycle in Boulder, Colo.; Ecology Center in Berkeley, Calif.; and Recycle Ann Arbor of Ann Arbor, Mich. All run MRFs except Ecology Center, which collects curbside recyclables.

The terms “chemical recycling” and “advanced recycling” generally refer to a wide array of processes that use heat, pressure and solvents to break down the molecular chains of polymers into liquids or gases that can then be processed into fuels, oils, waxes, new plastics, or other chemical products.

They’re in contrast to the “mechanical recycling” of plastics, which generally refers to steps such as shredding/grinding, washing/drying, melting and extruding scrap plastic. Such processes leave the polymers’ molecular chains intact.

One report is an eight-page overview document. The other is a more detailed 21-page guide for legislators, investors and municipalities.

Many of the comments in the report mirror those the AMBR made to the U.S. EPA a year ago, when EPA was seeking comments on what the agency should count in the nation’s recycling rate.

The AMBR reports don’t completely slam the door on chemical recycling technologies, leaving some space for methods that return recovered resin to the plastics manufacturing pipeline.

“These plastics-to-plastics (PTP) recycling technologies have the potential to complement mechanical recycling programs, but they are also the least developed and most expensive ‘chemical recycling’ processes,” AMBR stated in the eight-page report. “They may play a role in reducing plastic pollution and fossil fuel use, but only when integrated into a larger systemic strategy to reduce, reuse, and then recycle necessary plastic packaging and products.”

A number of companies have announced investment in chemical recycling plants for the production of new plastic.

For example, Eastman is spending up to $250 million on a facility in Kingsport, Tenn., and the company announced plans for a $1 billion depolymerization plant in France. Public relations consultants working for the company have been consistently issuing press releases about new consumer products made with Eastman’s chemically recycled resins.

Despite the drumbeat of announcements about chemical recycling investments, the sector is still relatively nascent, with the vast majority of plastic used in manufacturing today continuing to be virgin material.

In a statement in response to the AMBR reports, the American Chemistry Council (ACC), which represents plastics producers, noted that plastics companies have invested billions into the technologies to convert more used plastics into new plastic and products. ACC says that since 2017, over 70 projects have been announced, representing $7.7 billion in investments. They have the potential to divert at least 12.1 billion pounds of plastic from landfills, said Joshua Baca, vice president of plastics at ACC.

“Calling advanced recycling a process that ‘burns plastic’ or is focused only on making fuels ignores the facts and is an effort to try to keep plastics out of our economy,” Baca said. “Advanced recycling is a game-changing technology that is critical to accelerating a circular economy. Today it is producing top-quality new plastics that are suitable for the most demanding applications, including food contact, pharmaceutical and medical use.”

In its analysis, AMBR said plastics-to-plastics technologies could be viable if they meet several criteria.

Those include the following: They rely on transparent reviews of environmental and human health impacts, address gaps that aren’t already being filled by mechanical recycling, recover at least 75% of incoming feedstock, maintain valid agreements with buyers using the outputs in new products or packaging, and pay a price for feedstock that at least covers MRFs’ sorting and sales costs.