US fiber exports rebound after two years of declines 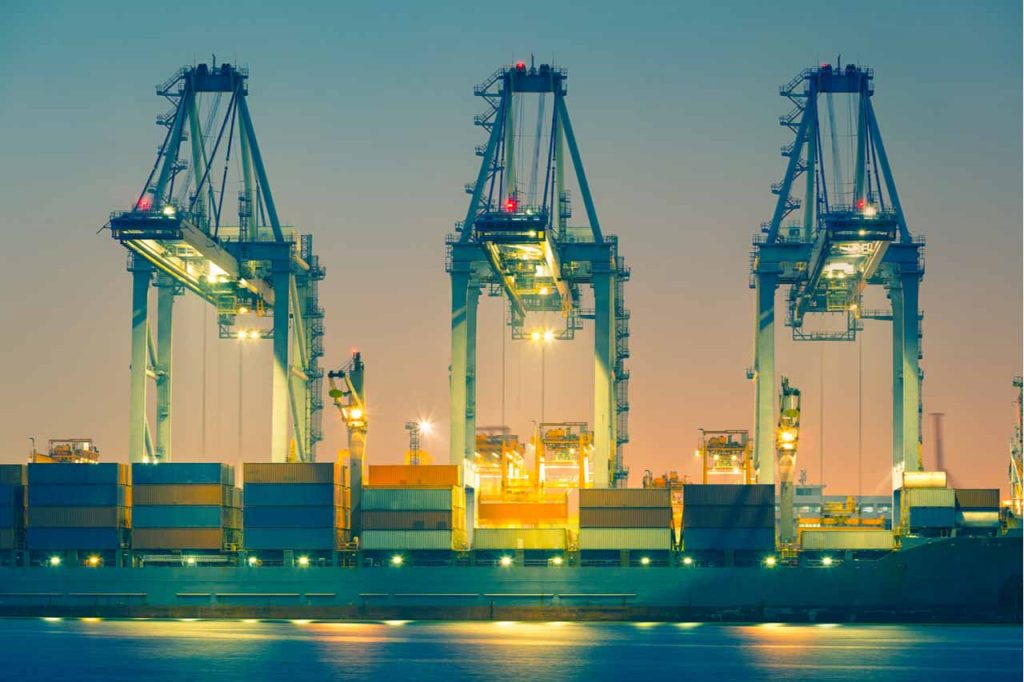 Scrap fiber exports to China collapsed in 2021, but the rest of the world more than made up the difference. Scrap plastics, however, continued their years-long decline in shipments.

The U.S. Census Bureau recently released trade data for the fourth quarter of 2021, allowing Resource Recycling to calculate full-year 2021 numbers and compare them with prior years.

The data shows that U.S. companies exported 17.97 million short tons of recovered fiber (including both papers and cardboard) in 2021, up from 15.95 million short tons from the prior year, or up 13%. The upward move marked a reversal of two years of declines, which had been precipitated by China’s National Sword campaign.

Plastics, however, continued the declines they’ve experienced since National Sword began curtailing Chinese imports of certain materials starting in 2018. The U.S. exported 1.21 billion pounds of scrap plastics in 2021, down from 1.38 billion pounds the year before, or down about 12%. 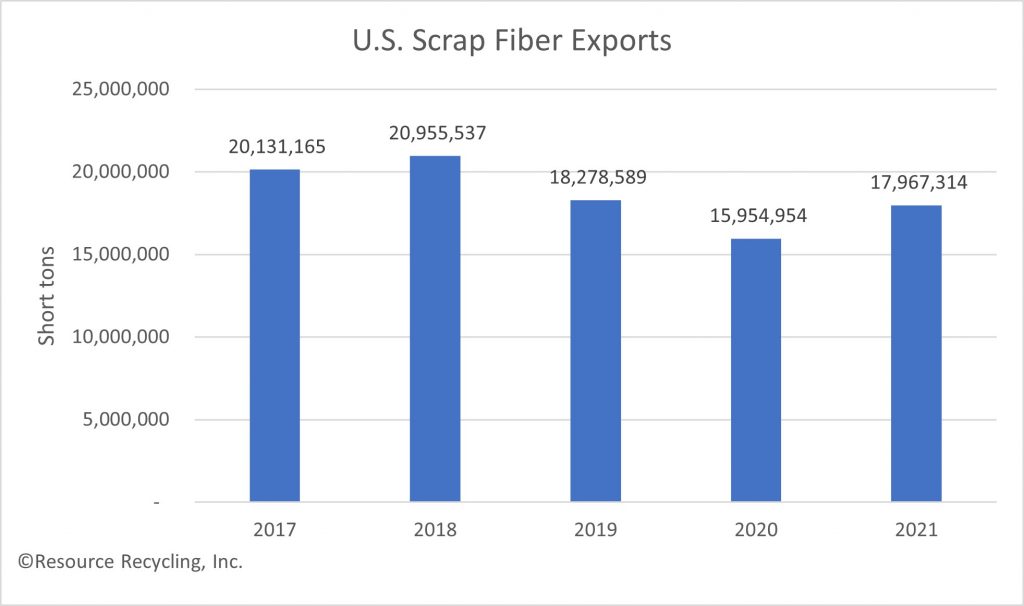 They were all largely making up from a collapse in shipments to China, which took in 89% less. Specifically, China imported 548,000 short tons of U.S. scrap fiber in 2021, down from 4.97 million the year before. Finally, shipments to South Korea declined by 3%. 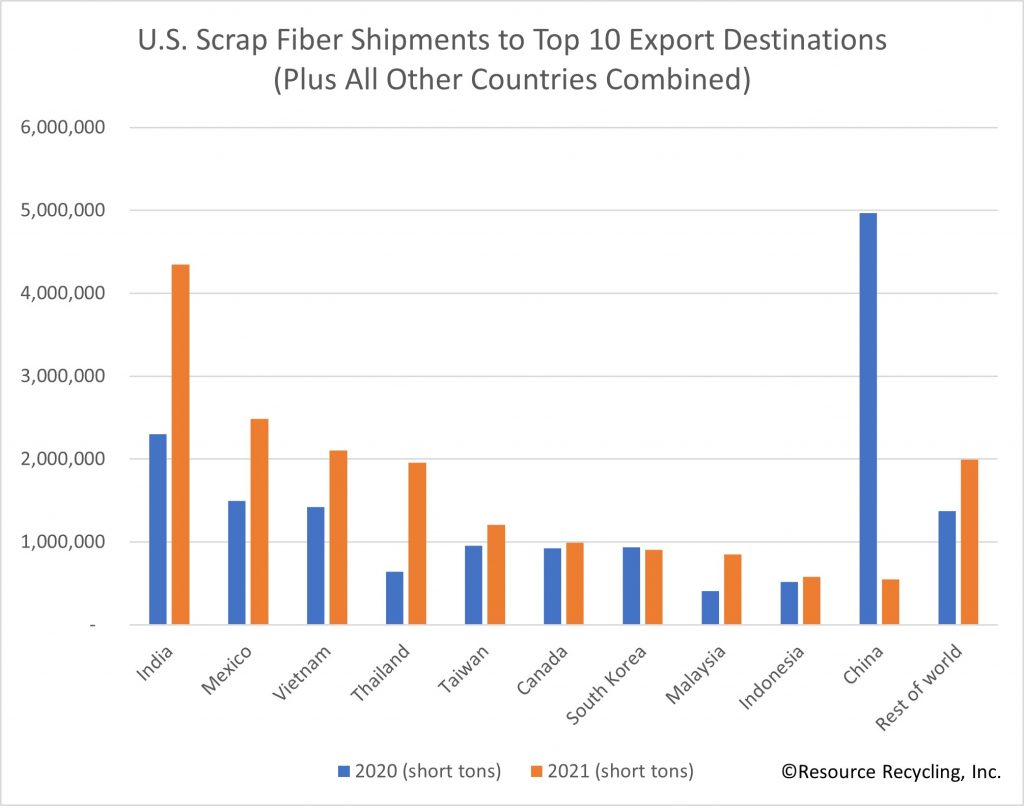 The downward move in scrap plastic shipments last year continues a years-long decline. In 2017, the year China’s National Sword campaign was first announced but had not yet gone into full effect, the U.S. exported 3.68 billion pounds. 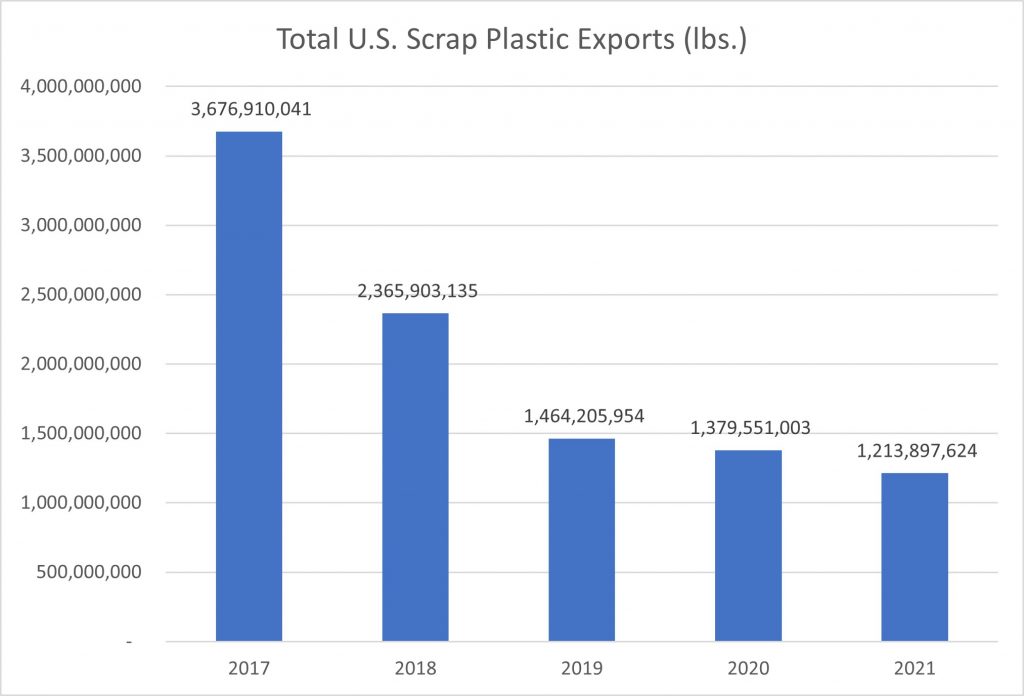 As was the case with fiber, 2021 brought wild swings in weights shipped to different countries. Those countries receiving considerably more of the U.S.’s scrap plastic included India (up 110%), El Salvador (up 77%), Mexico (up 34%), Indonesia (up 27%) and Canada (up 2%). 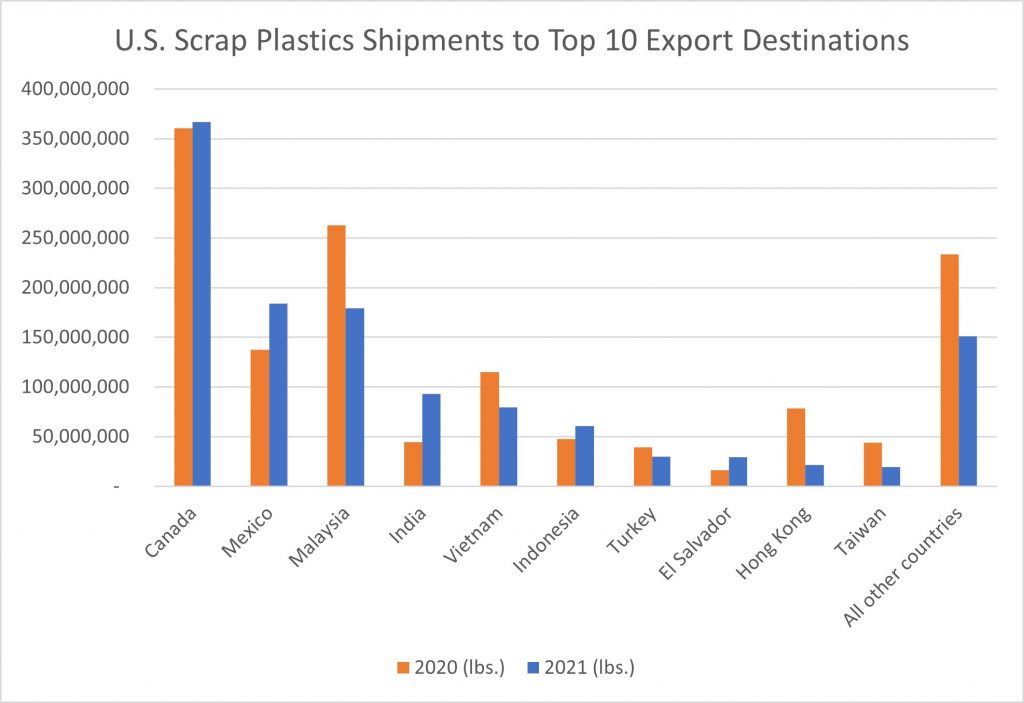 Canada remains, by far, the largest destination for scrap plastic bales. The U.S.’s neighbor to the north jumped into the No. 1 spot starting in 2019, following Malaysia’s National Sword-inspired crackdown on imports.

Starting in 2021, an amendment to the The Basel Convention on the Control of Transboundary Movements of Hazardous Wastes and Their Disposal went into effect. The amendment intended to further regulate the global trade in plastics, banning shipments of certain types of material. The U.S. and Canada negotiated an agreement that continued allowing the countries to trade without the additional Basel controls, however.

Since the Basel Convention amendment went into effect, environmental justice activists have pressured shipping lines to stop accepting cargo that consists of plastic waste. The latest line to announce a halt to the practice was CMA CGM Group, the third-largest ocean freight line in the world.