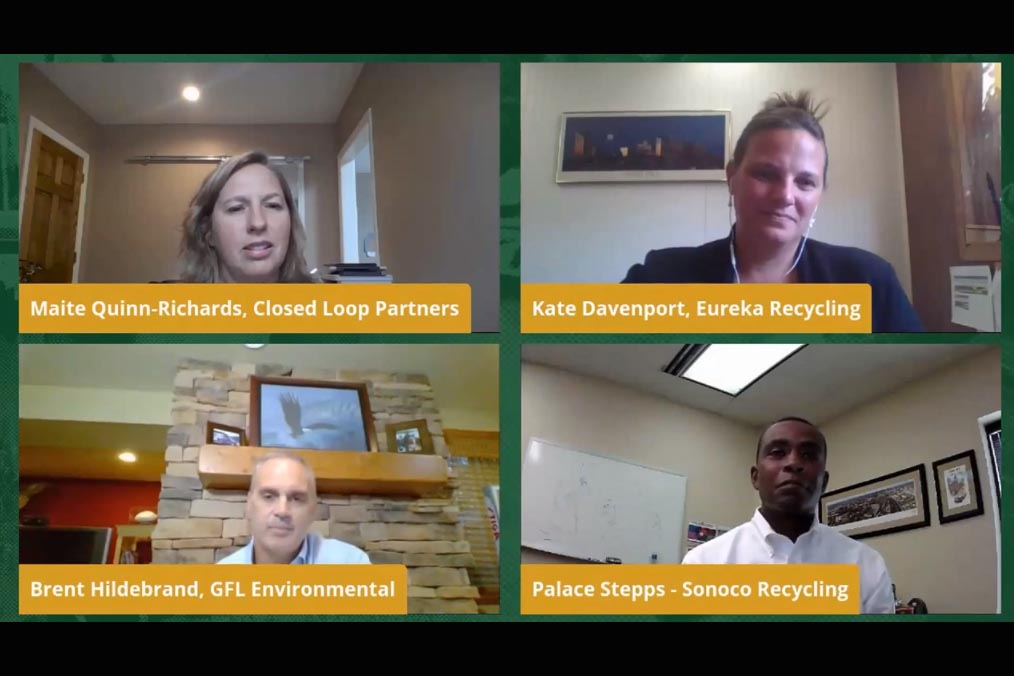 MRF operators shared their insights in a session at this year’s Resource Recycling Conference, held virtually in August.

During the session, the three shared how they prepared and responded to China’s import restrictions, including Green Fence in 2013, National Sword in 2018 and the country’s import bans that took effect this year.

Leading up to the ban

Sonoco Recycling is a hauler and MRF operator that is connected to packaging and industrial products giant Sonoco Products. Stepps said his company had doubts about whether a ban on fiber imports could actually come about in China. Such skepticism was common in 2017, given China’s status as the largest consumer of mixed paper in the world at the time.

“From the paper division standpoint, we didn’t believe that the Chinese could actually follow through on what they had promised to do, simply because of market dynamics,” he explained. With a lack of sufficient domestic collection within China, as well as a lack of available virgin fiber in the country, many industry observers anticipated a ban was simply not feasible because of the Chinese paper industry’s demand for feedstock.

“Up to the very last month when they were issuing permits to import OCC, we believed there might be some sort of change of mind, if you will, from the government’s vantage point,” Stepps said.

But the Chinese government indeed banned imports of mixed paper beginning in 2018, and it expanded the restrictions to shut out OCC and all other recovered fiber at the start of 2021.

For some MRF operators, previous planning helped mitigate the impact of the overseas restrictions. Minneapolis-based Eureka Recycling, for example, had never accepted some of the low-value plastics that were hit hard by the ban.

“We’ve approached recycling really from having an environmental benefit, always having a philosophy of knowing where our material is going, traceability,” Davenport said. The organization wanted to know its recyclables were truly finding end uses, she said.

That mindset drove Eureka’s decision to only accept PET, HDPE and PP, rather than accepting all of the typical mixed plastic resins. The decision had some earlier drawbacks: Eureka lost a couple city contracts because the municipal programs wanted to have an “all plastics in” message, Davenport noted. But it set Eureka up to weather the plastics market strife when China closed the door.

“So as other … programs really struggled with what to do with those 3-7 bales, we didn’t,” Davenport said. “I think that’s a lesson for the rest of the industry, in that we really do need to understand what’s happening to material, and what’s it getting turned into, not just does someone want to buy it.”

Mixed-paper markets collapsed in the wake of China’s National Sword, which officially took effect at the start of 2018. By January of that year, mixed paper was trading for about $32 per ton, down from $84 per ton a year earlier, according to RecyclingMarkets.net.

By the start of 2019, mixed paper had dropped to less than $5 per ton. At times, the grade dropped below $0 per ton, meaning MRFs were paying to get rid of it.

For Sonoco, the company’s position as an integrated recycling and manufacturing company proved beneficial for moving mixed paper during the market strife.

“We had internal uses. One of the things we did was put more through our paper mills than we had historically, is probably the largest and most noted change,” Stepps said. Sonoco first announced it was investing to increase its recovered fiber consumption capacity in 2018, and the company has continued those efforts into this year.

Non-integrated MRFs found that long-term contracts they had in place helped them continue moving paper amid the turmoil.

“We’ve always, as an independent, been really focused on quality, which has meant that we’ve gotten long-term contracts with folks,” Davenport said. “We had a long-term contract with a paper mill for all of our paper grades. That really helped us in terms of weathering that storm.”

She added that Eureka still felt the impact from declining fiber prices, but that the ability to move paper was important.

Davenport also noted Eureka’s focus on contracts meant it was probably losing some potential revenue during times when paper prices shot up, because Eureka wasn’t playing the market.

“But in terms of how that averaged out overall, I think it’s benefited us,” she said.

Hildebrand of GFL Environmental, a U.S. and Canadian hauler and MRF operator, offered a similar perspective. He agreed that long-term contracts even out over time, in terms of losing out on premium prices but maintaining movement during down markets.

“I think it helps everybody in the chain,” he said. “It helps the mill know what’s coming. It helps the processor budget a little better.”

Upstream contracting is also key to weathering market storms, Hildebrand noted. MRF contracts with local programs or haulers were “out of whack for a lot of people” before the China market shift, he said. Some examples include contracts that guaranteed the MRF would pay the local program for recyclables, regardless of market dynamics, as well as contracts that didn’t specify any quality thresholds for collected materials.

These types of contracts between municipal programs and MRFs have declined, and contracts in general have shifted dramatically in the past few years.

“I think inbound contract management is a massive piece to how a facility operates as well,” Hildebrand said.

The market fluctuations driven by China’s ban came during another major industry shift, with e-commerce leading to more and more OCC in the residential stream. The two forces compounded each other, with MRFs struggling to move material they’d always been able to move, and simultaneously dealing with changes in what they could expect coming in the doors.

Eureka has spent between $1.5 million and $2 million every two years or so on facility upgrades, Davenport said. That money has gone toward new optical sorters and, beginning this year, robotics to pull plastics and aluminum out of the paper stream.

Davenport said one reason Eureka chose to invest in robotic sorting is that the equipment requires less MRF downtime for installation than other systems.

“I think it’s something that’s not talked about adequately, which is it’s really hard for a MRF to shut down for even two weeks to install new equipment,” she said. “I think that’s a challenge we’re going to keep needing to talk about. We can’t stop the flow of inbound material to shut down, to completely reconfigure and install some of the new technology that’s out there.”

“That’s been huge for us,” Stepps said.

When you’re getting 8 cents a pound for polypropylene, that’s not covering the cost of the $750,000 to $1 million optic,” she said. “But when you’re talking about some of the values we’re seeing right now, we are, and I think that’s a really important thing to highlight, particularly as we’re talking about policy and EPR. I think it highlights the need for the value of material to cover the investments that are needed.”