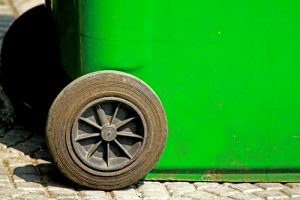 It appears the first quarter was the crest of a price wave that has since broken. Since then, all three publicly traded companies reported tumbling fiber prices moving into April, with Waste Management suggesting China’s anti-smuggling crackdown, known as “National Sword,” was contributing to lower prices (see related article on falling fiber prices).

The following is a breakdown of revenues for the three largest publicly traded companies involved in residential recycling in North America. The data was reported in filings with the U.S. Securities and Exchange Commission (SEC).

Prices for recovered commodities surged from 2016 levels. Waste Management enjoyed commodity prices in the first quarter that were 56 percent higher year over year. Looking strictly at commodities sold out of the company’s own MRFs, prices were up nearly 70 percent, according to a company press release.

The higher prices were a continuation of trends seen last year.

Overall, Waste Management’s total revenue was $3.44 billion during the first quarter of 2017, up 8 percent over the prior-year period. Company leadership described it as the largest organic growth in revenue in more than a decade, and much of it was attributed to higher commodity prices.

The company’s net income for the quarter was $298 million, up nearly 16 percent from the year before.

The Phoenix-headquartered company generated $133.9 million in revenue from the sale of recyclable commodities during the first quarter of 2017, up 54 percent over the prior-year period, according to a press release.

Chuck Serianni, chief financial officer for Republic, told investors on an April 27 conference call that average commodity prices, excluding glass and organics, were $162 per ton, up 60 percent from the prior-year period.

Overall, Republic brought in $2.39 billion in revenue during the first quarter, up 6.4 percent over the prior-year period. The company’s net income was $187.8 million, up 19.7 percent.

Waste Connections acquired the former Canadian company Progressive Waste Solutions effective June 1, 2016. Excluding the revenue impacts of the acquisition, Waste Connections brought in $17.1 million in recycling revenue during the first quarter, up about 70 percent over the prior-year-period, Ron Mittelstaedt, the company’s chairman and CEO, told investors during an April 27 conference call.

The increase was primarily due to higher fiber prices. Specifically, OCC averaged $165 per ton during the first quarter, up 68 percent from the prior-year period and up 32 percent from the fourth quarter of 2016, Mittelstaedt said.

As was the case for Waste Management and Republic, the recycling revenue increase in the first quarter for Waste Connections was a continuation of rising prices late last year.

Recycling now makes up about 3.8 percent of the company’s revenue.

Other stories related to U.S. haulers