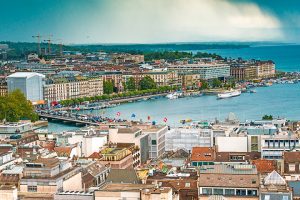 The scrap plastic trade will receive focus this week in Switzerland, where countries are meeting to discuss and consider amending global waste regulations.

The Basel Convention, an international treaty governing how waste is moved around the world, kicked off its annual meeting in Geneva on April 30. Each year, representatives from member states convene to discuss updates to the treaty. This year, scrap plastic is grabbing significant attention.

Last June, the government of Norway proposed an amendment to the Basel Convention, focused on boosting regulation of scrap plastic shipping. The proposal would create a waste category for plastics under the international treaty — plastic is currently considered as part of a wider household waste designation. The Norwegian proposal stated that “by explicitly including plastic waste in the scope of the Basel Convention, these waste streams can be controlled, and mismanagement of plastic waste avoided.”

The Norwegian government noted that its goal is to clamp down on plastic pollution in the environment. But the Institute of Scrap Recycling Industries (ISRI), a trade association, said it views recycling as part of the solution to marine plastics, not the problem.

According to the Convention schedule, the Norwegian proposal will be discussed on May 4.

The Basel Convention previously convened an expert group that has examined the barriers preventing effective marine plastics reduction. During the current meeting, delegates will consider the creation of a Partnership on Plastic Wastes group, which would investigate several plastic waste reduction strategies for the next two years. Additionally, the full conference may consider a draft resolution setting various targets related to reducing plastic waste.

But the Norwegian proposal has raised concern among the recycling industry for its potential ripple impact on scrap plastic exports, which have already significantly diminished in the face of Chinese and Southeast Asian import restrictions.

There are 185 states and the European Union that are parties to the convention; the U.S. and Haiti have signed but not ratified it. Experts told Plastics Recycling Update that for party countries, Norway’s amendment would require shipments of scrap plastic to have prior notification and consent from regulators in both the exporting and importing countries.

But it’s unclear how exactly the proposal would impact U.S. exporters. Because the U.S. is not a party to the convention, it could prohibit U.S. exporters from sending material to Basel-party countries. All of the largest U.S. export destinations fall into this category.