Court records detail how much material was stored at each 5R site, estimated cleanup costs and who will shoulder the financial burden of removing the hazardous waste. | Boonchuay1970/Shutterstock

A property owner paid $1.1 million to clean up e-scrap abandoned by 5R Processors in Tennessee. State regulators say a similar effort in Wisconsin will cost close to $2 million – and could come out of public funds.

Cost figures and details about e-scrap materials left behind at the shuttered 5R facilities were recently disclosed in restitution documents, which were filed in the criminal proceedings against former company executives.

Prosecutors say 5R Processors stockpiled millions of pounds of CRT materials and other e-scrap at locations in Wisconsin and Tennessee. They allege the former company leaders concealed the stockpiles, operated without proper permits, committed tax violations and more.

Other former company leaders Thomas Drake and Kevin Shibilski have ongoing criminal cases related to their actions with the company.

The recent court records shed light on how much material was stored at each site, estimated cleanup costs and who will shoulder the financial burden of removing the hazardous waste.

In total, the company left nearly 9.9 million pounds of hazardous waste at its sites, including crushed CRT glass, broken and intact CRTs, whole TVs and other assorted e-scrap. The total cleanup cost for the Tennessee site and six Wisconsin sites was estimated at nearly $3.1 million. The Tennessee location has already been cleaned up but cleanup work remained in Wisconsin as of the court filing in late January.

According to the restitution memorandum, 5R did not obtain a hazardous waste storage permit and did not obtain a surety bond to cover the costs of cleanup. In Tennessee, that meant the landlord was on the hook for project costs. In Wisconsin, the state Department of Natural Resources is “stuck cleaning up the hazardous waste without reimbursement from a surety bond,” according to the filing. “This means Wisconsin taxpayers are left on the hook for cleaning up 5R’s illegally stored hazardous waste.”

The state will seek reimbursement from 5R’s former leaders through a civil lawsuit, the filing continues. But if no or too little outside funding is secured, taxpayers will ultimately foot some or all of the bill.

In January, the U.S. District Court for the Western District of Wisconsin ordered Moss to pay restitution covering the full costs of the Wisconsin and Tennessee cleanups, but in the order, Judge William Conley said Moss “does not have the economic resources to allow him to make full payment of restitution in the foreseeable future under any reasonable schedule of payments.”

Instead, the court ordered Moss to begin making payments of $100 per month after his release from prison. 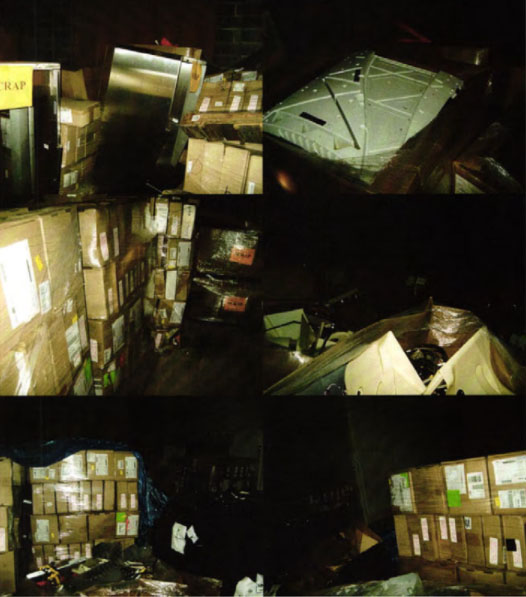 The landlord for 5R’s Morristown, Tenn. location facilitated its cleanup in 2019. The e-scrap processor rented the property from 2012 to 2015, and when 5R collapsed, it left behind more than 7 million pounds of crushed CRT glass, panel glass, intact CRTs and whole TVs.

The processor had been ordered by state regulators to clean up the site but failed to do so, leaving landlord Paint Oak LLC with the cleanup task. The landlord ultimately paid more than $1.1 million to various contractors to dispose of the materials, according to the court filing.

Cleanups at the Wisconsin sites have yet to be completed. The Wisconsin Department of Natural Resources (WDNR) obtained quotes to deal with all six Wisconsin locations. The cost estimates came from discussions late last year between the state and Veolia North America, which operates an electronics recycling facility in Port Washington, Wis.

“In December 2020, Veolia provided quotes of $0.67 per pound to dispose of cathode ray tube (CRT) waste and miscellaneous electronics with monitors,” a WDNR field operations director wrote in a January 2021 declaration. “Veolia quoted cleanup costs of $0.55 per pound for miscellaneous electronics without monitors. Finally, Veolia provided an estimate of $0.81 per pound to dispose of flat panel televisions.”

The site conditions, costs and weight of material to be cleaned up in Wisconsin is as follows:

The site consisted of five semitrailers owned by 5R, likely containing hazardous waste, which were left at a site rented from the city of Ladysmith and county government. The state estimated a $44,700 cost to clean up 60,000 pounds.

This site consisted of one 5R-owned semitrailer left at a warehouse on city property. The state estimated a $8,940 cost to clean up 12,000 pounds of hazardous waste.

The location consisted of three 5R-owned semitrailers on city property. The state estimated a $26,820 cost to clean up 36,000 pounds of hazardous waste.

This site consisted of a warehouse 5R rented from a private landlord. The state estimates an $829,200 cost to clean up 1.2 million pounds of crushed CRT glass.

This property is owned by 5R. It includes warehouses, an operations building and a parking lot with five semitrailers. The state estimated a $506,288 cost to remove 730,000 pounds of hazardous waste at this site, including 650,000 pounds of CRT glass and 80,000 pounds of “computer-related peripheral plastics,” as well as laboratory equipment and chemicals located on the property.