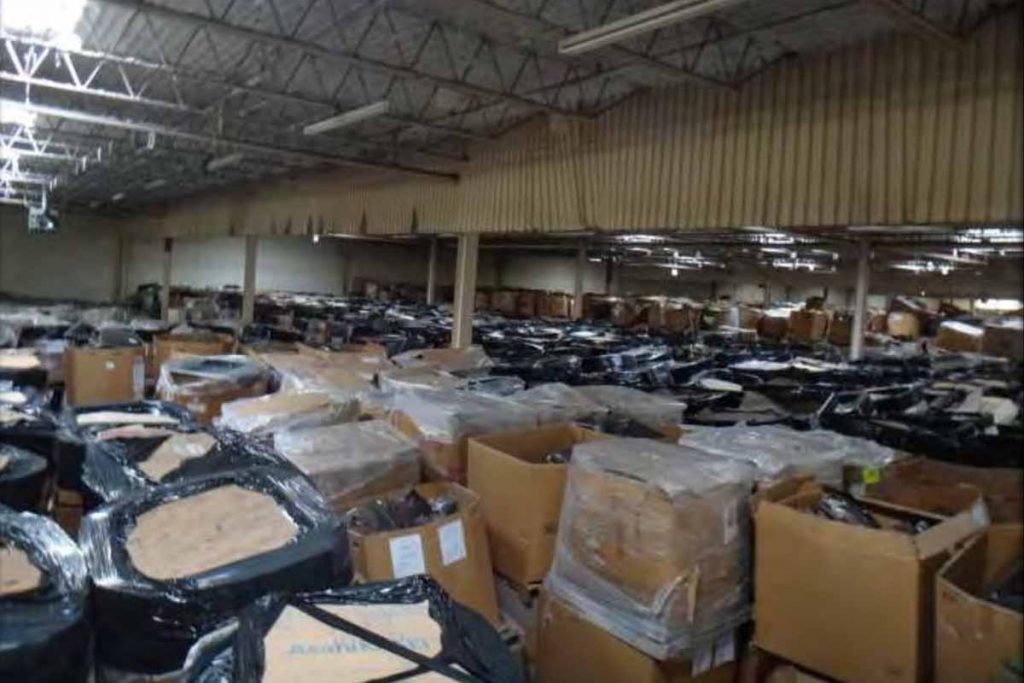 An overview of the abandoned material at the former Closed Loop facility on Fairwood Avenue in Columbus, Ohio. | Courtesy of DEC Enviro

Consultants estimate that recycling 30 million pounds of CRT glass at an Ohio warehouse would add $1.7 million to a $5 million cleanup bill, so they’re proposing to landfill the glass instead.

Closed Loop failed in early 2016, leaving behind stockpiles of CRT glass totaling hundreds of millions of pounds in Arizona and Ohio.

In Ohio, property investment company Garrison Southfield Park owns two warehouses along Watkins Road that hold 128 million pounds of CRT materials. Less than two miles away, on Fairwood Avenue, sits the Olymbec USA warehouse with about 30 million pounds. Both landowners have sued over 40 former suppliers of CRTs to Closed Loop, and two dozen settlements have been reached.

In April, EnSafe, a consulting firm working for both landowners, submitted a cleanup plan to the Ohio EPA for the Watkins Road warehouses. The firm posted the May 2020 cleanup plan for Fairwood Avenue in the last few weeks.

“Olymbec USA LLC is looking forward to achieving the goals of the cleanup plan that has been subjected to public notice and comment,” according to a statement from the company to E-Scrap News. “Olymbec USA LLC and its representatives have worked diligently and cooperatively with the Ohio Environmental Protection Agency to develop a plan that is sufficiently protective of human health and the environment and that can be implemented in an efficient and cost effective manner.”

Cost complications from condition of material

Closed Loop Refining and Recovery started leasing space at 2200 Fairwood Ave. in December 2014. Today, about 90% of the space is taken up by boxes of CRT devices and CRT glass. The boxes were stacked an average of three high, with some of them having collapsed to the floor or against the inside side of the structure.

The plan makes clear the glass at Fairwood Avenue is likely destined for landfill, because of the way Closed Loop handled it. That’s also the case for most of what’s in storage at the Watkins Road sites.

“As currently proposed, processed and non-processed CRT units and other e-waste materials stored in the Fairwood Avenue warehouse will be disposed as RCRA hazardous waste and will not be recycled under the [Resource Conservation and Recovery Act] CRT conditional exclusion and Ohio state corollaries,” the plan states.

That decision is based on the fact that recycling the material instead of landfilling it would add 5.5 cents per pound in costs, amounting to a total project cost increase of $1.7 million, or 35%. The higher cost is due to unprocessed CRTs having already been stripped of their valuable metals and the processed glass being a mix of funnel and panel glass, which means higher lead smelting costs, the plan states. 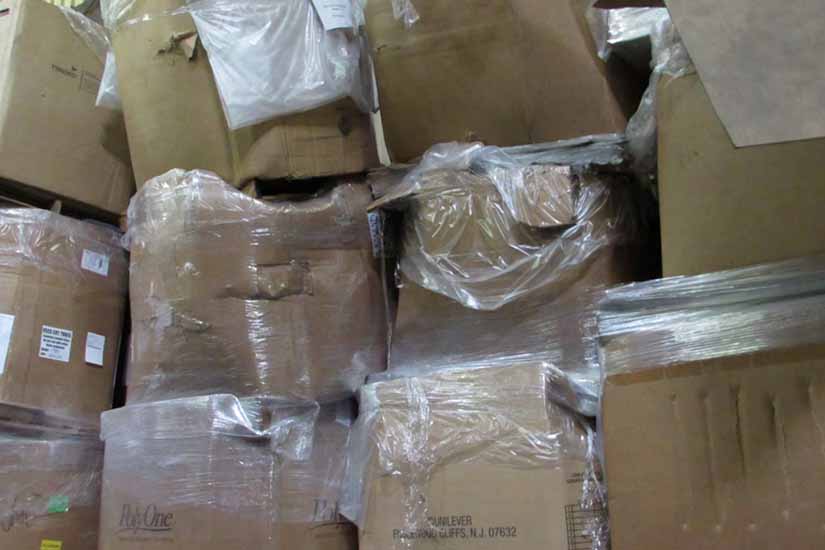 As is the case with EnSafe’s cleanup plan for the Watkins Road properties, the Fairwood Avenue calls for a multi-phased approach.

In the first step, crews will create contamination-reduction and clean-loading zones, through which they’ll move boxes of material for loading into trailers. Then, they’ll remove all materials. This second phase will involve cleaning leaded dust off of material, repacking material if necessary, and weighing, labeling and loading it in a truck trailer. Lastly, crews will decontaminate the building.

The plan estimates materials removal costs at $3.73 million, decontamination at $479,000, site preparation and lead abatement at $475,000, and project management and oversight at $372,000, for a total project cost of $5.06 million. That sum doesn’t count about $109,000 Olymbec has spent to date on consultants and removal of hydrofluoric acid and glass washing sludge, according to the plan.

For materials removal, specifically, the documents estimate the cost to remove non-processed CRTs at 12.50 cents per pound and crushed CRT glass as 10.55 cents per pound. The May 2020 plan notes that three companies recently submitted bids to clean out material: Novotec, Hepaco and URT. The plan documents indicate that a contractor hasn’t been formally selected yet.

A February 2019 report from a different consulting firm, DEC Enviro, identified two other companies that had previously submitted quotes for removing materials from Olymbec USA’s warehouse: Kuusakoski and MAX Environmental.

DEC Enviro noted Kuusakoski and its related companies originally shipped to Closed Loop as much as 40% of the material at the Ohio facilities. It said MAX Environmental operates a landfill in Yukon, Pa. where it’s permitted to treat and dispose of hazardous waste. It operates one of three landfills where Novotec proposed to dispose of material cleaned out of the Watkins Road warehouses.

Neither Kuusakoski nor MAX Environmental were identified as current bidders in the May 2020 cleanup documents. 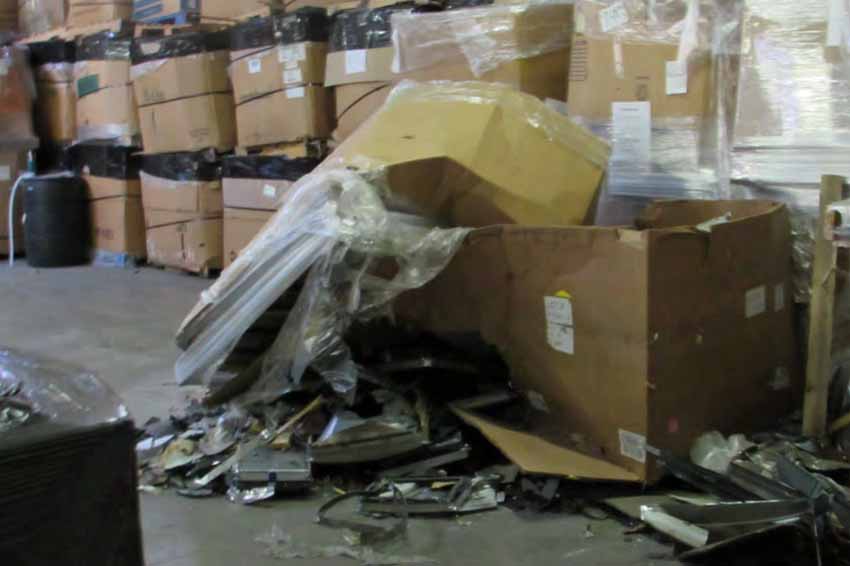 As is the case with the Watkins Road facilities, EnSafe’s plan calls for the building to be decontaminated after CRT materials are removed. That’s because there’s lead dust inside.

For site preparation, lead abatement and decontamination work, bids were submitted by Hepaco, Aztec, Enviroserve and HEPA. As is the case with the material removal contractors, the May 2020 plan states a decontamination contractor has not yet been formally selected.

So far, only a limited amount of cleanup has occurred at Olymbec USA’s facility.

In July 2017, crews removed hydrofluoric acid and lead-bearing sludge that was being stored inside. The materials were byproducts of a glass-washing process that had taken place there. According to EnSafe’s cleanup plan, Closed Loop halted the glass washing in summer 2015 after some processing equipment broke.