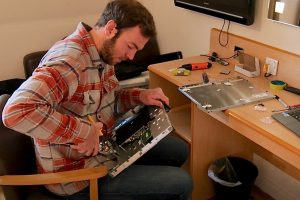 The study found that out of more than 300 end-of-life devices deployed with GPS trackers, 3.5 percent were exported to developing countries, which are identified as those not included in the Organisation for Economic Co-operation and Development (OECD) list of member countries.

The report, titled “Holes in the Circular Economy: WEEE Leakage from Europe,” highlights the exported devices as indicative of problems within the EU’s producer responsibility framework and wider circular economy ambitions. The term “leakage” is commonly used in European countries in reference to devices that leave the EU’s electronics recycling system.

But Basel Action Network (BAN) also puts the results in context, comparing them with previous studies the group has completed, particularly in the U.S.

“The EU offences we have revealed are less flagrant than those we found taking place in the United States,” BAN Executive Director Jim Puckett wrote in the report. “If Europe is leaking, the U.S. is hemorrhaging.”

Of the 314 devices deployed in the EU study, 19 were exported from the countries in which they were dropped off for recycling. Eleven of those ended up in developing countries as defined by the OECD.

BAN rated each export as “likely legal,” “unknown” or “likely illegal.” The latter category was judged based on whether the destination country was outside the OECD list. BAN contends that shipping non-functional devices, which the group says is hazardous waste, to non-OECD countries constitutes violation of the Basel Convention.

Exported devices came from Germany, Ireland, Italy, Poland, Spain and the U.K. Of the exports BAN identified as “likely illegal,” five went to Nigeria and one each went to Ghana, Hong Kong, Pakistan, Tanzania, Thailand and Ukraine.

The U.K. was the largest source of exports, with five exported devices originating there. Three of those ended up in Nigeria, and one each arrived in Pakistan and Tanzania.

Devices were deployed in 10 EU countries between April and September 2017, with the numbers going to each country roughly proportional to that nation’s population, according to BAN. The study deployed 143 LCD monitors, 55 CRT monitors, 65 desktop computers and 51 printers.

Nine of the 11 devices that went to developing countries were LCD monitors, one was a CRT monitor and one was a desktop computer. 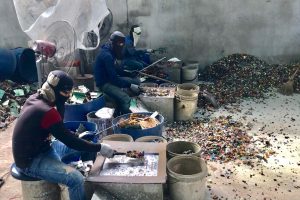 Devices were deployed in a variety of collection settings, including municipal collection centers, private company collection sites, and less formal locations such as street corners.

“We did not intentionally target what might have appeared to be high-risk locations,” BAN stated. “Nevertheless, we did make some street drops because we know that despite the convenience of the collection centers, it is even more convenient to simple set old computers and monitors on the street.  This remains a common practice throughout European cities.”

In its discussion of the results, BAN uses the export figures to extrapolate a larger e-scrap export trend across Europe. However, the group includes a cautionary note that “due to the relatively small sample size of our tracking programs, our reported rates and extrapolations based on them are given only as indicative.”