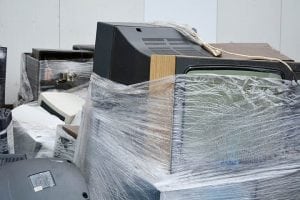 Illinois-headquartered Com2, which uses glass to produce a glaze for ceramics, has seen its processing activity cut in half over the past year.

Com2 had outlined plans last summer to expand its CRT glass processing business and open up a plant in the Southeast. But the company’s CEO, Saheem Baloch, said that move is no longer being considered.

“Com2’s supply of CRT TVs has dropped 15 to 18 percent,” Baloch told E-Scrap News in an email. “With the supply now noticeably dropping, we are concerned that if we invest, we will not get the return we initially forecasted.”

Founded in 2002, the company has developed a process at its Carol Stream, Ill. headquarters to mix CRT glass, chemicals and minerals and produce a glaze product aimed primarily at the ceramics industry.

According to Baloch, the firm is currently processing 50 to 60 tons of intact CRT devices per day, a significant drop off from the 100 tons per day it was processing in June of 2017.

“All of our backlog has already been cleared,” Baloch explained, noting that Com2 is seeing less CRTs come in through its doors than in years past.

While Baloch said the “shrinking market overall” is to blame for Com2’s lower processing figures, little data exists on the national CRT stream and it’s unclear whether volumes have greatly reduced for the industry as a whole. Several state recycling programs have reported seeing CRT volumes plateau, however, and some have seen numbers begin to fall.

Asked whether there have been any additional disruptions in service or demand, Baloch said, “It is simply that the supply is reduced.”

Baloch said the company currently works with around a half-dozen tile manufacturers in Brazil. In 2017, the firm sent 8 million pounds of glaze product there, and Baloch said he expects anywhere from 10 million to 14 million pounds will be sent to South America this year.

The increase in shipments would seem to run contrary to the firm’s lower processing figures, but Baloch explained Com2 had built up a reserve of cleaned glass in 2017 that has since been mixed and exported in 2018.

According to Baloch, Com2 has had discussions with a number of other potential downstream outlets around the world, including some in China, India, Mexico, Spain and the United Arab Emirates.

“Samples have been sent and initial testing is completed by the potential buyers,” Baloch noted. “They are now running more comprehensive tests.”

The company’s efforts to develop more downstream partnerships come as it rejiggers its processing infrastructure.

In June of last year, the firm outlined plans for a facility in Savannah, Ga. that was slated to open later that summer and add processing capacity. But that didn’t pan out.

“The landlord couldn’t provide us the power required and promised,” Baloch said.  “Once we realized it would not work, we decided not to start all over from scratch because of [the] diminishing CRT supply.”

In April 2018, the firm closed a second site in Carol Stream and moved all of its processing operations to its 200,000-square-foot headquarters on Kehoe Boulevard. “It saved us packaging, repackaging and transportation costs,” Baloch said.

Baloch noted the company has made improvements to its health and safety procedures, including adding extra monitoring, testing and training for its employees. Com2 was cited and fined by the Occupational Safety and Health Administration in 2012 for exposing workers to lead and other hazards. It was later cleared by the federal agency.

The firm has also added more machinery at the Illinois plant “to reduce human interaction as much as possible.”

When it comes to material procurement, Baloch noted the company is “not looking for [the] lowest bid anymore” and has found that “upstream suppliers are looking for reliability and security.”

“Our process is domestic, more reliable, secured and is audited by one of the well-known auditing organizations of the industry,” Baloch added.