Amid shipping crisis, recycling loads often ‘first to get cut’ 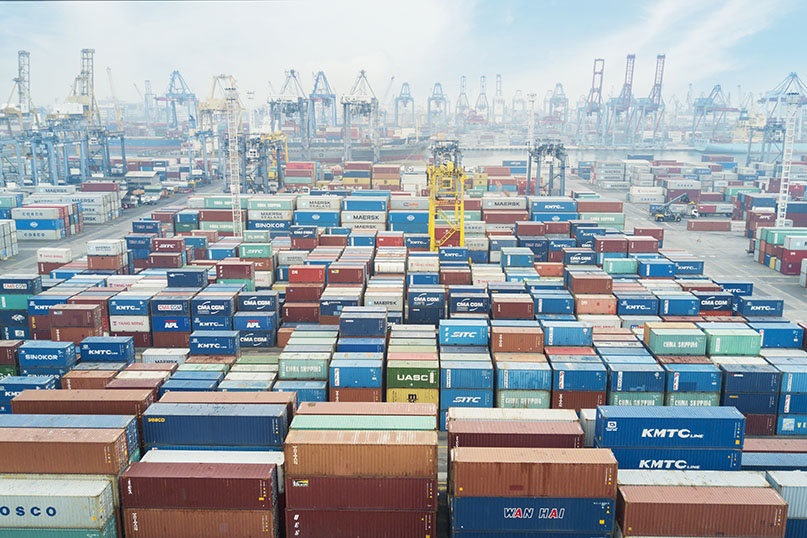 Broadly speaking, the global logistics crisis was spurred by a short-term decline in shipping demand at the beginning of the pandemic, followed by an unprecedented surge that continues today.

The results have been clogged ports leading to ships idling at sea, truckers waiting in line for hours and fast-rising shipping rates. Meanwhile, the situation has drawn the attention of the federal government.

For a few reasons, the recycling sector has it worse than other industries that export and import goods. One is the relatively low value of scrap materials, making it harder to compete with higher-value finished products, one exporter told Resource Recycling.

“When space needs to get cut, ours is the first to get cut,” stated the exporter, who spoke on the condition of anonymity.

At the beginning of the pandemic, stay-at-home orders and the general feeling of uncertainty slowed most economic activity.

That led to a slowdown in demand for containerships, explained Bill Rooney, vice president of strategic development at Kuehne & Nagel, a freight forwarding firm. Rooney spoke during an Oct. 13 session hosted by the Northeast Recycling Council (NERC) and moderated by the Northeast Resource Recovery Association (NRRA).

Companies responded by taking some ships out of commission and other steps to reduce active vessels, Rooney explained.

But the demand decline was short-lived. Although spending on services remained low, spending on products increased rapidly, as consumers looked to outfit home offices, work on home-improvement projects, install home gyms, and more.

The fast return of spending on products created a shortage, Rooney said.

“All of that cargo all of a sudden hit the network, and a network which had been reduced in size, both based upon no cargo moving in the beginning of COVID, … and in prior years trade hadn’t been growing that much,” he explained. “All of a sudden you had a set of assets that were overcome by a very large increase in the amount of cargo moving, and that’s what got this kicked off.”

As one indicator of the sharp increase, Rooney pointed to a measurement of port throughput, showing the difference between January-May 2019 and the same period this year. North American imports from Asia were up 30% during this year’s period.

“There is no set of fixed assets in the world that can handle a 30% increase in volume. It’s just not going to happen,” he said. “Everything got overwhelmed.”

The results? Rooney displayed a map showing cargo ship activity at the ports of Los Angeles and Long Beach on Oct. 13. Rooney noted there are typically zero ships drifting – at most, one or two – but that on that day, there were 58 ships drifting outside the ports because there was no room for them. And he said that is a slight improvement from a previous time he counted close to 70 ships.

That is impacting schedule reliability, he added. For U.S. exporters, ships from the U.S. to Asia are on time only 20% of the time right now, Rooney said. The average late time for ships westbound across the Pacific Ocean is eight days, he said.

The shipping delays have rippled into other sectors of goods transportation, particularly trucking. Rooney said inland truck wait times have increased markedly. He showed charts indicating trucks are waiting four hours in line to pick up and drop off loads in Chicago and between one and four hours in Memphis, with similar situations elsewhere.

“That’s obviously a big problem for truckers, who are trying to do multiple turns in a day to make more money, and it’s hard to do very many turns in Chicago if you’re waiting four hours in line,” Rooney said.

The U.S. exporter said scrap, often the lowest-value commodity on the ship, is the last material to get a shipment because customers in other industries will pay more.

Rooney, who is a former president of Hanjin America, noted the rate a shipper is willing to pay is the key determinant of whether cargo gets carried or not. In the U.S., shipping companies prioritize imports, which are almost always going to be higher-paying loads than exports, he said.

“If it’s financially advantageous, they will move it,” he said.

The anonymous U.S. exporter said shipping companies want their containers back in China, because that’s where the bulk of goods are being exported from. In some cases, shipping lines have opted to send their empty containers directly to China rather than accept a load of scrap materials headed for Southeast Asia, because the logistical convenience seemingly outweighs the money a U.S. exporter would pay, the U.S. exporter said.

“Financially, it can be better off moving an empty back to Europe or Asia to get a much higher-paying load … than moving an export load from the United States, which is going to tie a box up for another six weeks,” Rooney said.

That exact scenario was referenced by U.S. lawmakers who introduced a shipping reform bill over the summer.

Rep. John Garamendi, D-Calif., said his office received reports from agricultural exporters alleging that “ocean carriers refused to accept cargo bookings for U.S. exports, instead choosing to send empty canisters back to the Asia-Pacific, as quickly as possible to refill with foreign exports during the pandemic.”

The bill, which would enact a number of provisions to address alleged unfair shipping practices, was introduced in the U.S. House of Representatives on Aug. 10 and has been referred to the House Committee on Transportation and Infrastructure.

The shipping situation has also drawn the attention of the White House. President Joe Biden touched on the shipping strife during Oct. 14 remarks about wider supply chain challenges, and the White House has convened a group of business, port and union leaders in an effort to tackle the problems.

Containerships leaving U.S. ports often make a number of stops on the way to their destination. When China is one of those intermediary destinations, that has become a problem for some scrap material exporters.

But Adler said shipping lines are often avoiding carrying loads of scrap if the ship stops in China at all, even if the scrap material is ultimately headed to another destination, such as Malaysia.

The shortages are having financial impacts for exporters, as well. The U.S. exporter of recovered materials said rates for shipping scrap loads have tripled or even quadrupled over the past year.

Adler said some recycling companies are reporting paying even more, up to 10 times more than what they are used to spending on shipping rates.

Shipping company CMA-CGM in September described a sharp increase in shipping rates, ramping up around the beginning of 2021.

“Container shipping spot freight rates have continued to rise due to port congestion and the major imbalance between demand and maritime container transport effective capacity,” the company wrote in an update to customers. CMA-CGM added it would freeze its spot rates despite the market-driven rate increases, “prioritizing its long-term relationship with customers in the face of an unprecedented situation in the shipping industry.”

Little light at the end of a long tunnel

Major shipping companies are adding capacity in response to the strife.

Hapag-Lloyd in August announced it had ordered 75,000 new shipping containers that would be manufactured in China and delivered for use in the fourth quarter of the year.

In a statement, Hapag-Lloyd CEO Rolf Jansen said the turnaround time for containers once they reach their destination is typically about 50 days, but that in recent months the company has seen that increase to 60 days and longer. The longer delays are due to “massive congestion at ports, terminals and inland operations worldwide,” Jansen said.

“This means that today about 20 percent more containers are bound in shipment while transporting the same amount of cargo [as] before the crisis,” he said.

The company has ordered 625,000 shipping containers since the beginning of 2020, according to the announcement.

Similar to Hapag-Lloyd, CMA-CGM has expanded significantly during the pandemic. The company reported adding 780,000 containers since April 2020.

Still, increasing capacity doesn’t necessarily solve the problem immediately, Rooney explained. Some of the capacity increases get absorbed by the delays, as Hapag-Lloyd’s Jansen referenced.

Rooney offered a relatively grim outlook for improvement in the shipping sector.

“I don’t see anything through the middle of next year that’s going to change the forecast of high volumes or what’s associated with that, which is higher rates and a higher probability of congestion,” Rooney said.