How a packaging firm ensured its PET canister’s recyclability 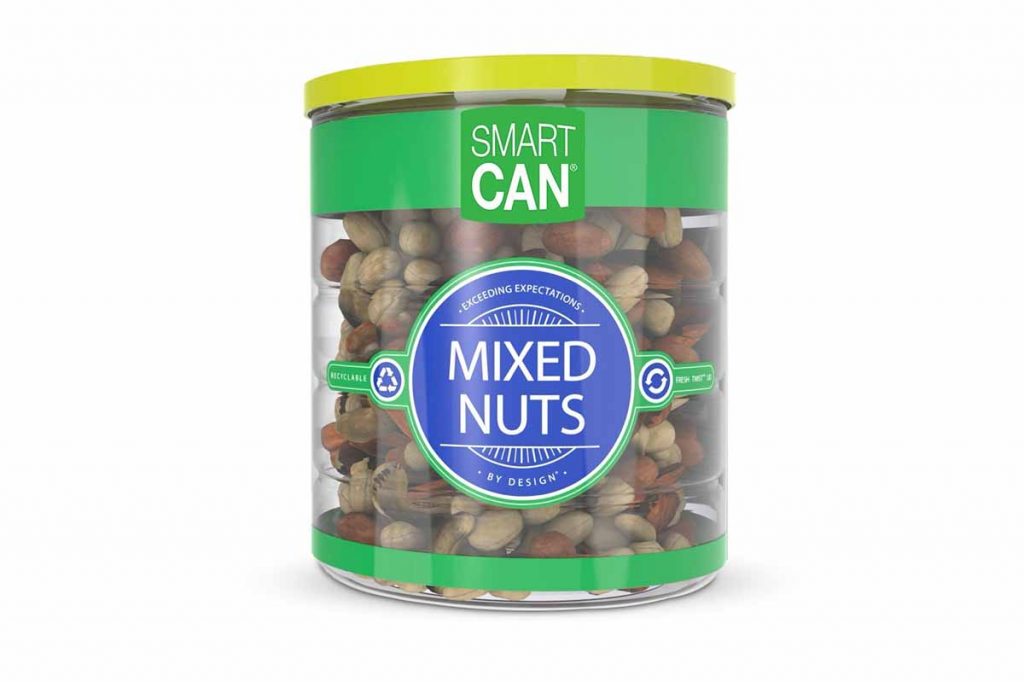 Ring Container Technologies wanted to understand the curbside recyclability of an all-PET container versus its existing polycoated paperboard canister. So it asked recycling programs themselves.

Before rolling out the PET container, which was set to be used to package mixed nuts, Memphis, Tenn.-based Ring Container hired a consultant to compare the PET can’s recyclability with the paperboard-based offering it was already selling into the market.

All indicated they would accept the plastic package, but not the paper-based composite product.

Ring began exploring and developing a PET canister to replace traditional composite can formats early in 2017, VanLoocke said. The first SmartCANs were shipped to nut and dried fruit company John B Sanfilippo and Son in June 2018.

Checking locally before rolling out the package

SmartCAN is 100% PET with an HDPE snap cap and a sealing membrane of either foil or plastic that is removed by consumers, VanLoocke said. The company can use up to 50% RPET in the package. He confirmed no additives are used in the plastic that would degrade RPET quality.

Ring wrote a white paper based on Three Peaks Consultings’ findings. Of the 12 recycling programs contacted by the firm, Seattle was highlighted as an important inclusion because it “is widely recognized as a leader in the recycling community, accepting and processing a wide range of materials,” according to the white paper.

Of those contacted, 10 responded either via email or phone; the consultant checked the websites of the remaining two, Dallas and Philadelphia, to verify the SmartCAN would be accepted.

In addition to communicating with cities to learn about local program materials acceptance, Ring commissioned a study at a large materials recovery facility (MRF), where SmartCANs were tracked to ensure they could be sorted correctly, VanLoocke said.

Ring participates in the Sustainable Packaging Coalitoin’s How2Recycle program, which allows the SmartCAN to have a label indicating it’s “widely recycled.” Ring is also a member of the Association of Plastic Recyclers (APR) and the American Institute for Packaging and the Environment (AMERIPEN).

The consultant’s report went into further depth, noting both the technical difficulty of recycling the paper-based composite package and its low comparative value.

“There is a cost to separate the materials in the composite canister,” according to the white paper. “The resulting pulp is of low value and cannot be used in a similar quality container format due to the degradation of the pulp fibers during processing. Current demand for this material is extremely low, and many MRFs simply do not process this packaging.”

The study also noted the low (and until recently, negative) value of mixed-paper bales in which the composite container would likely be included – if it were sorted correctly and not disposed of as MRF residue. According to RecyclingMarkets.net, mixed-paper bales currently fetch $11 per ton and PET bales are averaging $143 per ton.

When it comes to the plastic option, the white paper stated the cap and the shrink sleeve label are both easily separated from the mono-material PET container, creating a product well-suited to the municipal recycling stream.

“A MRF’s focus,” the white paper noted, “is on high-demand, high-value, highly-recyclable (easily separable and sortable) materials like HDPE and PET.”