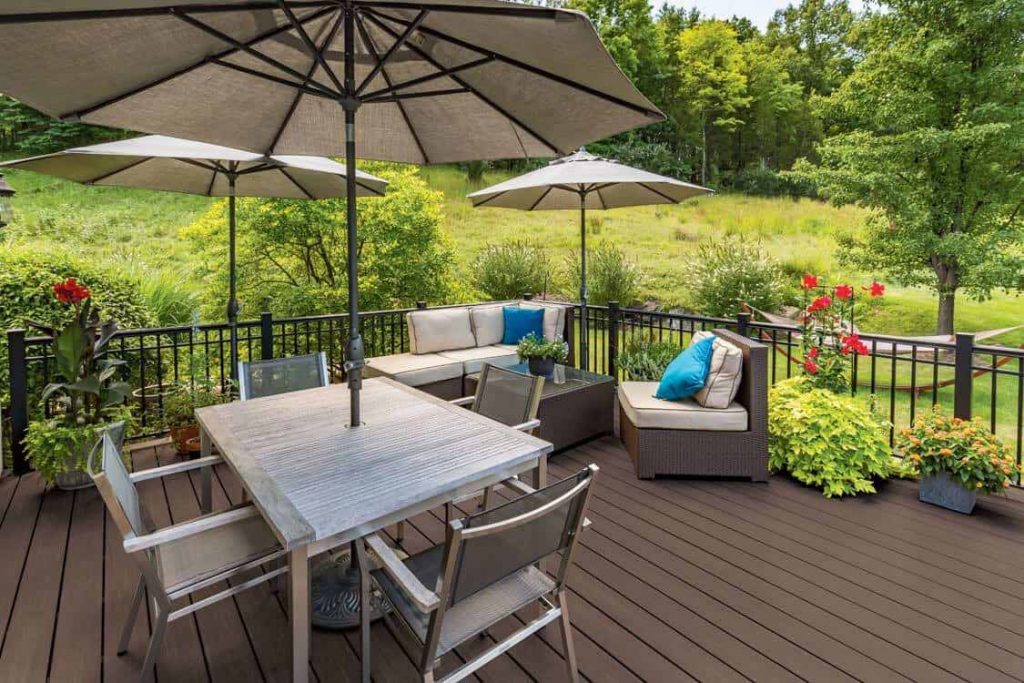 During the 2019 fiscal year, AZEK used over 200 million pounds of recycled plastic and wood in the company’s TimberTech boards. | Image via TimberTech online gallery.

A large manufacturer that uses recovered PE and PVC to make building products has released information about its finances and recycling operations.

Chicago-based AZEK, which makes composite lumber and other outdoor living products, disclosed the information in connection with it becoming a publicly traded corporation. In a June 16 press release, the company said its initial public offering of stock last week raised $817 million for the company.

AZEK makes decking boards with recycled PE and PVC, pavers with recycled rubber and plastic, and sheets used in making outdoor furniture with recycled plastic. It also uses recovered wood in its products. All told, through its recycling program, AZEK diverted 290 million pounds of material from landfills during the 2019 fiscal year.

A June 11 prospectus filed with the U.S. Securities and Exchange Commission (SEC) provides details about the scale and financial impact of the company’s plastics recycling operation, as well as its plans for growth.

The company has two facilities in Scranton, Pa.; two in Wilmington, Ohio; one in Eagan, Minn.; one in Aliquippa, Pa.; and one in Ashland, Ohio.

In April 2019, AZEK announced the opening of a 103,000-square-foot facility in Wilmington, Ohio that processes PE bales into recycled resin for use in TimberTech products.

The previous year, the company spent a total of $42.8 million in property, plant and equipment purchases, the majority of which was spent on equipment for the recycling plant. In 2019, start-up costs for the PE recycling facility were $5.3 million. The plant has a headcount of 57 people.

AZEK, which makes a variety of “outdoor living” products, is also involved in PVC recycling.

The company on Jan. 31, 2020 acquired Ashland, Ohio PVC reclaimer and compounder Return Polymers for about $18 million, using its own cash.

The company uses a substantial amount of recovered plastic in its decking boards, which are branded TimberTech. During the 2019 fiscal year, AZEK used over 200 million pounds of recycled plastic and wood in the boards.

The company expects to boost that amount by 25% during the 2020 fiscal year, according to the prospectus.

AZEK noted it has the opportunity to further increase the recycled content of its boards. The company’s TimberTech PRO and EDGE brand boards are made of about 80% recycled content. AZEK has already boosted its use of recovered plastic in those boards: During the 2019 fiscal year, the company increased the recycled content in the cores of its deck board by 20%, compared with the year before.

Using recycled plastic generates significant money for the company. About 90% of gross sales are of products that were extruded. And, during the 2019 fiscal year, about 44% of all extruded products were made with recycled materials.

The company’s gross margin as a percent of net sales during the 2019 fiscal year was 31.9%. As AZEK stated, and as has been noted by competitors such as Trex, the use of scrap materials yields profit margin benefits.

AZEK said the “flexibility of material input sourcing lowers input costs and reduces reliance on virgin raw materials.” For example, by increasing the percentage of recycled PE in the cores of its TimberTech boards during the 2019 fiscal year, AZEK was able to reduce the amount of virgin HDPE used in them. That change, alone, is saving the company about $9 million a year.

“We are still in the early stages of material substitution across our manufacturing network and realizing the benefits of our investments in recycling, and we expect to drive additional cost savings as we ramp up internal processing of recycled materials used in the manufacturing of our products,” the prospectus states.

The document noted AZEK buys scrap materials through guaranteed supply contracts. Under those contracts, the prices AZEK pays are either set annually based on a discount to the market price, or they are based on the current market price. The company has no fixed-price contracts.

The company also said its supplier base is mostly in the U.S., reducing risks from trade disruptions or supply chain problems caused by the coronavirus.