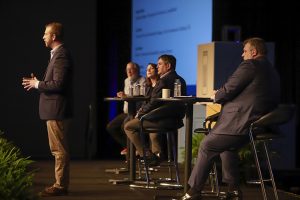 Executives from large resin makers say circular economy principles are key to their companies’ long-term viability. Putting such a strategy into action will be no easy task, however.

“We’re all as an industry trying to define what circular means,” said Patricia Drake, marketing manager polypropylene North America for petrochemical giant LyondellBasell. “We all know we have a large plastics waste problem that’s not going away. That’s heard at the highest level.”

Drake and other petrochemical leaders took to the stage in the opening session of the Plastics Recycling Conference and Trade Show, which is being held this week at the Gaylord National near Washington, D.C.

And the discussion was well-timed. Over the last year, public concern about plastic waste, particularly marine debris, has ramped up considerably in the U.S. and across the world. In concert with that fact, governments of all sizes have taken action to curb use of single-use plastics.

In addition, brand owners have continued pushing higher recycled content goals while also making moves to show their businesses are responding to the wider pollution outcry.

Resin makers say that has all put them in a position where there is no longer any question whether they should be investing in the recycling chain.

“You’ve got to make a product the market wants,” said Jon Timbers, director of innovation and sustainability at styrene manufacturer Americas Styrenics. “You have to meet consumer demand. To include recycled content or not? That’s a non-starter. The consumer is demanding there has to be recycled content in the product and it has to be recyclable.”

Not a straightforward path

But meeting sustainability demands is far from straightforward for plastic resin stakeholders.

Many emerging types of plastic packaging, such as multi-layer flexible films, don’t fit well into the existing recycling infrastructure. And contamination continues to plague streams of recycled plastics that do have proven value.

“We’ve got to have a way to get materials collected; we as an industry do a horrible job of this,” said Jeff Warmann, president and CEO of Monroe Energy, an oil refiner that also operates a plastic-to-fuel operation. “We don’t make it easy for people to do that.”

To handle such complications, some resin players have invested in chemical recycling technologies. Chemical recycling, which brings recovered plastics back down to the monomer level, is in its infancy, but its backers say it holds promise for offering a more circular solution for harder-to-recycle materials.

However, pushing forward in that space will likely require continued investment – and a lot of patience – and it remains unclear how the petrochemical sector will be able to communicate the benefits of the strategy to consumers and other decision-makers.

“Chemical recycling is not viewed as true recycling in the eyes of, let’s say, the [Federal Trade Commission],” said Ted Harris, technical service and sustainability manager at Total Petrochemicals & Refining. “There’s some work that needs to be done to ensure that monomers created through this process and back into packaging does count as recycled content.”

Another factor is the confusion that often gets created when different product and packaging manufacturers cherry-pick data from research to back up their sustainability claims.

“We create a mess in the market and the consumer’s mind when we give them these conflicting studies in environmental impact,” said Timbers of Americas Styrenics.

Nevertheless, it’s clear that resin companies are not being shy about putting their resources behind technologies and companies that hold hope in the sustainable packaging space.

Large plastics stakeholders also announced in January they are putting up to $1.5 billion behind a new initiative called the Alliance to End Plastic Waste.

Underneath all the action is the simmering threat that some plastic products will be eschewed by society in general.

LyondellBasell’s Drake said that while her company is certainly keeping an eye on recent moves by governments to ban some single-use plastics, the resin maker’s major focus is on finding pathways to producing the packaging that the market is asking for.

“It’s innovate or die,” Drake said. “We’re looking for what our product is best suited for, rather than trying to hold on to what may be a sunsetting application.”