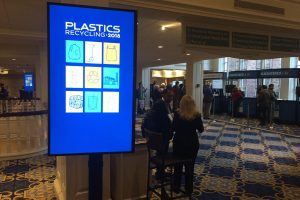 The 13th annual Plastics Recycling Conference, taking place this week in Tennessee, has brought together nearly 2,000 sector executives. That record-high number is a sign of the widespread industry thirst for connection and guidance at a time of unprecedented market disruption.

Indeed, China’s recent action to restrict recyclables imports will be a key talking point throughout the three-day Plastics Recycling 2018 event, which kicked off yesterday at the Gaylord Opryland Resort & Convention Center.

The event has drawn over 1,900 attendees from 35 countries. The attendee number is up from last year’s tally of around 1,700, which was the previous high for the conference.

The opening plenary session today features three analysts from IHS Markit who will discuss the realities of markets both in China and elsewhere around the globe. Another morning session will feature major exporters, including Waste Management, and the discussion is expected to focus on how companies are shifting their strategies and searching for fresh opportunities to profitably move recovered plastics.

Meanwhile, another panel today has been organized by the China Scrap Plastics Association and will delve into the ways Chinese plastics recycling entities are pushing forward plans to invest in the U.S. and elsewhere to reshape processing pipelines in the wake of China’s import policies.

And the market fluctuation theme at the conference is extending beyond the sessions that directly address the topic. The conference exhibit hall, featuring 200 companies and associations, opened yesterday afternoon, and many vendors were talking up technologies and partnerships to help stakeholders overcome today’s downstream challenges.

The conference also has around 180 companies and organizations acting as sponsors.

Furthermore, sessions organized by groups including the American Chemistry Council, the Association of Plastic Recyclers and the Institute of Scrap Recycling Industries all have a focus on boosting domestic demand for scrap plastics in different ways.

“In light of the latest Chinese ban on plastics, there is an even bigger need for domestic avenues for low-value plastics such as Nos. 3-7 plastics,” Priyanka Bakaya, the founder and CEO of plastics-to-fuel enterprise Renewlogy, recently told Plastics Recycling Update in a preview to her speaking engagement, which will take place at the conference this afternoon. “There is also a growing awareness of marine plastic pollution, which is another interesting application of plastic to fuel.”

This year marks the first time the Plastics Recycling Conference has come to Nashville, Tennessee’s music-filled capital. It’s a fitting location, given the concentration of plastics recycling enterprises based in the Southeast. A number of conference attendees yesterday toured the manufacturing sites of MSS, Inc. and NRT, both of which are providers of plastics recycling sortation equipment.

The sounds of Music City will permeate the conference’s reception tonight, with dozens of musicians scheduled to “busk” in the aisles of the exhibit hall as attendees talk business around them.

Perhaps that local country and blues can serve as inspiration for the industry executives gathered here. With China’s policies rapidly rewriting the economics of plastics recycling, many companies are trying their best to sing a new tune. The question now is how well all these voices will harmonize.

The conference wraps up tomorrow. Look for more coverage of the perspectives shared at the event in Plastics Recycling Update in the coming weeks.