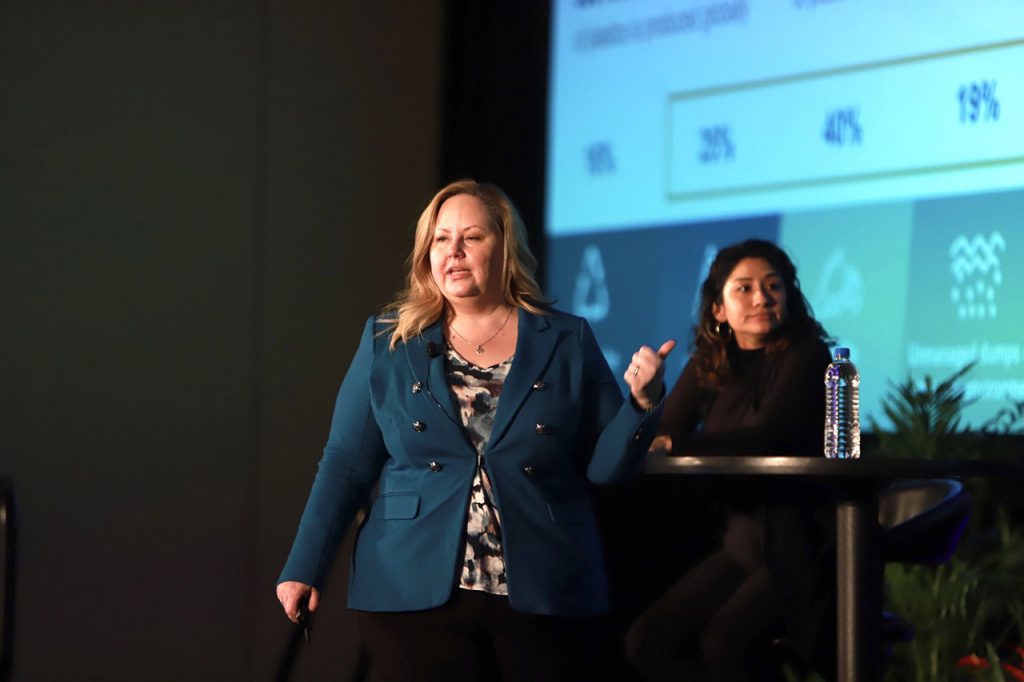 Last year, e-scrap processor RecycleForce announced it would send e-plastics to Brightmark Energy for conversion into fuel, oil and wax products. Brightmark was one of several companies that participated in a recent workshop about technologies broadly known as “chemical recycling.”

As opposed to mechanical recycling, which typically involves shredding, cleaning, melting and extruding plastics, chemical recycling involves a number of additional processes employing solvents, heat and/or pressure. The technologies can remove colorants and other contaminants from polymers or convert them into other chemical products.

The workshop, which took place at last week’s Plastics Recycling Conference and Trade Show in Nashville, Tenn., focused on these chemical recycling technologies, often called “advanced recycling.” The conversation made clear that many of the issues affecting chemical recycling companies are also faced by the recycling industry in general: the importance of securing appropriate feedstocks, establishing sustainable partnerships, and clearly communicating recycled content to consumers.

Below are a few major takeaways from the session, which was presented by the American Chemistry Council, the Association of Plastic Recyclers and Closed Loop Partners. The Plastics Recycling Conference and Trade Show is produced by Resource Recycling, Inc., publisher of E-Scrap News.

Holli Alexander, strategic initiatives manager for global sustainability at Eastman Chemical, discussed the issue in relation to two of her company’s processes: a conversion technique for mixed-plastic scrap and a depolymerization venture for polyester scrap. Conversion refers to producing a different chemical product from plastics, and depolymerization involves breaking polymers down into their building blocks, which can be used to make new plastic.

Collection can be a paradox, Alexander said, because if there’s a plastic that’s being collected for mechanical recycling, then mechanical recycling is probably where that material should go anyway. But in looking at new streams that aren’t being broadly collected today – such as carpet, textiles or flexible packaging – the collection and logistics economics are unknown. That being said, Eastman is sourcing recovered PET from California carpet recycling company Circular Polymers to feed into Eastman’s methanolysis process, a depolymerization technology.

“The bottom line is the biggest thing we know is that the economics are going to be confusing. It’s going to be challenging,” she said. “But, truthfully, it’s going to take all of us collaborating to be able to make sure that we can come up with something that is impactful and actually creates a good solution.”

Domenic Di Mondo, vice president of technology and business development at GreenMantra Technologies, noted his company can partner with existing waste management companies to purchase plastics that may be undervalued because they aren’t suitable for mechanical recycling. That’s because GreenMantra’s catalytic selective depolymerization technology is insensitive to traditional quality requirements of melt flow, mixed colors, debris and moisture, he noted.

Bill Cooper, vice president of Agilyx, said that the traditional process of sorting, separating and cleaning recovered plastics doesn’t work for his company, which uses a pyrolysis technology to produce a number of products from different polymers. “For us, there’s too much cost there, and you end up with feedstock that’s too expensive,” he said.

Agilyx already uses its technology on polyethylene and polystyrene. It’s working to apply the process to poly(methyl methacrylate), which is also known as acrylic or plexiglass and is often used for screens in electronics.

The company has developed an integrated feedstock management system that understands what’s in the stream from a chemical standpoint, he said. It’s key to helping Agilyx process different materials into products meeting various specifications. Last year, the company partnered with GE to apply artificial intelligence to improve its systems.

“We’re rolling our feedstock management system out nationally as we speak. It hasn’t been formally announced. And we’re supporting not only our technologies but third-party technologies as well,” Cooper said. 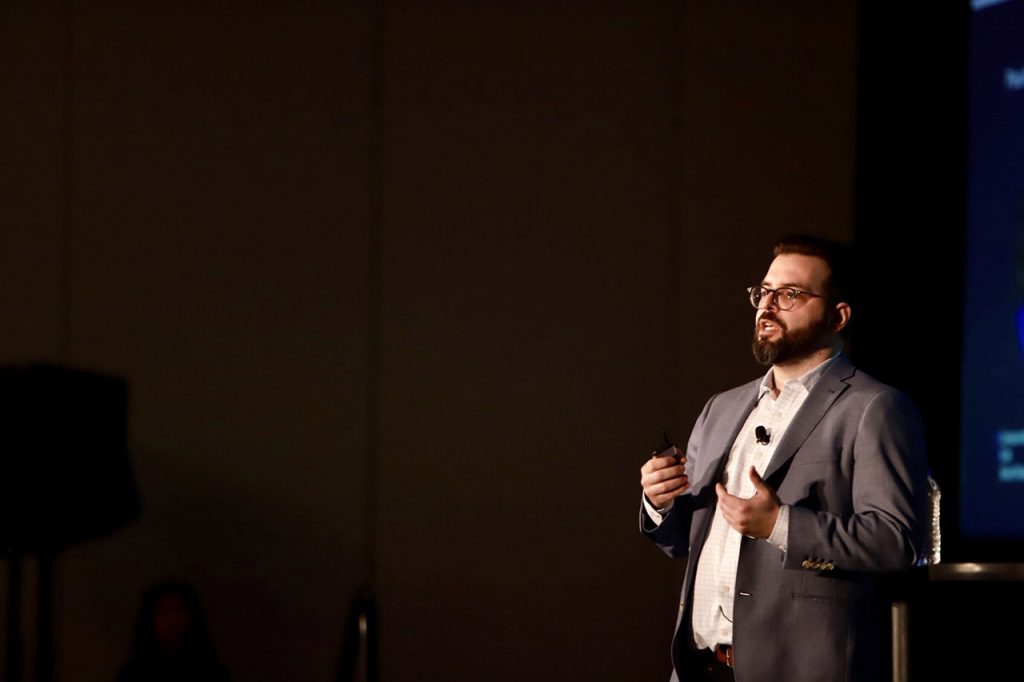 Other speakers hammered home the point that partnerships are key to success in the quickly evolving chemical recycling market.

Brightmark Energy uses a pyrolysis process to convert mixed plastics into fuel, oil and wax products. Its first facility, in Ashley, Ind., is set to open later this year. Bob Powell, CEO of Brightmark Energy, emphasized the importance of long-term, sustainable collaborations with material suppliers and others.

“We’re looking for relationships that are not transactional, per se, but are repeat partnerships,” he said.

Important considerations are whether the partners can grow alongside each other, whether their broader goals and values are aligned, and whether the deal is economically viable for both parties, he noted.

He emphasized the partnership with nonprofit e-scrap processor RecycleForce, which helps formerly incarcerated people reintegrate into society while teaching them new skills. He urged companies to look for partners that are impactful, such as RecycleForce, which is based in Indianapolis.

“Those are partners that we love, partners who are doing really cool things and can also transactionally work with us,” Powell said.

Lauren Versagli, who oversees corporate development for London-headquartered pyrolysis company Plastic Energy, said her company finds that its first role in a partnership is to inform the discussion on what chemical recycling is, what it’s not, how it fits in and how it can advance the circular economy.

She also noted the importance of brand owners to creating demand pull through the whole value chain. She cited a collaboration in Europe that led to food packaging with recycled content. In that project, waste management company Renewi supplied the scrap plastic, Plastic Energy converted it into oil with its pyrolysis technology, SABIC processed the oil into new plastic, and Unilever created the final product.

Also important is to discuss what each stakeholder will invest at different points and how to maximize the value, Versagli said.

And, although it may seem obvious to do, ensuring there’s strategic alignment often gets lost in the excitement of taking action, she said. Senior-level endorsement is critical, she said, as is ensuring different businesses units in a company are all on the same page.

Connecting with the consumer

When it comes to resin made from chemically recycled plastic, communicating recycled content details to a consumer may be trickier than it first appears.

That was a point made by Helmut Brenner, sustainability manager at Shell Chemicals in the Americas. Last year, his company announced its ambition to feed 1 million metric tons of scrap plastic per year into the company’s global chemical production infrastructure. But because scrap and virgin feedstocks are mixed together in production units, calculating recycled-content becomes a stickier question.

Mass balance accounting, a technique used to calculate recycled content, addresses technical issues with gathering and analyzing the data, he said. And third-party accreditation is important if you want a credible, auditable framework, he said.

Brenner said mass balance accounting is already used in a number of industries – palm oil, bio-fuels and others – so it’s not a matter of the plastics industry learning a new methodology.

“The main issue, as I see it, is that of communication,” Brenner said. “Being able to communicate this principle, this idea, in a way that’s easily understood, that people can grasp onto as clearly as they can with mechanical recycling and understand, ‘Yes, I understand where those molecules come from, or I appreciate where the origins of that material or product comes from.’ This is the real driving factor.”

A version of this story appeared in Plastics Recycling Update on February 26.