With revenues soaring, WM and others invest in processing 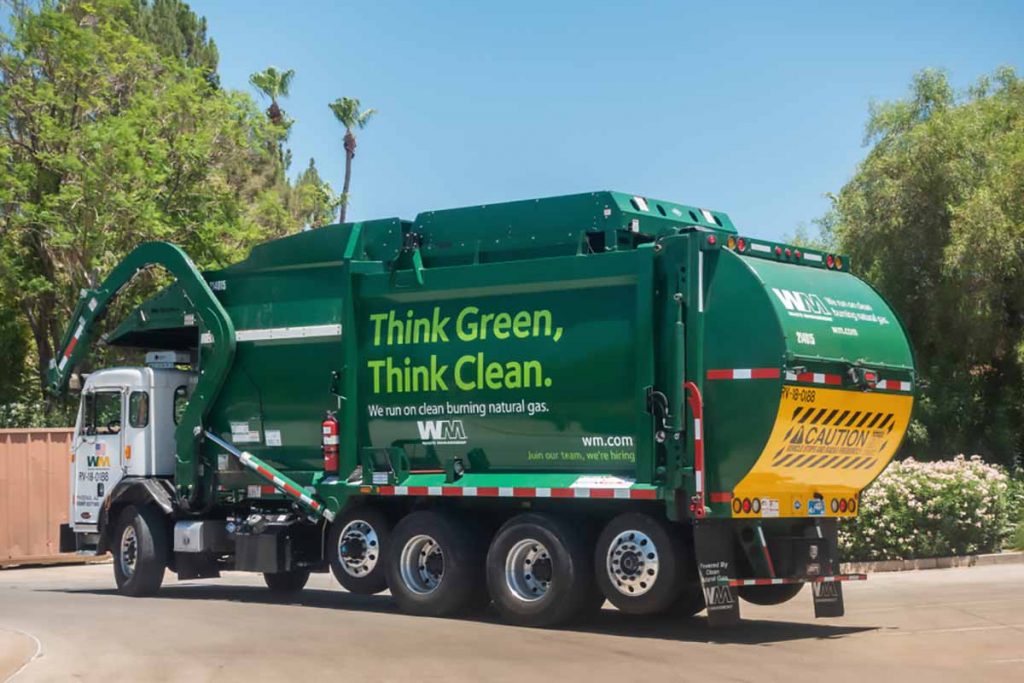 Waste Management announced plans for another $200 million in recycling investments for 2022. | BCFC/Shutterstock

Driven by labor market difficulties, Waste Management is accelerating its plans to upgrade MRFs so they can operate more profitably and with a smaller headcount, the company’s CEO said.

“Given the success of these rebuilds and the labor inflation challenges of late, we have accelerated the retooling of the remaining single-stream plants and expect to address 90% of single-stream volume by the 2023-2024 timeframe,” Fish said during an Oct. 26 conference call with investors. Those MRF-upgrade investments are expected to total $200 million in 2022 alone, the company announced on Nov. 15.

Meanwhile, all five of the largest garbage and recycling haulers in North America reported substantial year-over-year recycling revenue boosts during the third quarter, with Waste Management, Republic Services, GFL Environmental, Casella Waste Systems and Waste Connections reporting increases of 60%, 60%, 34%, 28% and 161%, respectively. The summer months provided a continuation of what those companies experienced during the spring.

The following are third-quarter 2021 recycling business results for the five companies:

The company’s recycling business brought in $464 million in revenue, up 60% from the prior-year period.

The huge increase was because of skyrocketing recovered material values. Average market prices for commodities at Waste Management MRFs were up 160% from a year earlier, according to the company’s quarterly report.

According to a Waste Management (WM) press release, the recycling business was also much more profitable during the third quarter. The segment’s earnings before interest, taxes, depreciation and amortization (EBITDA) increased by $53 million year over year.

“The improvement was driven by an increase in market prices for recycled commodities and investments the Company is making in improved technology and equipment at its materials recovery facilities that are delivering a less labor-intensive operating cost model,” the release states.

During the Oct. 26 call with investors, Fish noted that the equipment investments at WM’s “next-generation” MRFs has allowed them to operate with 35% fewer employees. Fish estimated that pencils out to about $1 million per MRF per month in labor savings.

Four MRFs have been “fully automated” at this point, he said, according to a call transcript from Seeking Alpha. Lower costs at upgraded facilities helped WM achieve the highest profit margins ever in its recycling business during the third quarter, he said.

The company’s Nov. 15 press release indicated those advanced MRFs are in Chicago; Salt Lake City; Raleigh, N.C.; and Sun Valley, Calif. They include technologies such as robotics, intelligent sorting, volumetric scanners, and cameras on collection vehicles to further reduce contamination. The company also offered details on these facilities in its recent sustainability report.

WM still has around 40 MRFs to upgrade, Fish said during the call, acknowledging that the company is automating the largest ones first, so many of the remaining ones are smaller and wouldn’t yield as significant of labor saving. According to the release, WM is fully renovating facilities in Houston; Cleveland; Woodinville, Wash.; and Elkridge, Md., and another 29 MRFs have been or are being outfitted with enhanced sorting technologies. By 2023, WM plans to have outfitted 95% of its residential MRFs with upgraded sorting equipment, the release states.

In terms of investment costs, Devina Rankin, WM’s chief financial officer, noted during the call that WM expects to spend about $200 million this year on recycling technology and equipment. Overall company capital spending in 2021 is coming in lower than originally expected, however, because of supply chain constraints.

And for 2022, the release noted, WM plans another $200 million in recycling investments. That would bring its total investment in MRFs to $700 million since 2018, the year China’s National Sword campaign first started upending global recycling markets.

In the release, Tara Hemmer, WM’s senior vice president and chief sustainability officer, noted the company is respondent to consumer-packaged goods companies’ 2025 and 2030 goals for recycled content, particularly for plastics.

“We are making great progress unlocking this supply, increasing overall recycled plastic volume by 25 percent since 2019 and this will continue to expand,” she stated. “These enhancements will ensure recyclables are efficiently sorted and sold to high-quality end markets, meeting the strong demand for recycled content material in new products.”

Recycling now brings in 10% of Waste Management’s total operating revenue. Overall, Waste Management brought in $4.67 billion in revenue during the third quarter, up 21% year over year.

The company’s recycling business brought in $119.9 million in revenue, up 60% year over year.

Republic’s quarterly report noted that the average price of recovered commodities (excluding glass and organics) was $230. That was up from $99 during the third quarter of 2020. It was also up from $170 a ton during the second quarter of this year, according to a company press release.

The following is a look at key third-quarter 2021 recycling numbers from five of the largest publicly traded haulers in North America:

“Those are tough jobs. Those are higher turnover jobs,” he said, according to a call transcript provided by The Motley Fool. “And so it allows us to reduce the labor forces incrementally in those facilities, but then also produce a better product with more state-of-the-art equipment.”

Recycling now makes up 4% of Republic’s total operating revenue. Overall, the company brought in $2.93 billion in revenue during the third quarter, up 14% year over year.

The Canadian company’s recycling business brought in 98.7 million Canadian dollars (about $79 million U.S.; all dollar figures below are in U.S. currency and were converted on Nov. 10). That was up 34% from the same period in 2020, according to GFL’s quarterly report.

“Materials recovery” is part of GFL’s solid waste division, which also includes garbage collection and landfilling. Overall, the solid waste division’s revenue was up 8.2% organically (excluding the impact of acquisitions) year over year, according to a GFL presentation. Of that 8.2%, higher commodity prices contributed 1.5 percentage points.

During a Nov. 4 conference call with investors, Patrick Dovigi, GFL’s CEO, said the company is probably looking to build four or five new recycling facilities over the next year and a half. He pointed to opportunities to build MRFs to complement existing GFL operations in the southeastern U.S., the Midwest (Michigan was mentioned, specifically) and Ontario, according to a call transcript provided by The Motley Fool.

Materials recovery now makes up nearly 7% of GFL’s total operating revenue. Overall, GFL reported $1.19 billion in total revenue during the third quarter, up 43% year over year. Most of the revenue growth was because GFL acquired other companies since the third quarter of 2020, however. GFL on Oct. 30, 2020 acquired U.S. garbage and recycling operations as part of Waste Management’s acquisition of Advanced Disposal Services. Earlier that month, GFL had acquired WCA Waste Corporation.

The Resource Solutions division includes larger-scale recycling and commodity brokerage operations, organics services, and large-scale commercial and industrial services. Starting this year, Casella no longer details its recycling results separate from the others.

The Resource Solutions division enjoyed an operating income of $6.7 million, up from $2.2 million during the third quarter of 2020, or up 203%.

During an Oct. 29 conference call with investors, Ned Coletta, the company’s chief financial officer, said the average commodity price was up by $113 per ton year over year, driven by higher OCC, mixed paper, metals and plastics pricing.

In recent years, Casella and other haulers have negotiated contracts that charge fees to local governments when average commodity prices fall and share commodity sales revenues when prices rise over certain thresholds. The contract structure reduces commodity market risk for the hauler. In the call, Coletta said that the thresholds were exceeded in the third quarter for the first time in many years, according to a transcript from The Motley Fool.

“We’ve created a balanced business model that is economically and environmentally sustainable,” company CEO John Casella said on the call. “As recycling commodity prices have increased, we’ve been able to share in the upside with our customers through lower tipping fees, a lower [sustainability recycling adjustment] fee and in the case of some materials, a higher rebate.”

The Resource Solutions division now brings in 26% of Casella’s operating revenue. Overall, the company reported total revenue of $242 million during the third quarter, up 19% year over year.

The company’s recycling business reported $55.8 million in revenue, up 161% year over year.

According to Waste Connections’ quarterly report, revenue from recovered commodity sales increased by $28.3 million year over year, primarily because of higher prices for OCC, aluminum and other fiber products, greater volumes collected from residential customers, and a partial recovery of commercial recycling volumes.

According to an Oct. 29 conference call with investors, Worthing Jackman, Waste Connections’ CEO, said OCC prices averaged $186 per ton, up 150% year over year.

“At the plant level, we are investing in additional optical sorters and robotics to manage headcounts at MRFs, increase productivity and improve the quality and value of recycled commodities through reduced contamination rates,” according to the sustainability report.

Recycling now makes up 3.5% of Waste Connections’ operating revenue. Overall, the company brought in $1.6 billion in revenue during the third quarter, up 15% year over year.