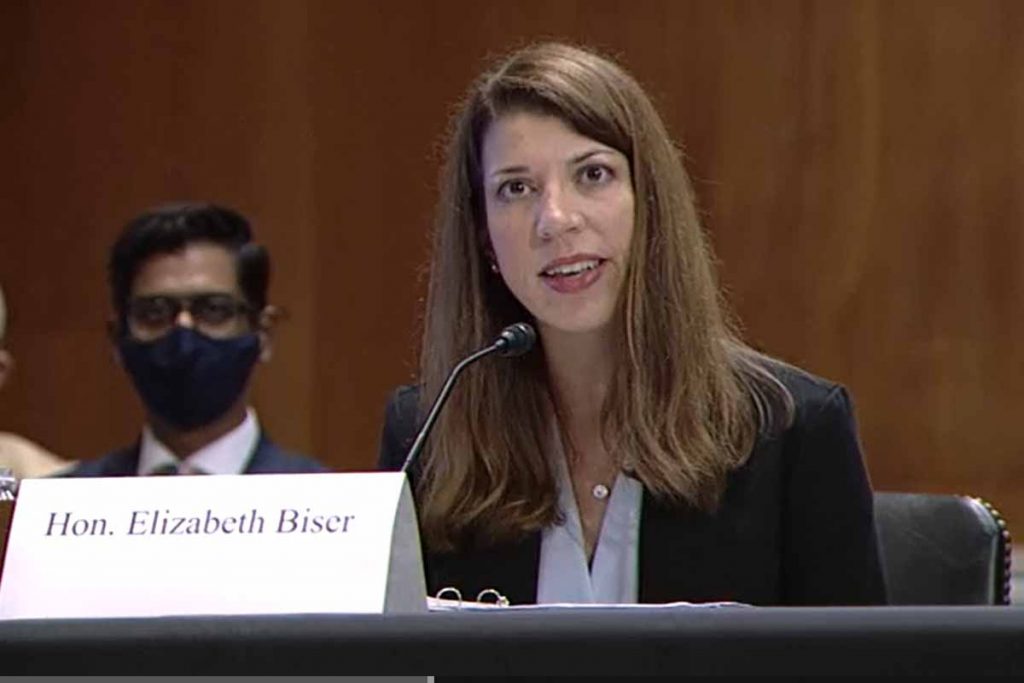 Elizabeth Biser of the North Carolina Department of Environmental Quality described the importance of strong state support for materials recovery during a hearing last week.

Legislators on the Senate Committee on Environment and Public Works convened the hearing in light of the high-profile challenges facing recycling over the past few years and the growing focus on creating a “circular economy” for the future.

“The issues with China taking – or more recently, not taking – our recycling materials and the issues with supply lines laid bare by the pandemic made clear we need to do more of the material processing and manufacturing right here in America,” said Sen. Shelley Capito, R-W.Va., the ranking member on the committee.

The hearing, titled “The Circular Economy as a Concept for Creating a More Sustainable Future,” was led by Capito and Sen. Tom Carper, D-Del., both members of the Senate Recycling Caucus.

Capito described how some municipalities have elected to store recyclables during periods of market strife until conditions improve.

“This is all due to a lack of domestic demand for our recycled materials,” Capito said. “Market demand for these materials can create the incentives to invest in the recycling system and expand access to recycling across the country, especially in rural areas like my state of West Virginia.”

Billy Johnson, chief lobbyist for the Institute of Scrap Recycling Industries (ISRI), echoed the need to focus on market demand.

“If there is no end market to utilize recyclable materials that are collected, they will not be recycled and used again in manufacturing, regardless of the volume of material collected,” Johnson said. “Collection without market consumption is just not recycling.”

But he added that demand is one of four “major pressure points in the current residential recycling infrastructure.” The others include public education, well-crafted contracts between MRFs and municipalities, and processing facility investments.

Elizabeth Biser, secretary of the North Carolina Department of Environmental Quality, described how strong government support for recycling can help in all of those areas. North Carolina has a particularly robust state recycling office that supports the sector in numerous ways.

Biser laid out some of the factors that helped North Carolina develop strong state support for recycling. She pointed to a disposal surcharge that generated funding for recycling infrastructure grants, landfill bans on readily recyclable materials, and a concerted effort to bring end users to the state and strengthen market demand.

Roberta Elias, director of policy and government affairs at the World Wildlife Fund (WWF), told lawmakers the current framework of thousands of different recycling systems creates too much uncertainty for industry stakeholders.

WWF has been engaged in many recycling industry collaborative projects in recent years, including co-leading the U.S. Plastics Pact and a project to track corporate sustainability commitments and progress toward those goals.

“The number one thing we have heard in conversations with industry is they want clear and consistent rules of the road,” Elias said. “They also want assurances that there will be sufficient high-quality recycled content to deliver on promises already made to consumers.”

She described the projected growth in plastic production in the decades to come, estimating that current infrastructure won’t be able to keep up.

“The current recycling system, which is, again, disjointed across 20,000 municipalities, functions without clear goalposts at an economic disadvantage to landfills,” Elias said. “It simply cannot process the sheer volume of stuff.”

Elias described the Break Free From Plastic Pollution Act as the “high-water mark” for a well-crafted extended producer responsibility (EPR) program, and she noted that industry groups including the American Beverage Association support the EPR component of the act.

The wide-reaching federal bill also includes a national container deposit, temporary ban on chemical recycling facility development, limits on scrap plastic exports and more. It was introduced in 2020 and re-introduced this year. It has not received a Senate committee hearing.

Biser highlighted one piece of federal legislation that has advanced: the RECYCLE Act. It was first introduced in 2019 and was recently written into the federal infrastructure package lawmakers are considering. The RECYCLE Act creates grants for recycling projects, and Biser tied it to the ability of local governments to implement outreach projects, among other efforts.

“That is an important source of funding for states like mine to carry that message to our residents, who, poll after poll shows, are confused about how to recycle right,” she said, citing cart-tagging as one effective program these grants can facilitate.

Technology can expand the pool of available materials

Brian Hawkinson, executive director of recovered fiber for the American Forest & Paper Association (AF&PA), focused on the potential for technology advancements to recover a greater amount of recyclables that are currently going to waste.

Hawkinson shared details about the Juno project being carried out by Georgia-Pacific in Oregon. Through that initiative, the company is processing highly contaminated waste paper from foodservice settings, and it is recovering the fiber for use in new products.

Currently, the fiber recovered through this process in Oregon is going into corrugated boxes produced at the company’s Toledo, Ore. containerboard mill, Hawkinson said.

Hawkinson offered the technology as an example of something that does not draw away from current recovery efforts – the Juno process is bringing in fiber that would otherwise be disposed of – and has the potential to expand the number of sources from which mills can recover fiber.