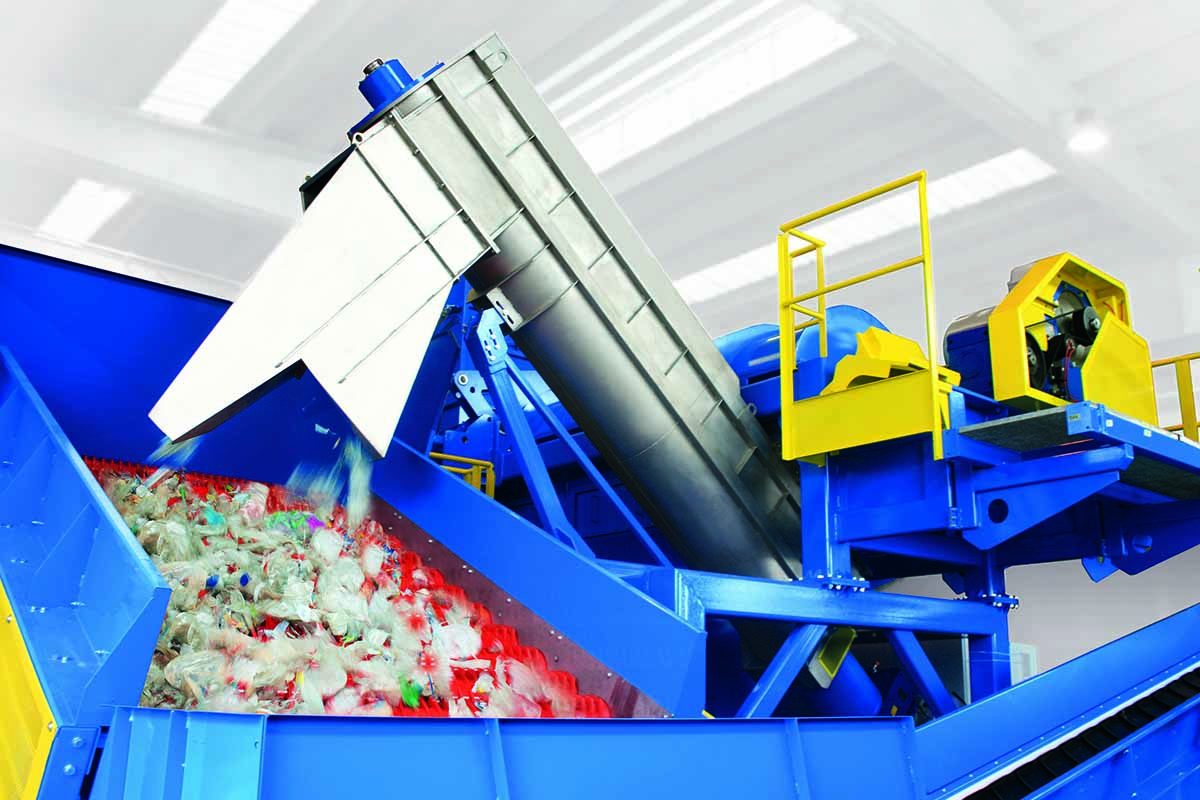 Indorama Ventures Sustainable Solutions will install AMUT equipment at its Alabama PET recycling facility, including bottle de-labeling equipment like the unit pictured above. | Courtesy of AMUT

Indorama Ventures Sustainable Solutions is spending significantly to more than double the size and flake-production capacity of its Alabama PET recycling plant, according to interviews and city documents.

Crews are in the midst of assembling a new AMUT brand wash line at the expanded Athens, Ala. facility, which was known as Custom Polymers PET before Indorama purchased it in January 2019. The project will boost the plant’s annual food-grade PET flake capacity from 65 million pounds to 155 million pounds, or an addition of 90 million pounds, Byron Geiger, chief operating officer for Indorama Ventures Sustainable Solutions, told Resource Recycling.

Athens, Ala. city documents indicate the total project cost is expected to be $51.5 million.

“We see PET as the most recyclable plastic that’s out there,” he said, “and we want to make sure that the capacity is there to support the demand of our customers.”

The world’s largest virgin PET manufacturer, Indorama has been expanding its recycling footprint and produced 155,586 metric tons of recycled PET (RPET) flake in 2020, according to the company’s sustainability report. Its total plastic, chemicals and fiber production was 13.72 million tons.

For at least the past two years, the Bangkok-headquartered company has touted its plans to invest substantial sums into expanding its recycling capabilities. Two weeks ago, Indorama submitted the high bid of $63.9 million to acquire a Dallas PET recycling plant owned by processor CarbonLite, which filed for bankruptcy in March.

The expansion in Athens is a large project.

In November 2019, the Athens City Council first approved for Indorama a 10-year state and local property tax break and payment of up to $25,000 for the expansion and hiring of an additional 60 full-time employees. At the time, Indorama’s estimated capital investment was $40.4 million. In October 2020, the Council amended the agreement based on expanded project plans, which called for a total capital investment of $51.5 million.

Geiger told Resource Recycling Indorama’s expansion in Athens has been on the drawing board since Indorama first purchased the facility. Kicked off in spring 2020, the project added 110,000 square feet to the 100,000-square-foot facility, he said. More bale storage space was added outside the building as well.

Anthony Georges, North American president for Italy-based equipment provider AMUT, said the new wash line will have a larger capacity than the facility’s existing setup, which AMUT provided over a decade ago.

Designed to handle greater amounts of contamination, the new line will include dry and wet de-labelers, said Georges, who noted that the use of shrink sleeve labels has grown considerably since the original wash line was installed. PET bale quality has degraded over the years, with many materials recovery facilities (MRFs) relying on equipment designed to sort the packaging stream of the past, not today’s curbside mix, he said.

Geiger estimated that today’s curbside PET bales yield only about 50-55% clear PET (his plant can also recycle clear PET thermoforms alongside bottles, as long as the percentage isn’t too high). The new line will be designed to recycle a very challenging curbside stream into a high-quality product, which will mostly go into food and drink packaging, Geiger said.

In addition to the AMUT wet and dry de-labelers, the new line will include whole bottle sorters, a wet grinder, turbo washers, friction washers, float-sink tanks, a high-speed centrifuge, and dryers, Georges said.

He emphasized the water efficiency of the system, which uses about 1 pint of fresh water to produce 1 pound of RPET flakes, saving water and reducing energy and chemical costs. Fresh water is introduced at the final flake-rinsing stage, and then the same water is filtered and reused counter-current through the system, ending up in the first wet de-labeler, where it’s used to clean dirty bottles.

The machinery has been moved into the new space, and crews are assembling it, Georges said. Geiger said the line is scheduled to start up in the third quarter of this year.

With the expansion, Indorama Ventures plans to hire an additional 60 to 70 people, Geiger said.

In addition to its flake production capabilities, the Athens facility can produce 27 million pounds of RPET pellet a year. Company officials are also looking at a separate project that would boost pelletizing capacity, Geiger said. The latest 110,000-square-foot addition would provide room for additional extrusion equipment too.

A version of this story appeared in Plastics Recycling Update on June 3.