The details on a MRF contract built for the current age 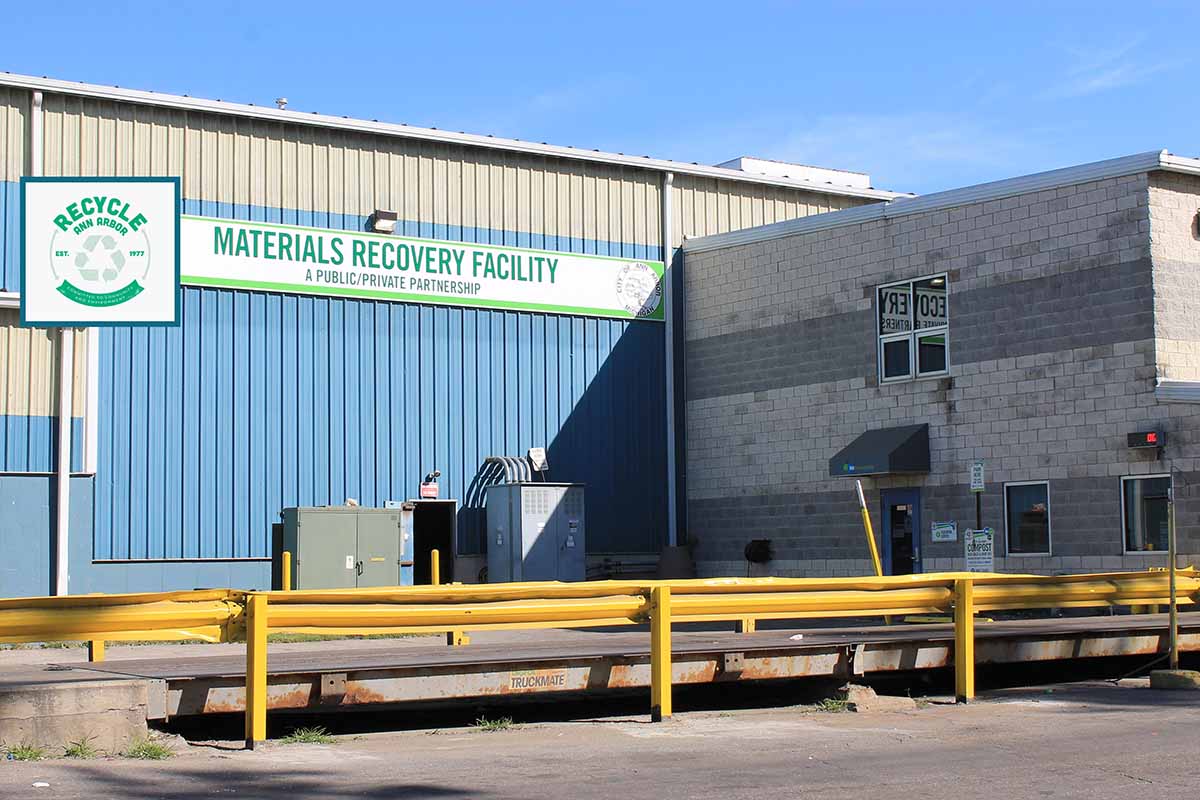 Recycle Ann Arbor secured $6 million in financing to essentially rebuild the MRF, which was first constructed as a dual-stream facility in 1995 and was retrofitted for single-stream sorting in 2009. | Courtesy of Recycle Ann Arbor.

Economic uncertainty is a given in recycling right now, but Recycle Ann Arbor has two points of stability beneath the facility project it’s pushing forward: Processing costs are covered, and fiber bales have a guaranteed home.

Bryan Weinert, director of strategy for the nonprofit group Recycle Ann Arbor (RAA), recently spoke with Resource Recycling about a new contract between the organization and the city of Ann Arbor, Mich.

On July 20, the Ann Arbor City Council unanimously voted to approve a 10-year MRF services agreement with RAA, with the potential for two three-year extensions. Under the deal, RAA is leading a $6 million overhaul of the city-owned MRF so it can begin sorting and selling bales again.

Although RAA operated the city’s fairly low-tech recyclables sorting facility from 1978 to 1994 – and it currently runs a C&D debris recovery facility – this will be the first time RAA has run a MRF with this scale and capabilities.

Weinert said the group is confident it can tackle the challenges. It has staff members with MRF experience, including its CEO Bryan Ukena, who was previously co-president of Minnesota-based Eureka Recycling.

The group is also receiving support from Rumpke Waste and Recycling; Quebec-based recycling equipment supplier Machinex; consulting and research firm Resource Recycling Systems (RRS), which is based in Ann Arbor; the Association of Mission-Based Recyclers, of which RAA is a member; and others.

“We’re feeling pretty good that we’ve got a lot of friends and a lot of connections,” he said. “And then we’ve just got a lot of internal background and experience that we’ll bring to this table as well.”

It’s been years since the single-stream MRF sorted and marketed recyclables from the college town of Ann Arbor, located about 45 minutes west of Detroit.

The 40,000-square-foot city-owned facility used to be run by ReCommunity, but the city in July 2016 terminated the contract with ReCommunity, tipping off a legal battle. In August 2017, Republic Services acquired ReCommunity, and in October the parties settled the lawsuit.

In the meantime, Waste Management (MW), under a contract with the city, used the facility to transfer recyclables to a WM MRF in Akron, Ohio. That lasted for one year, and then the city put a three-year contract out for bid. RAA won and has been using the site to transfer curbside recyclables to a Rumpke MRF in Cincinnati for the past three years.

RAA and the city signed the deal amid unprecedented market and economic turmoil.

Two years ago, China’s National Sword campaign upended the international movement of recyclables. Although the country remains a huge consumer of OCC from the U.S., China appears set to prohibit all scrap imports as of 2021. Add to those concerns the coronavirus pandemic economic impacts and political uncertainty in the U.S.

But RAA’s new contract is crafted to provide some measure of financial certainty. City documents show Ann Arbor will cover RAA costs of processing city recyclables tipped at the MRF. For fiscal year 2022, the costs are estimated at $152 per ton, or about $2.2 million total. The processing cost will change in subsequent years based on the consumer price index and number of city tons delivered to the MRF. Additionally, the processing fees take into account depreciation over 10 years of RAA’s millions of dollars in equipment purchases.

If markets improve and revenue exceeds the processing fee, then the city will receive 55% of the amount over the fee and RAA will get 45%. Additionally, the city will get a host fee of $13.50 per ton when third parties tip material at the MRF.

Weinert said the contract was negotiated such that RAA is being paid the full cost of processing, and the city has certainty about the dollar amount it would have to spend under the absolute worst-case scenario: zero dollars in commodity sales revenue. Additionally, the city gets to benefit from improvements in market conditions.

Additionally, RAA was able to find some end-market certainty. The group negotiated a 10-year pricing agreement with Pratt Recycling to take the MRFs fiber output, he said. Fiber makes up about two-thirds of the weight handled, he noted. Pratt was partially motivated to sign the deal to feed the company’s new 100% recycled containerboard mill in Wapakoneta, Ohio, Weinert noted. Opened last year, the plant will take OCC and mixed paper from MRFs.

RAA also has plans in place for recovered glass, which makes up about 15% of the weight handled, he said.

Currently, Rumpke is sorting and cleaning up the glass stream at its beneficiation facility in Dayton, Ohio. Once the rebuilt Ann Arbor MRF is up and running, RAA will continue to send the glass fraction to Rumpke in Dayton so it can be recycled to its highest and best use, he said.

RAA secured $6 million in financing to essentially rebuild the MRF, which was first constructed as a dual-stream facility in 1995 and was retrofitted for single-stream sorting in 2009. The state of Michigan provided an $800,000 grant, because state officials see value in adding recyclables processing capacity in that part of Michigan, Weinert said.

The rebuilt sorting line will be supplied by Machinex. It will be designed to handle 30,000 tons per year on a single shift. Of that, the city expects to supply over 14,000 tons per year, providing room for growth from other communities, institutions and private haulers, according to Weinert.

Little of the existing equipment will be reused.

“We are now going to be removing most of the existing equipment and selling it for scrap,” Weinert said. A notable exception is the two-ram baler, which was fairly new when it was purchased by the city in 2015, he said. City documents show RAA will buy the baler from the city for $125,000. For other equipment, including conveyors and sorting screens, RAA will pay a scrap metal value of 7.5 cents a pound.

While the facility is being rebuilt, RAA will temporarily ship recyclables to a MRF in Oakland County, Mich., rather than Rumpke’s MRF in Cincinnati.