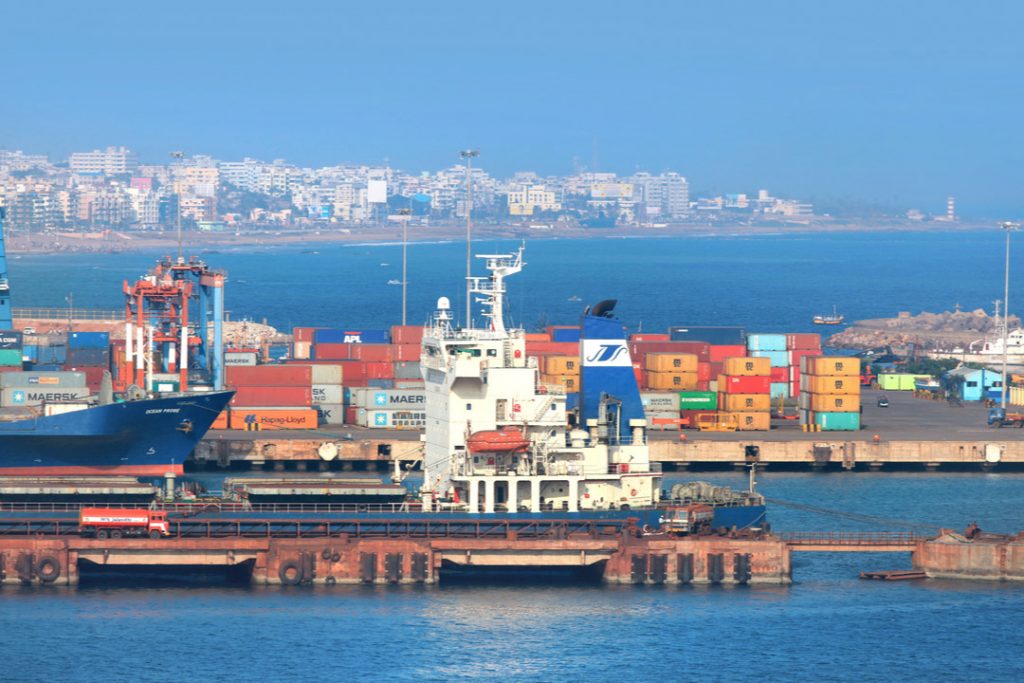 Imported mixed paper will be allowed a maximum of 1% contamination and will face more rigorous inspections, sources told Resource Recycling.

Last fall, environmental advocacy groups released their findings that dozens of paper bales that were sent from the U.S. to Indonesia were rejected at the destination port, only to be re-exported elsewhere. The report tracked 38 containers of mixed paper, contaminated with plastic and other non-fiber materials, that were re-exported to India, rather than sent back to the U.S. as the Indonesian government stated would be the case.

This flow of contaminated materials contributed to the Indian government’s decision, according to a major fiber brokerage.

The Times of India on Jan. 10 highlighted similar, more recent, contamination problems in imported mixed paper, citing the same flow of contaminants from Indonesia to India. According to the article, customs agents recently inspected 1,000 containers supposedly containing mixed paper and found that 300 of them were heavily contaminated.

As part of the new policy, in every container of mixed paper at least five bales are opened for inspection, Gothal explained, and many containers are being rejected at the country’s Mundra and Nhava Sheva ports, which are some of the largest ports in India.

According to Gothal, mills inside India have reduced their mixed paper procurement by more than 50% due to this policy, because mill buyers are not sure whether loads will clear customs. Because the policy is targeting mixed paper, prices and demand for OCC have increased, Gothal said. Prices for domestically collected OCC and mixed paper are also increasing as a result, he said.

Currently, only a small pool of mixed paper suppliers with high-quality sorting facilities can export this grade to India, Gothal added.

India’s fiber restriction joins the country’s import ban on scrap plastic that took effect at the end of August. It also comes shortly after Indonesia enacted a policy limiting contamination in imported fiber loads to 0.5%.

Last fall, Gothal spoke in detail about India’s prominence in the global mixed-paper market during the 2019 Resource Recycling Conference and Trade Show.

Because of the country’s mixed-paper buying appetite, India’s decision will impact the global recovered paper market.

After China, India is the second-largest export market for U.K. recovered packaging, Ellin said, and the country bought more than 400,000 metric tons of U.K. fiber in 2019, most of which was mixed paper.

“If they implement a 1% tolerance on non-fiber content, then it is an extremely brave person who would continue to export mixed papers there – source separated or co-mingled,” Ellin said.

Ellin pointed out the latest development appears to be similar to a policy India enacted in 2010 but has not enforced since then. That year, India’s Ministry of Environment and Forests stipulated maximum contamination limits of between 1% and 2% for various mixed-paper grades. In addition, according to the policy, OCC would be allowed a maximum of 1% contamination.

These strict limits have apparently not been enforced until the recent government interest in contaminated bales.

Michael Arcieri, sales manager for Ekman Recycling, said the future for mixed-paper exports to India is unclear given the current disruption. He said his company has been among the largest suppliers of recovered fiber into India for the last 25 years.

“However, I suspect that the grade will ultimately be banned the same way and for the same reasons that all the other countries have banned the grade, which is due to too much non-fiber in the pack,” Arcieri said.

He said there is very little mixed paper currently flowing into India, “with environmental and customs officials clamping down hard on quality and suppliers fearful of rejections.” Arcieri added that given this further export market disruption, and relatively full domestic markets, he suspects the volume of mixed paper going to disposal is “staggering.”

The National Waste & Recycling Association also published a fact sheet with details about the Indian restrictions’ impact on U.S. recycling. 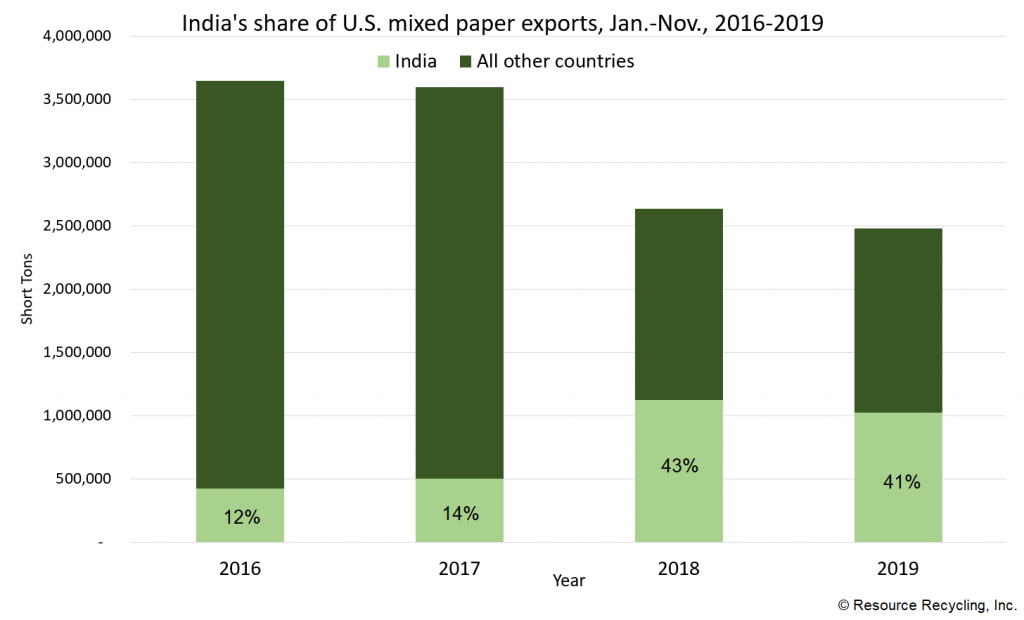 India has grown as a downstream market for U.S. mixed paper in recent years.

Recovered paper plays a huge role in India’s papermaking industry. A recent report laid out just how important the material is, and how improving import quality and lowering import volume can improve the paper industry as a whole.

India’s Center of Excellence for Sustainable Development (CESD) in August published a study that touched on resource efficiency in the paper sector. The study noted that there are between 653 and 850 paper mills in India (sources disagree on the total count), and the vast majority of them use recovered paper as feedstock. The report estimated between 579 and 760 mills use recovered paper.

Overall, 66% of paper produced within India is made from recovered paper, according to the report. To meet that need, the country consumes about 13.7 million tons of recovered fiber per year, and about 32% of that weight comes from imports.

But that reliance on imports comes with some downsides, as “the quality of imported recovered paper is not uniform, and a substantial portion of the imports are unsorted scrap paper,” CESD found.

“On account of the low quality (poor segregation) of imported recovered paper, the overall yield of recovered paper units is also low,” the report continued, stating that yield often ranges from 60% to 90%. Poorly sorted paper is also “associated with a larger proportion of byproducts such as plastics, high density materials, packaging waste, deinked sludge” and more, the report noted.

With an eye toward increasing the yield mills can reap from imported recovered fiber, the report recommended an approach that reduces contamination in fiber loads and reduces the overall volume of recovered fiber imports.

Imports “meeting a specified quality standard” could cut the need for imported recycled fiber by 860,000 metric tons per year, which would be a reduction of about 20% from the country’s current imports, according to the report.

CESD suggested this could be carried out by the country’s government through the Ministry of Commerce, Ministry of Customs, Department of Industry and Internal Trade, Bureau of Indian Standards or other agencies.