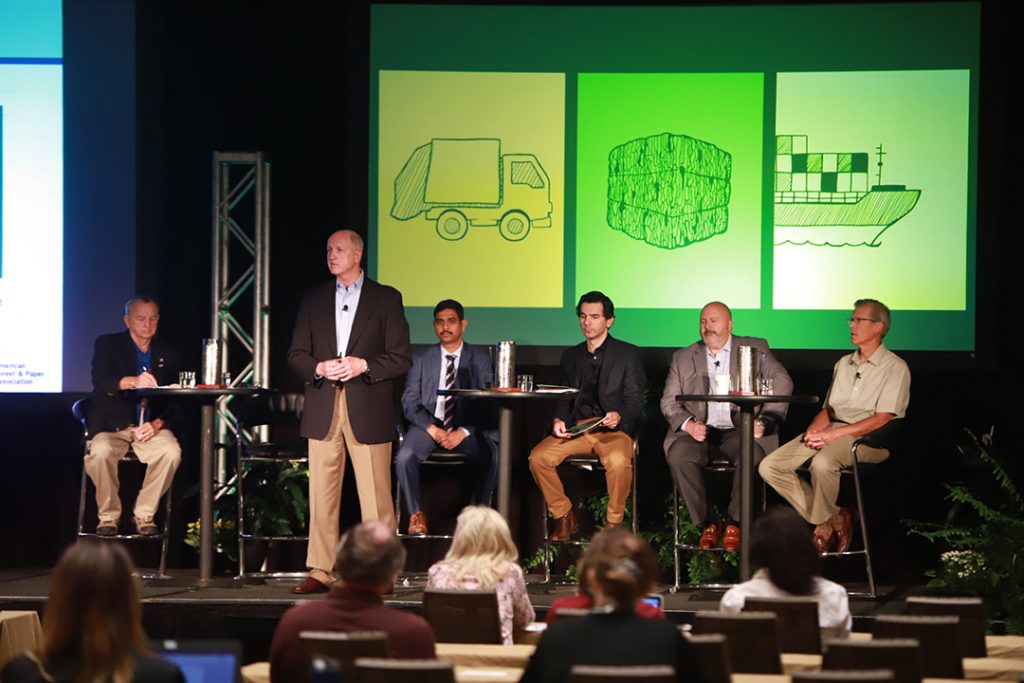 MRF operators, brokers and others recently discussed why fiber is still “the elephant in the room” in municipal recycling conversations.

During a recovered fiber session at the 2019 Resource Recycling Conference and Trade Show in New Orleans, stakeholders from throughout the paper recycling sector discussed where the market is and where it’s headed.

Fiber is the “elephant in the room” as far as the value of the residential mix that municipalities receive, said Dave Claugus, vice president of Pacific Northwest MRF operator Pioneer Recycling Services.

Why the fiber focus?

Paper is the “main event” at a MRF, said Claugus. In the Pacific Northwest, paper makes up 75% of the material that comes onto the tip floor Monday through Friday.

“That means that paper moves the price of whatever the processor can pay or needs to charge the municipality,” Claugus said.

Claugus argued there is an inelastic supply of recycled paper at the MRFs, meaning the supply does not respond to price and is relatively fixed.

“The generators of this material are totally disconnected from price. They have no price signal and so they don’t respond,” he said. This dynamic represents a “huge change” from when Claugus got started in the industry 40 years ago, he added, and the inelasticity has “profound” implications for the pricing of the material.

Under this dynamic, “when you have a shift in demand you’re not sliding gently down a supply curve, you’re falling off a cliff, and that’s why the pricing for recycled materials are so volatile,” he said.

Claugus also offered his opinion that volatility is the norm in the pricing of recyclables and that stability is the exception. And recognizing these realities, he said, is key to making sustainable recycling contracts.

“The generators of this material are totally disconnected from price. They have no price signal and so they don’t respond.” – Dave Claugus, Pioneer Recycling Services

“This is huge; everybody needs to understand this,” he said. “It should be part of your thinking as you approach any kind of contract renegotiation whether you’re a MRF or a municipality.”

China’s import restrictions heavily impacted mixed paper, as the country went from taking hundreds of thousands of tons per year to buying virtually none.

Brian Hawkinson of the American Forest & Paper Association (AF&PA) detailed the domestic mixed-paper market, which has received much attention in the wake of the overseas restrictions.

Over the long run, mixed paper is making up a smaller percentage of all recovered fiber consumed in the U.S. In 2009 it was slightly more than 14%, and by 2018 it had dropped to just more than 12%.

“The biggest by far, of course, is OCC,” Hawkinson said, noting that grade makes up about 71% of all recovered fiber consumed in the U.S.

The mixed-paper export market has also shifted dramatically over the past decade, and not just because of the turbulence over the past two years.

Citing U.S. Census Bureau data, Hawkinson showed that mixed-paper exports dropped substantially in 2010 concurrent with the U.S. economic downturn. That year alone, exports dropped from more than 7.5 million short tons to less than 5 million. Exports remained pretty stable between 4 and 5 million tons per year until 2015, when they started a downward slide that continued through 2018.

Details on the largest new market

Export destinations for recovered fiber have shifted dramatically, as well. India has become the current largest buyer of U.S. recovered fiber, and an expert says it is poised to be a strong market for the material moving into the future.

There are around 700 mills and that volume is growing, said Shailesh Gothal of Gemini Corporation, which brokers recyclables. Those mills are relatively small in size, with a typical Indian mill having a capacity of 100 to 250 metric tons per day, he said.

“But all in all, it is helping whatever China is not taking; India is trying to take a little bit more and help paper recycling,” he said.

Though the markets are very bad currently, India has an advantage in its population, Gothal said. The country is going through a period of greater urbanization and the government is stable, which will increase the per-capita consumption of paper, he said, particularly given the country’s massive population.

By grade, 15% of the newsprint consumed by Indian mills comes from within the country, with 85% being imported. But experts say newsprint is a “dying industry” in India, Gothal said, because no more investments are coming on the newsprint side.

Similar to the Pacific Northwest, paper plays a critical role in Ontario’s recycling programs. Almost 75% of the recyclables marketed in Ontario are fiber products, so “the gravity of the situation and potential impact was significant,” Yousif said.

In response to the inquiries from municipalities, CIF recommended recycling programs improve their operational systems through fiber sortation upgrades. This improves the quality of the output, in turn increasing market access into higher-grade end markets, which Yousif said are more available domestically than low-grade end markets.

“We’ve supported market development in the past, particularly in the field of plastics, but attempting to develop a fiber market is a whole different beast,” he said. Therefore, the best step municipalities can take is to improve their quality.

Several speakers pointed to signs for improvement on the horizon, citing a handful of mills coming on-line with recovered fiber capacity expansions.

“It’s a mix of reasons why the new capacity increases are coming on-line,” said Hawkinson of AF&PA, explaining some mills that used to make grades such as newsprint are shifting into recycled packaging, and other idled mills are coming back on-line.

As some of these North American mills prepare to expand their recycled paper purchasing, other mills that have been involved in the recycling sector for years are continuing to advance domestic paper recovery, including with innovative end uses.

Sustana Fiber operates two pulp facilities, one in Wisconsin and one outside Quebec City. These two mills create 250,000 tons per year of “the best recycled white fiber” in North America, said Mark Bond, sales manager for specialty fibers and sustainability at Sustana.

The food-contact application means some additional requirements of the recycled fiber, such as the material being fluorocarbon free and having other safety measures.