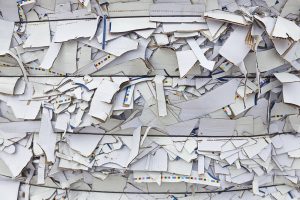 China’s Ministry of Ecology and Environment on April 4 issued the fifth round of import permits for 2019. It is the first major release since the first round for this year.

In the first permit release for 2019, issued Dec. 14, 2018, China approved the import of 5.6 million short tons of recovered fiber. That was a major boost from the first release of 2018, which saw 2.5 million short tons approved for import. The move was a positive start for the new year, indicating recovered paper, particularly OCC, would continue to flow to China.

After that initial spike in permits, however, subsequent releases suggested a decline from previous years. Two weeks after the first release, on Dec. 29, the Chinese government issued import permits covering another 476,000 short tons of recovered fiber. On Jan. 18, another 67,000 short tons were approved, followed by a month of silence. Then, on Feb. 19, the government released permits for just 11,000 short tons of recovered fiber. After that came six weeks without permit releases, until last week’s development.

The permit volume, while one indicator of the Chinese government’s willingness to allow in fiber shipments, does not tell the whole story. Government officials continue to state they will ban all “solid waste” shipments, which generally is interpreted to include recovered fiber, by the end of the year.

Additionally, actual shipments are lagging behind the amount permitted for import, according to Chinese customs figures.

As of the end of February, the latest period for which figures are available, Chinese companies had imported 1.7 million short tons of recovered fiber, or just 26% of the 6.1 million tons permitted for import at that time.

That 1.7 million tons was down from 2.8 million short tons of recovered fiber imported during the first two months of 2018.