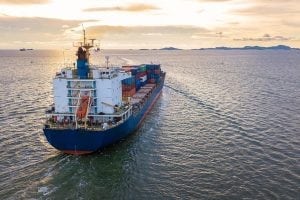 Months after China ramped up restrictions on scrap imports, countries such as Indonesia, Malaysia and Vietnam are initiating similar, if less extensive, policies as officials try to get a handle on massive increases in shipments and improper use of permits.

Indonesia, Malaysia and Thailand have either expressed similar concern about the increase in imports or taken steps to restrict those imports. As a whole, the countries have substantially increased the volume of scrap paper and plastic they import since China slowed its imports this year. In some cases, the countries have doubled or tripled their scrap imports in recent months.

“Obviously, these ports are not able to handle this kind of traffic,” Steve Wong, executive president of the China Scrap Plastics Association, said in a phone interview with Resource Recycling.

It’s difficult to keep abreast of the latest changes in this fast-changing regulatory environment, where new developments are emerging by the day. Last week, the Bureau of International Recycling (BIR) noted that “at times with little or no warning, countries were introducing regulations that massively impacted the recycling industry.”

The following is a rundown of recent Southeast Asian scrap import developments.

Indonesia began inspecting 100 percent of scrap paper and plastic imports in early April, according to Ranjit Singh Baxi, president of BIR. He noted the policy during BIR’s paper division meeting in Barcelona last week. The Institute of Scrap Recycling Industries (ISRI) shared the same information in an update to members shortly afterward. ISRI also published a letter from inspection company Cotecna describing the policy change to its customers.

Wong, who also serves as chairman of Hong Kong plastics recycling company Fukutomi, noted that Indonesia has historically had strict import license policies, and that it generally takes at least a year for a company to get licensed for import into the country.

Still, Indonesian scrap paper imports from the U.S. have soared this year, up more than 300 percent during the first three months of 2018 compared with a year earlier.

Although U.S. Census data indicates Indonesia has imported less plastic from the U.S. this year compared with last, other countries have ramped up shipments. For instance, the U.K. sent 11.5 million pounds of scrap polystyrene to Indonesia during the first three months of this year after not sending any during the same period a year earlier. The U.K. also sent 7.3 million pounds of mixed/other scrap plastic from January through March this year, after sending none during the prior-year period.

Concerns over the potential for imports to increase significantly were at the forefront of an April meeting between Indonesian government officials, plastics recycling companies and other stakeholders.

Indonesian news outlet Gatra reported that the April 30 meeting was related to an increase in permit requests and import volume increases, according to an online translation of the article. Stakeholders, including the Indonesia Plastics Recycling Association and the Indonesian Plastics Industry Association, described developed countries looking for alternatives to sending material to China, according to the article. They warned that an increase in imports could stymie efforts to advance local recyclables collection.

Concerns and disruptions in Malaysia have been reported since at least the beginning of 2018. Alerts from shipping lines to their customers provide a picture of the effects of a mass influx of recyclables.

In early February, shipping giant APL told its customers shipments of plastic to Malaysia would be restricted immediately in accordance with customs rules. The restrictions involved heightened paperwork requirements, essentially looking to ensure containers discharged at Malaysian ports had buyers ready to pick them up, and that scrap shipments had valid import permits.

Wong said Malaysia’s government temporarily stopped issuing scrap plastic import permits on May 23, but it has since begun again.

Wan Marzuliani bt Wan Mohd, principle assistant director for the agency’s approval and licensing division, told Resource Resource Recycling the NSWMD “is in the process of  reviewing existing policies and related process regarding the importation of plastic waste.”

“This is to control the entry of imported plastic waste to Malaysia,” the licensing director continued in an email. “However, currently the import permit application process is running as status quo and any application that meet the criteria set may be permitted.”

Imported plastic has become a focus of concern for local authorities in Thailand.

The country’s national police recently announced a raid at Laem Chabang Port, where inspectors discovered what they described as “poor grade, non-recyclable plastic waste sent from 35 countries,” according to an article in the Bangkok Post.

After a recent bust on imported scrap electronics, the inspectors were looking for further e-scrap import violations but instead came across the imported plastic. Inspectors seized 58 metric tons of plastic during the inspection.

According to the Bangkok Post, local environmental advocates are calling for a complete ban on recovered plastic imports in favor of bolstered domestic collection.

“This country does not have the capacity to examine all the plastic waste that is imported, thus it would be more realistic to stop all of these imports,” Tara Buakamsri, Thailand country director for Greenpeace Southeast Asia, told the Post.

APL, the shipping line, wrote to its customers on April 19 announcing a “temporary ban of plastic scrap shipments” from the U.S. and Canada to Malaysia and Thailand.

“This is in response to the escalating number of idle containers of recycled plastics in both countries,” the announcement stated.

Shipping company CMA CGM sent a similar letter to some of its customers around the same time, noting a temporary ban on shipments to Thailand and Vietnam, but it followed up in mid-May noting the temporary ban in Thailand had been lifted.

Wong told Resource Recycling the restrictions are the result of a confluence of factors: the increase in import volumes; a widespread practice of renting out import licenses for money; and increasing public pressure on governments take enforcement action against companies not meeting environmental requirements. 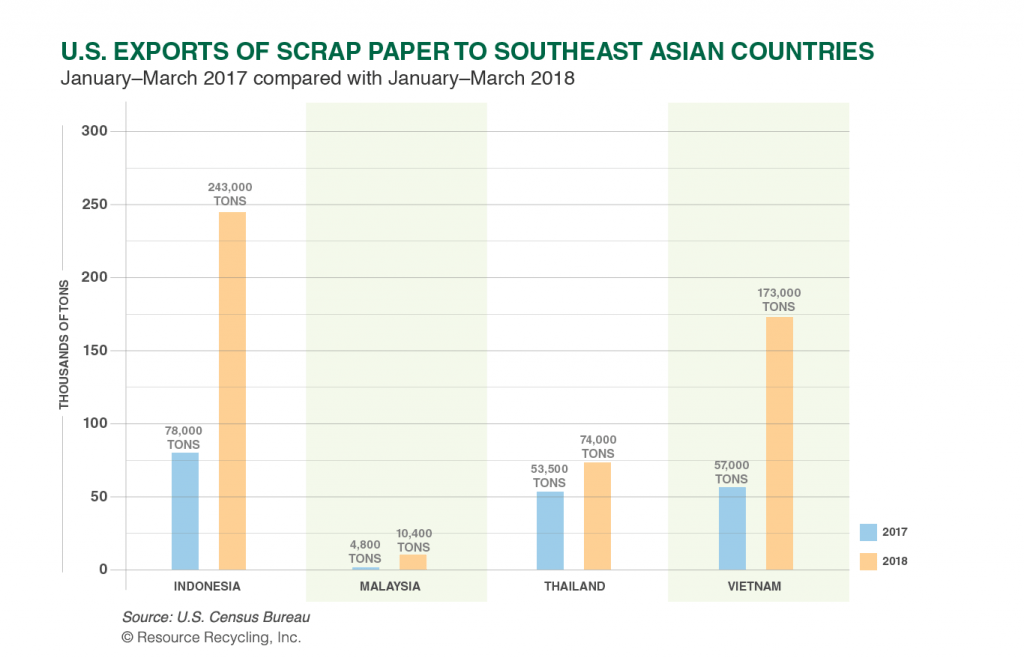 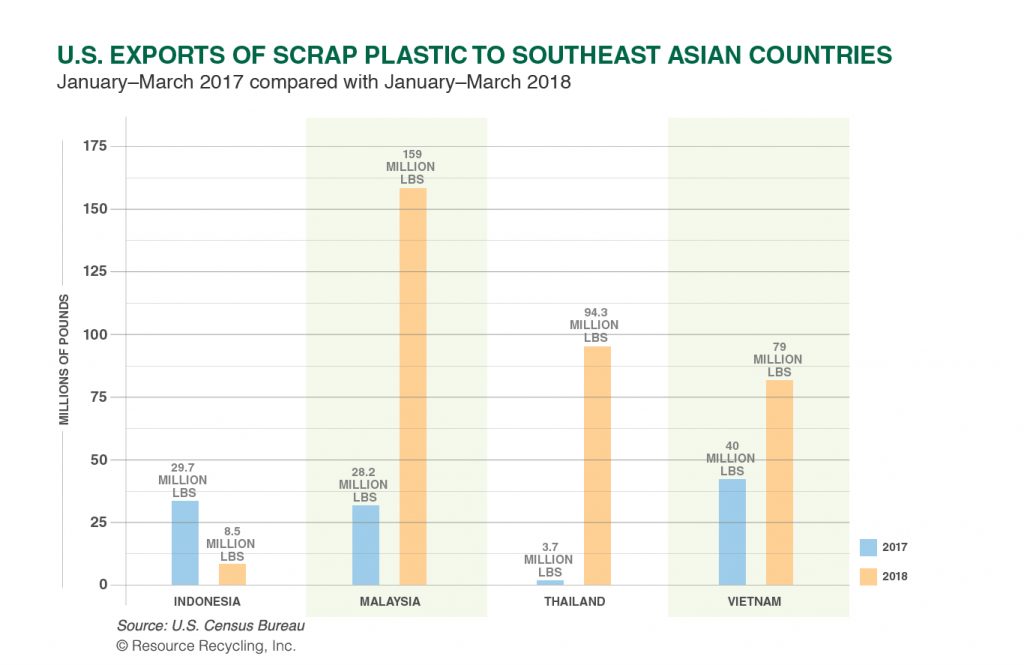 The influx of material into Southeast Asia has flooded the ports that have not had to deal with this sort of volume in the past, Wong said.

The permit sharing adds to the complication. Wong estimated that all of the Southeast Asian countries have this licensing problem, but that it doesn’t become clear until the shipment arrives at the port. Then, it sits.

“All of this imported quantity is far more than what was allocated,” Wong said. “Because of this, a quantity is stuck in the ports.”

When shipments are finally cleared, for example with the use of legitimate import permits, the license holder gets hit with massive demurrage charges. Shipping lines, looking to avoid these problems, are requiring customers to sign letters of indemnity and put down deposits for shipments. And in some cases, they won’t accept scrap material anymore.