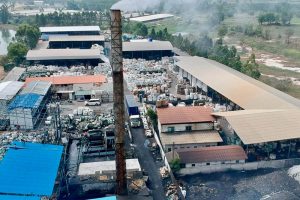 A Feb. 2, 2018 drone view of a site dubbed “dioxin factory,” where imported e-scrap is processed and circuit boards and wires are burned in a smelter.

A police raid at a massive e-scrap facility in Thailand prompted Seattle-based Basel Action Network to release results of its own investigations in the Southeast Asian country.

On May 22, police searched a nearly 40-acre complex run by a company called Wai Mei Dat Thai Recycling, according to The Nation newspaper. Based in Hong Kong, Wai Mei Dat (WMD) has locations in multiple countries, including a processing site in Chino, Calif. that it opened in 2016.

Authorities said the Chinese owner of the Thailand facility was lying on customs declaration forms to import e-scrap, according to the newspaper. They said facility staff, who are mostly from Myanmar and Laos and are living illegally in the country, were involved in open burning of material. Bright TV 20, a Thai TV station, posted an hour-long video of the police search.

Watchdog group Basel Action Network (BAN) issued a press release on May 24 about the raid. The action by Thai authorities also prompted BAN to release information about its own investigations in the country, said Jim Puckett, BAN’s executive director.

BAN has reported to Thai authorities the locations of three other sites it suspects are processing illegally imported scrap electronics, according to the watchdog group. Three BAN staffers visited the sites in early February. BAN also released a video news release showing the locations.

A whistleblower made BAN aware of one rural site, which BAN dubbed a “dioxin factory” because it has a smelter burning e-scrap and spewing smoke over the area. It was located about 80 miles northeast of Bangkok. In an interview with E-Scrap News, Puckett said the system lacked pollution control equipment. 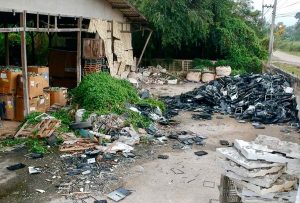 A Feb. 2, 2018 photo of a site near Sriracha, Thailand, that received e-scrap exported from Europe. BAN found the site using GPS tracking technology.

Tracking devices made BAN aware of two other sites, Puckett said. For years, BAN has tracked shipments of scrap electronics by using GPS trackers, part of its e-Trash Transparency Project. To date, it has only revealed the use of trackers on devices originating in the U.S.

But in the new press release, BAN acknowledged planting trackers in scrap electronics in Europe. Devices originating in Europe were eventually sent to two sites in Thailand, one in the Sriracha area near the coast southeast of Bangkok, and another nearly 90 miles northwest of Bangkok.

Puckett said he can’t yet provide more details on the European study. BAN plans to issue a report covering the use of trackers in Europe.