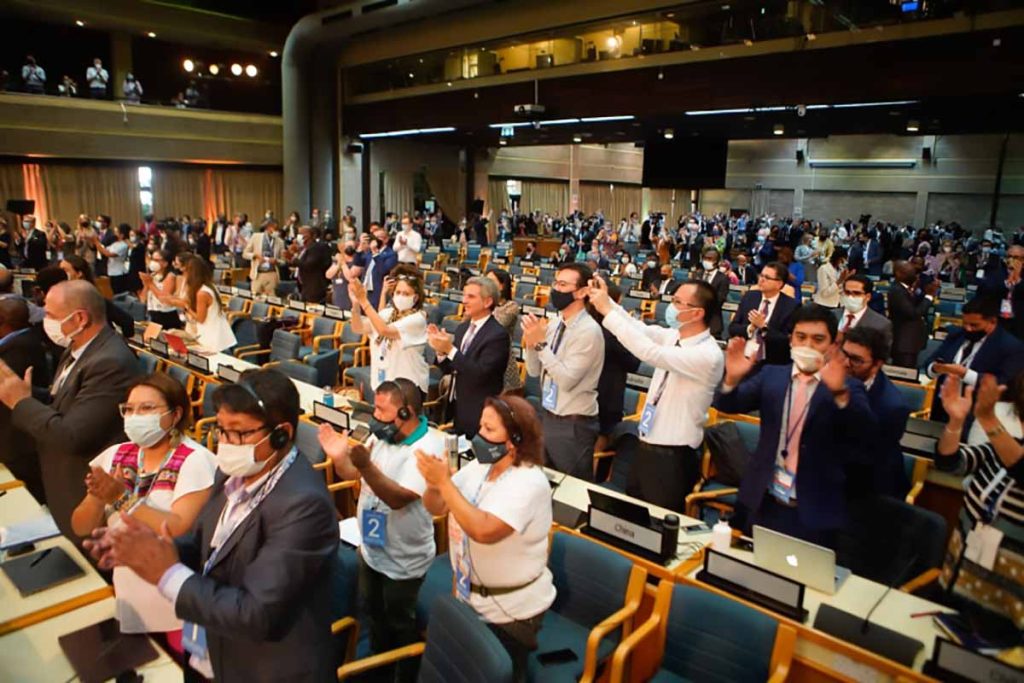 The meeting was the first to work on drafting the text of the Global Plastics Treaty, which is intended to be a legally binding document addressing plastic pollution across the value chain. | Courtesy of UNEP

Mixed reactions followed the first meeting on a Global Plastics Treaty, with some complaints about “industry interference.”

The first Intergovernmental Negotiating Committee (INC) meeting for the Global Plastics Treaty concluded Dec. 2 after bringing together country delegates, environmental organization representatives, plastic producers and other stakeholders for a week in Uruguay.

The meeting was the first to work on drafting the text of the Global Plastics Treaty, which is intended to be a legally binding document addressing plastic pollution across the value chain.

Convened by the United Nations Environment Programme, it’s a two-year-long process. The next meeting will be exclusively in person in Paris, the week of May 22, 2023, with Nairobi, Kenya as a backup location.

Break Free From Plastic said in a statement that the meeting ended “with a mix of high and low moments.”

Highs included demands for reductions in plastic production and use, elimination of toxic substances and the need for a just transition to the future for those currently in the industry, which was “backed by many member states and even two of the worst plastic polluters, Nestle and Unilever,” it said.

Diverse participation was also a positive, Break Free From Plastic said, but the group was disappointed that the adoption of the Rules of Procedure was not finalized and was instead moved to the next meeting.

“Additionally, precious negotiation time was spent discussing the Multi-Stakeholder Forum, a roundtable discussion organized a day before the start of the negotiations to deliver a report to the INC, despite the fact that it is not included in the mandate to develop the treaty and the entire enterprise appears to be an effort to divert and prevent the voices of civil society and rightsholders from direct and more meaningful forms of participation in the treaty development process,” the statement noted.

Graham Forbes, global plastic project lead at Greenpeace USA, called on governments to stop delaying meaningful negotiations and for the next meetings to be “free from industry interference.”

“We cannot let oil producing countries, at the behest of big oil and petrochemical companies, dominate and slow down the treaty discussions and weaken its ambition,” Forbes said. “If the plastics industry has its way, plastic production could double within the next 10-15 years, and triple by 2050 – with catastrophic impacts on our planet and its people.”

Reactions to the meeting

Carroll Muffett, the center’s president and CEO, said that while negotiations demonstrated the majority of countries are ready to take urgent action, “sadly, it also proved that plastic producers and their allies are equally committed to slowing progress and weakening ambition.”

Muffett called out the United States specifically for insisting that the plastic treaty “replicate the weaknesses of the Paris Agreement.”

Andrés Del Castillo, a senior attorney, added that “the failure of countries to fulfill their emissions reduction plans under the Paris Agreement shows that we cannot afford another treaty that centers on the whims of its leaders.”

The International Council of Chemical Associations (ICCA) “remains supportive of a legally binding agreement to eliminate plastic waste in the environment and is optimistic of the direction of negotiations towards achieving this goal as INC-1 concludes,” it said in a statement.

“Plastic makers around the globe are already transitioning towards a circular economy by investing billions in recycling infrastructure and designing plastic products for increased recycling,” ICCA noted. “This global agreement presents a significant opportunity to accelerate those efforts by fostering public private partnerships, aligning private investment with country goals and actions and reducing barriers to technology and expertise necessary for an equitable transition to circularity.”

Though many at the meeting raised concerns about chemical additives in plastics, ICCA said they are “essential to the myriad uses of plastics in modern life” and plastics and chemical manufacturers will “continue working with national governments and international negotiators throughout the INC process so additives can be used with confidence and deliver the benefits essential to so many critical products.”

The American Chemistry Council (ACC) released a similar statement, and also “strongly cautioned governments against production caps on plastics as proposed by some groups.”

The Global Alliance for Incinerator Alternatives (GAIA) said in a statement that the formation of a Group of Friends of Waste Pickers at the meeting “marks unprecedented recognition of the rights, skills and importance of the informal waste sector, ” and inclusion of waste pickers in the negotiations is key.

The core demand of the group is to develop a just transition plan, which includes adequate compensation for services, opportunities for self employment, a role in the plastic value chain, entrepreneurship and a role in the creation and implementation of policies.