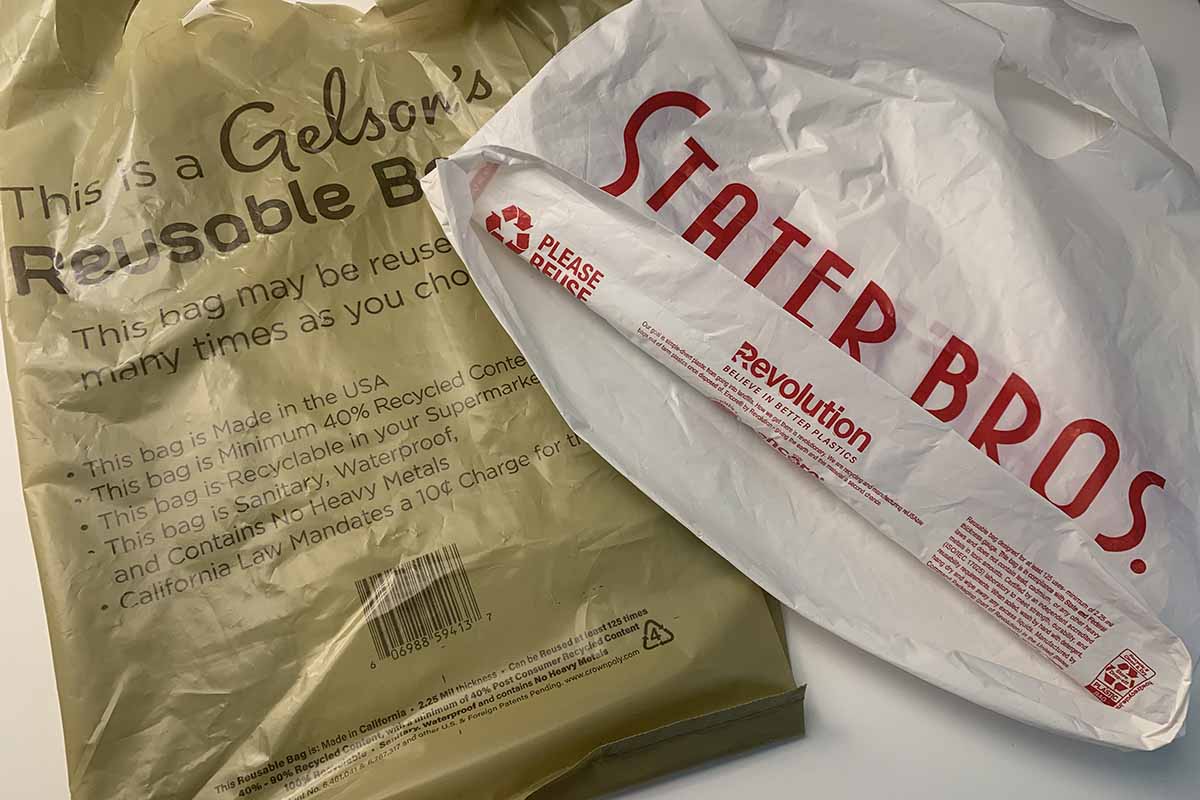 If most community recycling programs don’t accept PE bags but some grocery stores do, are the bags legally considered recyclable?

Three newly filed lawsuits argue the answer is no, implying it’s illegal for stores in California to provide them to customers.

The lawsuits were filed in state and federal courts by environmental group the Last Beach Cleanup and San Francisco resident Elisa Bargetto. A California-based group, The Last Beach Cleanup sued Gelson’s Markets and Stater Brother Markets in a state court in Los Angeles on June 3. Earlier, on April 29, Bargetto made similar claims in a class-action lawsuit against Walgreens filed in U.S. District Court.

At the heart of the lawsuits is the insistence that thicker, reusable PE bags effectively can’t be recycled through community recycling programs or through retail drop-offs.

“Consumers across the U.S. are deceived by instructions to ‘Return the plastic bag to a participating store for recycling’ or ‘Store Dropoff’ and sent on a wild goose chase with no benefit,” The Last Beach Cleanup wrote in a statement on its lawsuits. “Mixed post-consumer plastic film waste is contaminated and worthless. Few take-back bins exist and there is scant proof that collected post-consumer materials are actually recycled into new products.”

In a statement, Steve Alexander, president of the Association of Plastic Recyclers (APR), pushed back on several assertions in the legal filings.

“Reusable plastic bags are recyclable. The issue is simply they are difficult to channel back to recyclers,” he wrote. “Instead of using resources and media outlet campaigns to require that the store take-back bins remain in place, it seems as though resources are spent on attacking these bags with no viable solution.”

The complaints were all filed by Lexington Law Group and the Law Office of Gideon Kracov. Lexington Law Group has been behind similar recyclability claim lawsuits in recent years against TerraCycle, Walmart and Keurig Green Mountain. Also filed on behalf of The Last Beach Cleanup, the TerraCycle lawsuit contained citations mirroring those in the latest complaints.

The latest complaints allege that the thick, reusable PE bags defined under a California law – Senate Bill 270, the same law that banned single-use plastic bags – are not recyclable in California. They allege SB270 “prohibits stores from selling or distributing a reusable grocery bag made from plastic film unless the bag is ‘recyclable in this state.'”

The Last Beach Cleanup’s lawsuits claim an item is only considered recyclable under state law if consumers have access to recycling facilities that recycle the product, those facilities are able to sort the product from the general waste stream, and end markets are available to purchase and recycle the product. The complaints point to sections of California law and Federal Trade Commission guidance that require at least 60% of a population to have recycling access for a particular material to be considered recyclable.

“Because consumers do not have access to recycling programs that accept the Products, because the Products cannot be separated or recovered from the general waste stream and sorted into the correct materials bale by [MRFs], and because there are no end markets to reuse the Products or to convert the Products into a material that can be reused or used in manufacturing or assembling another item, the Products are not recyclable,” The Last Beach Cleanup complaints state. “Accordingly, Defendant’s sale of the Products is unlawful.”

The lawsuits point to persistent plastic bag contamination in curbside recycling streams. They also insist that after the 2020 expiration of a California requirement that larger supermarkets establish drop-off recycling programs for PE carryout bags, consumers have been left largely without places to take their PE film for recycling.

Additionally, the complaint argues that colored, contaminated film dropped off at stores is unlikely to be recycled because it doesn’t meet reclaimers’ standards.

“The limited opportunity for a consumer to return a Product to a store for potential recycling by a plastic film processor does not make the Product ‘recyclable in this state’ as required by SB270,” the complaint alleges.

The lawsuits ask a judge to end the sale of reusable PE bags, force the defendants to substantiate that the bags are recyclables and award The Last Beach Cleanup its attorneys’ fees and costs.

Arguing film recycling is a “charade”

In a statement, The Last Beach Cleanup called store drop-off recycling programs “The Great Store Dropoff Charade.” The group also stated that consumers get confused by recycling symbols on the bags and put them in curbside bins, at which point they jam up sorting equipment at MRFs or contaminate paper bales that are exported, resulting in littering or plastic burning overseas.

The Last Beach Cleanup and advocacy group Beyond Plastics recently published an op-ed in The Atlantic that claimed the U.S. plastics recycling rate is actually considerably lower than EPA estimates. The document drew notice from mainstream media outlets around the world.

SB270 requires reusable plastic bags in the state to meet a certain thickness standard, contain minimum amounts of post-consumer resin (PCR) (currently 40%), be third-party certified and be labeled as reusable and recyclable. A number of companies have received certification and met the requirements, according to the California Department of Resources Recycling and Recovery (CalRecycle) database.

Roxanne Spiekerman, who works for plastics reclaimer PreZero and who is now chair of APR, said during an APR meeting last fall that the law has stimulated demand for PCR.

In his statement regarding the recent lawsuits, Alexander noted that SB270 requires reusable bag manufacturers to label the bags as recyclable and provide instructions for returning them to store bins.

“Why is it logical to attack manufacturers of reusable bags who are following statute guidelines?” he said. “What they (manufacturers) can’t control is what store recycling bins stay in place.”

Alexander said the reusable bag requirements of SB270 have resulted in a steep reduction in the number of bags distributed and those cataloged in marine litter cleanups.

“The higher perceived value of these reusable and waterproof bags have reduced the distribution of bags drastically and reduced the number of bags that litter our waterways due to their less aerodynamic, heavier nature,” he wrote.

He insisted that residential film in all applications, including film protecting food and preventing waste, can’t be easily replaced.

“We also can’t rely solely on other resources, including paper and other heavier and more resource draining alternatives,” he wrote. “The film and flexibles spigot will remain on, and we can’t allow perfect to get in the way of good. The resources used to generate such articles and lawsuits would be better served working on collaborative and effective ways to increase supply of this material so we, as recyclers, can meet the growing demand of post-consumer material.”