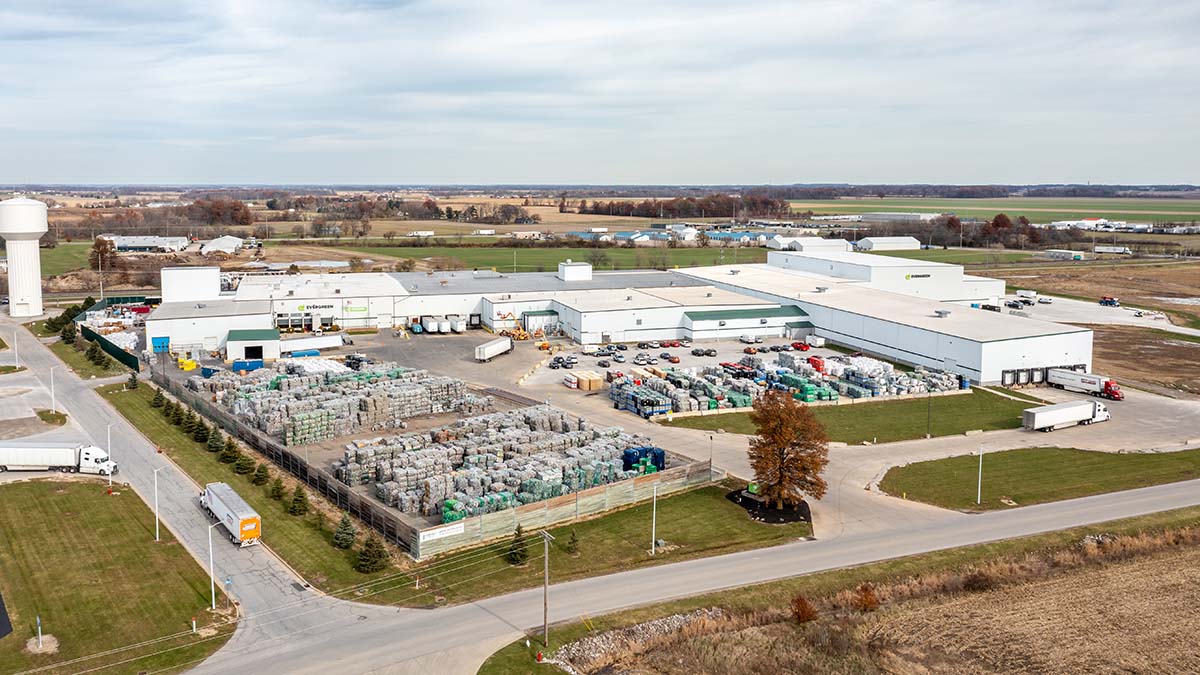 Evergreen has spent a total of $200 million on three recent acquisitions and an expansion to the company’s original Clyde, Ohio location. | Courtesy of Evergreen

To meet growing demand, PET reclaimer Evergreen recently bought a pair of facilities and added another extruder to an expansion project.

A plastics recycling and manufacturing company owned by The Sterling Group, Evergreen had a single facility in Clyde, Ohio in January 2021. It bought CarbonLite’s first PET recycling facility in Riverside, Calif. in May 2021 after CarbonLite filed for bankruptcy.

Evergreen announced today (Feb. 9) that it purchased UltrePET in Albany, N.Y. and Novapet in Amherst, Nova Scotia, in November 2021. UltrePET, now named Evergreen Albany, and Novapet, now named Evergreen Amherst, were acquired from wTe Corp. The acquisitions will allow Evergreen to expand its overall production capacity from about 40 million pounds a year to 147 million pounds of food-grade RPET.

An expansion project at the original Clyde location, scheduled to be finished in June 2022, will increase production capacity further, to over 217 million pounds per year. The project will add a 54,000-square-foot building to the existing 238,000-square-foot facility.

Evergreen General Manager Greg Johnson said the company has spent a total of $200 million on the acquisitions and expansion. The Ohio expansion was originally just going to add a single new extruder, but the company recently decided to add another for a total of four extruders at the facility.

CEO and President Omar Abuaita said the company is looking to continue to expand in the RPET space and “secure the supply for the bales, which is fairly important in today’s RPET world.”

“Albany gave us a great opportunity to bring on a team of people and a facility that actually thinks like us and had been in the space long-term,” he said. “They know what they’re doing.”

Abuaita said Evergreen’s larger North American footprint gives the company the advantages of supply security and closer proximity to customers, which reduces freight costs. He added that more international expansion is also an opportunity the company is interested in.

At next month’s Plastics Recycling Conference outside Washington, D.C., attendees will get an inside look at the outside-investment trend in the “Private Equity Impacts” session. The discussion, which will use the Evergreen plastics recycling expansion as a case study, takes place Tuesday, March 8 at 10:45 a.m. Eastern. Register today!

The company’s use of robotic sorting systems supplied by AMP Robotics will be extended to Albany. Johnson said the robots are already installed at the company’s Ohio and California locations.

Johnson said Evergreen spends “a lot of time innovating and upgrading our processes to try to produce not only the best PET, but customized recycled PET that can meet the varying demand of our different customers.”

COVID-19 did not have a big effect on Evergreen after the initial few months of 2020 when “nobody wanted to touch a bottle,” Abuaita said.

“Things are back to normal but normal is not a good thing,” he said. “Our collection system is broken. It’s not sustainable, not with the demand.”

For the security and stability of the collection system, the United States needs to drastically increase PET collection, Abuaita said, as “the vast majority is going into the landfill and that’s not the goal.”