Trex brings in plastic from multiple sources, primarily material coming out of commercial and industrial environments. | Courtesy of Trex

The leader of composite decking manufacturer Trex shared insights on recycled polyethylene markets and sourcing channels in an interview this week.

However, the company is in a period of significant growth, and its leadership anticipates sourcing more and more plastic in the years to come.

Two years ago, Trex announced it would increase its processing capacity by 70%. All of that capacity is now in operation, CEO Bryan Fairbanks said in an interview this week. The last of that capacity came on-line in May. During the company’s most recent earnings call, Trex leaders discussed adding an additional 15% capacity on top of the other growth.

And the company anticipates further room for growth. 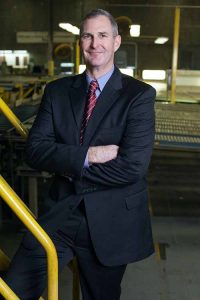 “Over the five to seven coming years, we still see significant opportunities to grow Trex at double-digit rates,” Fairbanks said.

Part of the business expansion is tied to growing consumer demand for recycled products. Fairbanks said consumers prioritize sustainability in composite decking products far more than they did just a decade ago, and it’s increased particularly strongly in the last year and a half. Product appearance, price and durability are always at the top of the list, but environmental sustainability is moving up quickly, Fairbanks said.

There are other trends driving the interest in recycled-plastic products, he added. More and more companies are making ESG commitments, many of which include recycled material use.

But even more important than those corporate commitments, in terms of increasing recycled demand in the short term, has been the price of virgin resin, Fairbanks explained.

“I’ve seen periods where prices have increased, and those industries that have historically relied on virgin made the move into using recycled materials,” he said, adding that that demand dynamic fluctuates with the market. “As soon as virgin came back down to a little bit more reasonable prices … they immediately moved back into using virgin.”

Early on in the pandemic, the company experienced some disruptions in its sourcing channels. When the stay-at-home orders and other restrictions began to take hold, film volume dropped.

“Many retailers were closed, distribution centers – unless they were an essential industry – were closed down,” Fairbanks said. “So a lot of those normal sources that we would go to, we were not getting material from.”

Trex used some of its safety stocks of material to offset the lack of inbound supply during that time. But it didn’t have to for long. After just a couple months, when more stores began to reopen, consumer demand shot up, Fairbanks said.

That meant distribution centers, grocery stores and other businesses that generate a lot of back-of-house scrap plastic film were open and busy. Trex quickly had the ability to rebuild its stock of material to make up for the disruption.

Beyond the small supply disruptions, Trex – like many companies in the recycling sector – has experienced challenges in the labor market. Worker shortages have been reported across many U.S. industries. Some companies have tied the challenges to expanded unemployment benefits issued during the COVID-19 pandemic.

Federal benefits expired in early September, and Fairbanks noted Trex has seen some easing of the labor challenges in the weeks since then. But he added it will likely be a few months before the impact of those benefits expiring becomes clear.

Freight rates and trucking availability – two other frequent business pinch points in the current market – have also eased a bit recently for Trex.

But the largest source for the company remains material coming out of commercial and industrial environments, such as stretch film used in distribution centers, protective wrap used in manufacturing sites, and other industrial film uses. These sites generate clean streams of PE film.

Fairbanks said the company is actively growing its sourcing channels. The company has a team of employees that engages with potential film suppliers to bring in more material.

“We recognize we need to be part of that solution, developing more programs to bring more material in, ” he said. “Just going out and saying, ‘Trex is here to buy your material,’ won’t be enough.”

One supply channel the company is not currently using is materials recovery facilities (MRFs). There has been a significant push among brands and other stakeholders for curbside collection and MRF processing of plastic film. But Fairbanks said it’s unlikely that MRF technology right now can generate a clean enough film product for Trex’s purposes, but that the company is monitoring that stream closely.

“We have the ability to run the material with a certain level of dirt, with some fiber contamination,” and even some other types of plastic mixed in, Fairbanks said. “It doesn’t need to be perfect, by any means, but unfortunately once it goes through curbside, there are so many different plastics and so much contamination that, today, the technology doesn’t exist to make it worthwhile. But that may well change.”

In another move to secure more feedstock, the company has been expanding its NexTrex program. In a move to increase drop-off recycling volumes, this initiative allows member brand owners to put a Trex recycling logo on their packaging indicating it is compatible with the company’s recycling process.

That project reflects the company’s goal to increase education for consumers about recycling options for film plastics. Fairbanks noted that, although these materials are not typically accepted in curbside programs, it’s important that consumers understand there are still outlets for recycling.

“If the consumer takes a little extra effort, takes it to the grocery store, takes it to another recycling center, it’s very likely that it will end up with Trex,” Fairbanks said.