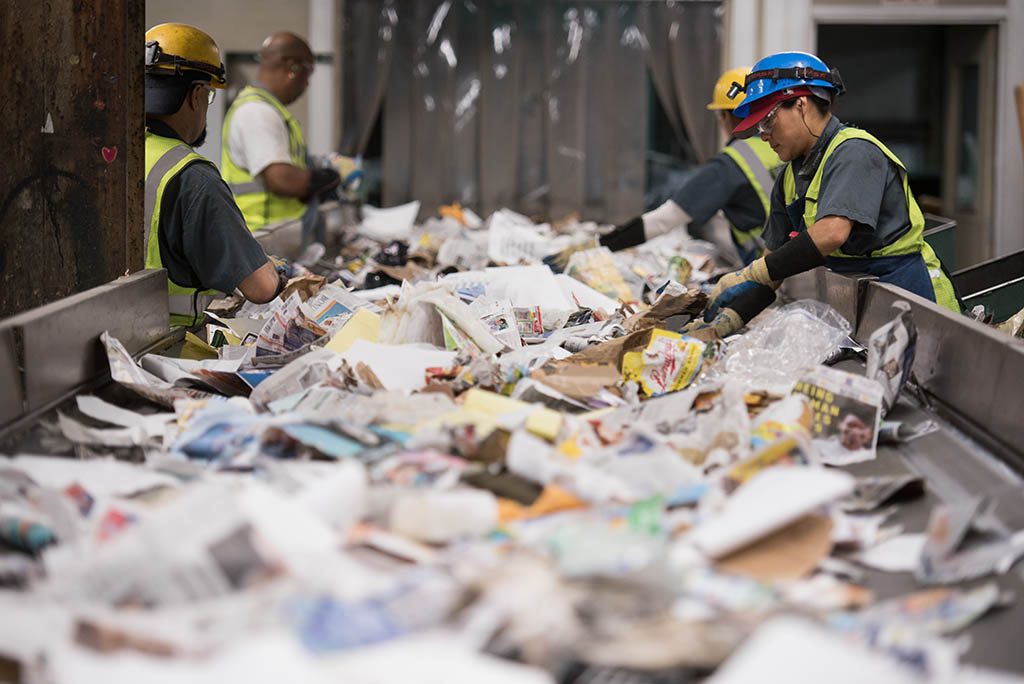 At the end of the day, after all of the equipment and policies and market investments, recycling still relies on people doing the work. But those employees have been harder to come by lately.

“We’re already short staffed, and of the staff that we do have showing up to collect every day, it’s about 60% of the workforce,” said Kanika Greenlee, who oversees garbage and recycling collection operations for the city of Atlanta.

“The labor shortage is real in the waste industry, not just in the public sector, but in the private sector too,” Greenlee added.

The recycling sector is struggling to navigate difficult labor markets, which have hamstrung service in a number of programs. For example, the city of Chattanooga, Tenn., population 183,000, announced a suspension of curbside recycling service in late July because it lacked drivers. Difficulty finding drivers with commercial driver’s licenses (CDLs), which was already a problem before COVID-19, forced the city of St. Louis to suspend curbside recycling pickup in July. Smaller towns – and private haulers – have been affected, as well, from the village of Fairport, population 5,200, in Upstate New York, to Clay County, Fla., both communities that are serviced by Waste Management.

What the big haulers are saying

During a MRF-focused panel at the 2021 Resource Recycling Conference, Brent Hildebrand of Vaughan, Ontario-headquartered GFL Environmental said finding and keeping employees is a high priority for his company – and it is increasing costs.

“As processors, we are having to get a little more creative on finding people,” said Hildebrand, vice president of recycling for GFL. To help address the situation, the company, which has operations in both the U.S. and Canada, has implemented $50-$100 bonuses at the end of the week for employees who come to work all week.

The expense is worth it, he noted. “These people are doing a hard job,” he said.

That being said, COVID-19 has also changed the calculus for when employees should stay home, he noted. Pre-pandemic, people came to work even if they weren’t feeling well. Now, the company has a strict policy that sick employees remain home, and he hopes that policy sticks around.

“In the past, I think that was kind of overlooked, but not anymore,” Hildebrand said.

GFL is far from the only large hauler experiencing employee cost pressures.

In its most recent financial filing, Waste Management, the largest residential garbage and recycling company in North America, reported that its operating labor and benefits expenses for the first half of the year totaled $1.5 billion, up 16% over the first half of 2020. During the second quarter of 2021, those costs totaled $791 million, up 24% year over year.

“During the second quarter of 2021, we began to see inflationary cost pressures as well as increased overtime from driver shortages that increased our operating costs,” the quarterly report notes.

During a July 27 conference call with investors, John Morris, WM’s chief operating office, noted that “there’s no silver bullet” for attracting and retaining employees. “We are using a multifaceted approach that includes addressing wages, offering flexible schedules, and broadening benefits,” he said.

During the call, Jim Fish, WM’s president and CEO, said the hiring difficulties have begun to ease. For example, in June, WM hired 685 employees – mostly drivers and technicians – and had 125 leave the company, for a notable net increase.

He said government unemployment payment programs have contributed to hiring difficulties for large and small businesses alike. The federal benefits are scheduled to end on Sept. 6, he said.

“It’s not a stretch to say that there isn’t a business out there that isn’t looking forward to the sixth of September,” Fish said.

Greenlee, a longtime executive director of the Keep Atlanta Beautiful Commission, recently took on the role of overseeing the city’s solid waste operations. In that position, she’s learned just how big of a challenge labor is.

The city’s order of service is garbage, recycling and then yard trimmings. For a little over 90 days, the city had to reduce collections of recycling and yard trimmings from weekly to every other week. “Our recycling superstars were not happy about that,” said Greenlee, who was speaking during an interview at the 2021 Resource Recycling Conference.

Since then, recyclables collection has returned to weekly service, but yard trimmings remain every other week.

The crunch is both with environmental service workers, who work the back of the trucks, and the drivers – but it is particularly challenging with the drivers. Greenlee noted that the city competes for CDL drivers with Amazon, Coca-Cola, UPS, Atlanta Public Schools and others.

To help find candidates, the city has been doing job fairs every two weeks. The first one she oversaw, on July 30, was “super successful,” she said.

“We had walkups – which we typically don’t allow – but we did and we took as many as we could, and we actually had to turn folks away from the job fair,” Greenlee said.

Some help has come from the top of the city’s administration. Mayor Keisha Lance Bottoms issued a proclamation giving employees benefits on their first day, rather than requiring them to pass a 90-day probationary period. Additionally, Atlanta Public Works just received approval to offer $500 sign-on bonuses, Greenlee said.

During the height of COVID-19, the city gave front-line workers, including collection workers, hazard pay of $500 a month. That expired at the end of June.

Some cities that have had to reduce service have also upped their pay to attract and retain employees.

In late-July, when Chattanooga halted curbside recyclables collections and urged residents to use drop-off centers instead, city officials said they intended to offer pay raises for employees, whom they said have been underpaid for years, according to The Chattanoogan newspaper. Mayor Tim Kelly this month proposed a city budget that boosts salaries, including a 42.6% average pay increase for garbage and recycling drivers, The Chattanoogan reported.

At the time it announced service suspensions, on July 16, the city of St. Louis already offered its union-represented drivers one-time bonuses of $1,500 and $500 employee-referral bonuses, in addition to competitive pay and benefits, according to the St. Louis Refuse Division. Three weeks later, the city announced a $3,000 hiring incentive for candidates who meet heavy equipment operator qualifications, as well as a doubling of the referral bonus to $1,000.

“The City continues to work aggressively to fill vacancies and deliver services to residents,” Refuse Commissioner Todd Waelterman stated in a press release.

Other operators are looking at innovative strategies – beyond pay increases – to attract and retain talent.

Kate Davenport, co-president of Twin Cities-based nonprofit MRF operator Eureka Recycling, said her organization offered employee bonuses, as well, and they were worth the investment. But Eureka also needs to begin exploring part-time options to help parents who find that daycares and schools are shut down by the pandemic, she said during the MRF session at the Resource Recycling Conference.

Elsewhere in Minnesota, but in a different corner of the recycling industry, St. Cloud-based electronics recycling company Integrated Recycling Technologies (IRT) actually went into the daycare business to help alleviate stress on employees during the pandemic.

Detailed last week in an article in E-Scrap News, sister publication to Resource Recycling, the IRT initiative involved converting 5,000 square feet of office space into a daycare, while undergoing a strict licensing process from the state. Employees pay only $100 a week and the general public pays market rates to enroll their kids. Like other companies, IRT also bumped pay and increased recruitment efforts to retain employees during COVID-19.

The daycare effort took several months and went over budget, but the difference it made has been significant, said Steve Budd, president and CEO of the electronics recycling company.

“The benefit and the reduction of stress in the employees that are using it is big,” he said. “It’s worth it. It’s so worth it.”