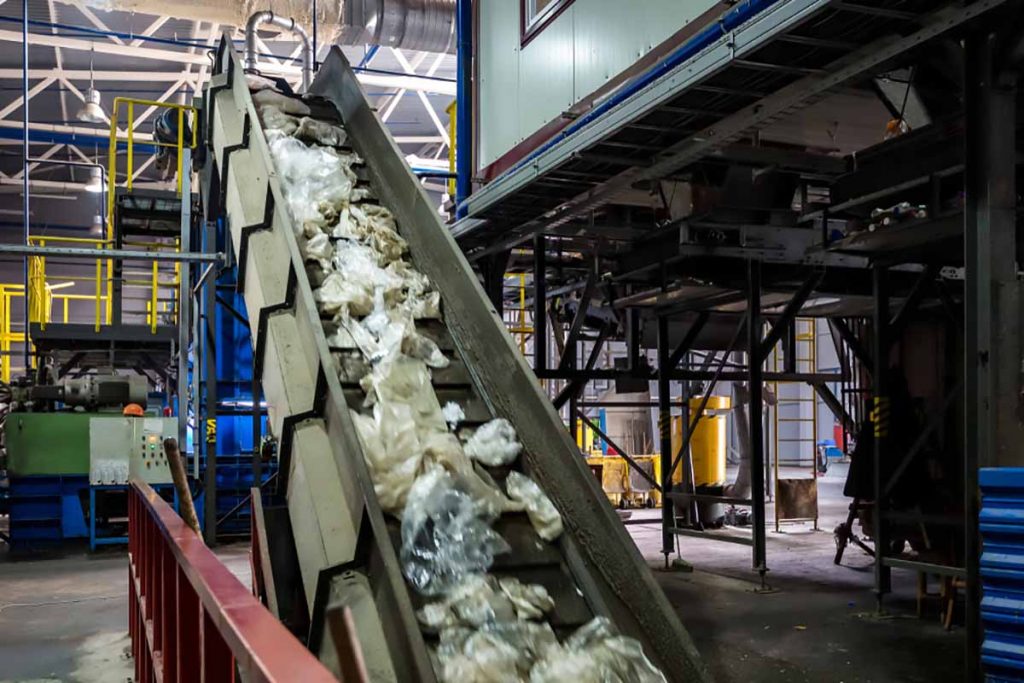 With the planned upgrade at an Omaha materials recovery facility (MRF), sorted and processed plastics will be converted into a plastic lumber. | jantsarik / Shutterstock

Firstar Fiber is receiving a loan from the Alliance to End Plastic Waste that will help the processor convert hard-to-recycle plastics into building materials, all within the confines of the sortation site.

Omaha, Neb.-based Firstar Fiber on July 29 announced the project, stating that the company will develop an “integrated recycling facility” adjacent to Firstar’s Omaha materials recovery facility (MRF). The project will be completed over the next three years, in collaboration with the Alliance to End Plastic Waste, a nonprofit organization funded by a range of plastics stakeholders and focused on waste mitigation efforts around the world.

Dale Gubbels, CEO of Firstar Fiber, told Plastics Recycling Update the project is a “bolt-on” addition to the MRF, and it will allow Firstar to process hard-to-recycle plastics into an end product. The project, Gubbels said, will realize Firstar’s longtime ambition of “taking something all the way through to its final end market.”

The project is the first major U.S. investment announced by the Alliance, which launched in 2019 and has focused its early efforts on waste management projects overseas.

In a release announcing the project, Steve Sikra, president and head of Americas for the Alliance, said the Firstar project will improve the recycling system by “creating value for hard-to-recycle plastic at the municipal and regional level.”

Sikra said one goal is to “replicate such efforts in other cities in the U.S. and internationally.”

The Alliance is providing Firstar with a $1.35 million low-interest loan, according to the Omaha World-Herald.

Familiar model, with a twist

Firstar receives recyclables through Omaha’s curbside recycling program, and from other sources. Omaha participates in the Hefty EnergyBag program, through which residents can bag hard-to-recycle plastics, and those bags are delivered to Firstar’s MRF, where they’re hand-pulled off the sorting line.

The MRF has used a Kansas City, Mo. cement kiln as its downstream outlet but is always looking for additional markets for the plastics. End markets for EnergyBag plastics have hit some roadblocks over the years. Chemical recycling firm Renewlogy stopped processing the plastics in 2019, leading its upstream supply to seek an alternative outlet, a cement manufacturing plant in Utah.

The Firstar plastic lumber project will serve as one end use for the EnergyBag materials, which can include typical polyolefins as well as multi-layered films and more.

“It’s going to be very similar to a [plastics recovery facility] in that we will be shredding and doing some minimal sortation, but mainly to remove contaminants that people are prone to put into anything that they set out,” he said.

The expansion will not involve a wash line, Gubbels added, but will instead use a dry-clean system also referred to as a “cyclone.” This step will get rid of any obvious dirt or dust on the plastics, he said.

Then, the company will move the shredded mixed plastics into a new extrusion line that is being installed as part of the project. The plastics will be converted into a plastic lumber inside Firstar’s facility. The end product specifications allow for lower-grade feedstock that doesn’t require a wash line, he explained.

“The primary thing is it will be going into feedstock and eventually end markets that can greater tolerate unwashed plastics such as the type of plastic lumber we’ll be making,” Gubbels said.

The manufacturing project is based on plastic lumber manufacturing technology in use by Rivalries Corporation in Canada. Firstar sent some of its EnergyBag material to the company to do some trials, and the resulting lumber was of good quality, Gubbels said.

Beyond the EnergyBag plastics, the Firstar project will be using other plastic film removed as contamination on the sort line. With funding help from Closed Loop Partners, Firstar recently installed equipment that pulls film off the sort line using a vacuum system, Gubbels said.

Firstar brings in between 40,000 and 44,000 pounds per month of plastics through the EnergyBag program, Gubbels said. The company plans to direct about a fifth of the EnergyBag material to lumber manufacturing, he said, with the remainder going to other uses. Besides the lumber production, Firstar is examining additional end use possibilities to further diversify the markets the EnergyBag plastics move into.

A number of secondary sortation and plastics recovery facility (PRF) efforts have been developed and have ultimately shut down in recent years. QRS Recycling and Titus MRF Services both shuttered sites, citing low commodity prices that were pressuring their businesses.

The in-house manufacturing capacity at Firstar brings a new element into the equation. Gubbels noted that it just doesn’t pencil out to ship some of the lower-value plastics to an end user.

“If it has little to no value, who’s going to pay the freight to get it anywhere?” he said.

With the Firstar project, the plastic will be recycled on-site – and the lumber and decking material sold into the local market – taking out a lot of the financial pressures that have hampered similar efforts, he said.

“We’re not going to be anywhere near as big as Trex and the others. That’s not our aim,” Gubbels said. “Our primary feeling is the MRF of the future can be a manufacturing facility as well, but you have to plan everything just right in terms of your inbound as well as your market for your outbound material.”

The plastic lumber can go into decks, patios, furniture and more. Firstar brought a few truckloads of the lumber down from Canada to show around in the local market, and Gubbels used some of the boards in his own backyard patio.

“It’s a very attractive board,” he said.

A version of this story appeared in Resource Recycling on August 3.