A few of the recycling innovations at K 2019 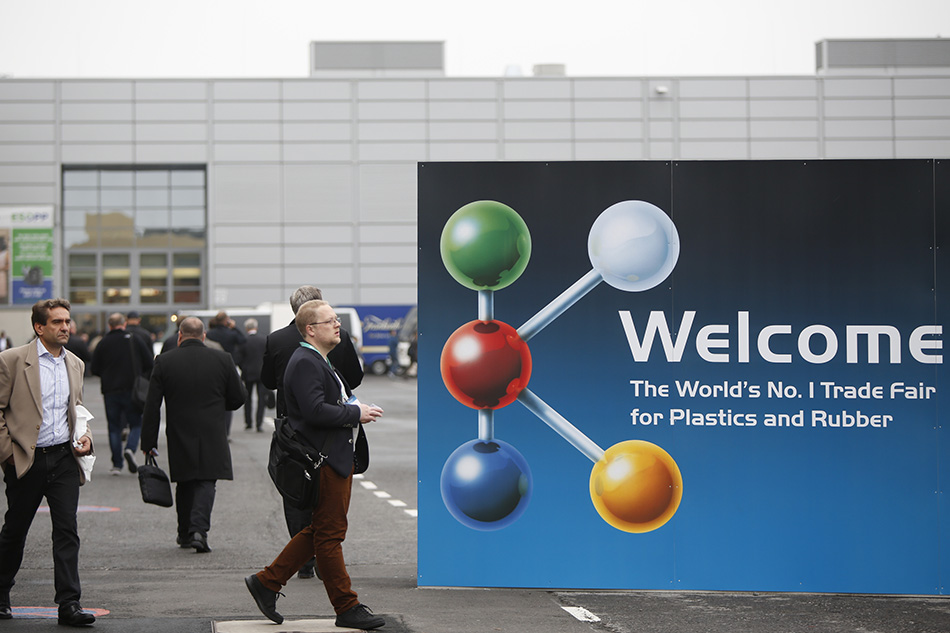 K show will draw 3,200 plastics and rubber industry exhibitors from around the world to Germany this month. With growing concern about plastic waste, recycling will play a prominent role.

A massive event that takes place once every three years in Düsseldorf, K show involves displays of the latest in recycling technologies, including equipment, additives and materials. Entire recycling lines are set up to process material on the show floor.

The following are details from over a dozen of the announcements companies sent in advance of the show:

Flexible-drive shredder: Size-reduction equipment provider Vecoplan will display a new shredder with a flexible drive concept. The single-stage shredder is a new model in the Vecoplan Infinity Shredders (VIZ) series. The machine can be equipped either with a high-torque, quick-start HiTorc drive or a frequency-controlled, belt-type direct drive.

“One particular highlight of this machine is its great flexibility in terms of the cutting geometry: It can be precisely adapted to different input and output requirements by changing the rotors and blades and by selecting the right screen,” according to a press release. “The performance can be precisely determined by the interface.”

Wash line unveiled: Lindner Washtech will display a new hot-wash line, which is a compact, modular system that has three stages and doesn’t require additional conveyors. According to a press release, in the first stage, shredded, pre-washed plastics are fed into a reactor, where they’re washed with hot water. Mixing arms apply concentrated friction to them. A double discharge screw conveyor then moves the material into the second stage, a new hot-wash rafter, where continuous friction is applied to remove residues.

In the third stage, the plastic goes to the Twister friction washer, which removes the hot water or hot caustic solution. The liquid is then separately treated. “The downstream water treatment system continuously monitors the water’s alkaline content and automatically applies the necessary chemicals,” according to the company.

Advanced flake sorter on display: Tomra Sorting Recycling will introduce its new Innosort Flake, which will be available in North America during the first quarter of 2020. The flake optical sorter can sort flakes from 0.08 inches to 0.47 inches in size by color and polymer simultaneously, according to a press release. “This all-in-one solution with ultrahigh resolution and specialized sensor configuration offers superior performance with exponential results,” according to the release.

In addition, Tomra staff at K 2019 will give a preview of the company’s work developing artificial intelligence software to improve plastic sorting. The company says it is developing deep-learning software for its sensor-based sorting equipment.

Like the company’s other metal detectors, the Rapid Pro Sense 6 series can be used on a variety of material infeeds to detect and remove metal contaminants. It is equipped with a new reject mechanism designed for compounders that have frequent color changes or work with abrasive materials, according to a Sesotec press release.

The company will also display its newly developed Flake Scan system, designed for use in a lab to analyze the quality of incoming or outgoing material. “A few minutes is all it takes to get reports on the composition of various plastics and on off-colour components in consistently high quality and with reproducible results,” according to the company.

RPET foils line: Amut will showcase a processing line that can recycle 100% RPET to a food-grade thermoforming foil. The line, developed in collaboration with plastics recycling equipment provider Erema, can produce foil from 1 to 2 meters in width and 0.15 to 2 millimeters in thickness. It has an output capacity of 4,400 pounds per hour, and it can be configured to produce foils with one layer, three layers or up to five layers.

Injection molding containers: Austria-based Engel, which supplies injection-molding machines, has several activities planned related to recycling. First, the company will use its equipment to mold recycled ABS at the show. Noting that recycled resin is generally less consistent than virgin, the company will demonstrate the use of its iQ weight control assistance system, which has software that ensures a constant melt volume during injection. The result is a consistently high-quality product, even with fluctuating qualities of feedstock, according to a press release. “Intelligent assistance opens the door for recycled materials to a far broader range of applications,” Günther Klammer, head of the Plasticizing Systems division and Circular Economy expert at Engel Austria, stated in the press release.

In addition, Engel will mold miniature waste containers out of nylon from recovered fishing nets. The company will use an Engel victory injection molding machine to covert the polyamide, which came from nets recovered in Chile, into boxes.

Lastly, Engel will demonstrate the use of recycled plastic as a middle layer in “sandwich-moulded components,” where the “bread” of the sandwich is virgin plastic. According to a press release, at Engel’s booth, the company will produce boxes with over 50% recycled content PP using what it calls its “skinmelt process.” The recovered PP comes from Germany.

Stretch-blow molding monitoring: Plastics Technology reports Agr International will display its latest vision system for detecting flaws in PET, including high-recycled-content PET, inside a blow molder. The system can manage up to six cameras for defect detection, including color variations, inside the stretch-blow machine, the publication reports.

Stabilizer additive demonstration: German additive company Baerlocher will introduce its T-Blend products, which are based on the company’s resin stabilization technology (RST) product, Plastics News reports. Described as dust-free additives that work alongside traditional antioxidants, T-Blend additives will be used at the show to recycle low-value consumer film scrap.

Multiple products unveiled: Clariant will highlight a number of additives. According to a press release, the company’s newly developed AddWorks PKG 906 Circle polymer stabilizer allows manufacturers to use higher levels of production scrap in PP and PE films. Particularly suited for biaxially oriented polypropylene (BOPP) film manufacturing, the additive can also be used in cast and blown film processes.

The company will also highlight how its Licocene Performance Polymers (LPP) can be used to replace latex as a carpet backing. At the carpet’s end of life, the propylene-based LPP can be recovered via the CreaSolv recycling technology, a chemical recycling technology developed by Germany’s Fraunhofer Institute, according to Clariant.

Additionally, Clariant will showcase how its lubricant additives can help improve the flow and mold release properties of recycled polymers. For example, a company that recycles e-plastics is using the Licolub H 12 additive to modify the plastic’s rheology to achieve melt flow improvement during processing.

Recycling at the show

Blow molding and recycling bottles: Brazilian petrochemicals company Braskem will provide both bio-derived virgin and post-consumer resin to German molding equipment company Kautex Maschinenbau, which will blow mold the plastics into three-layer HDPE bottles. The containers will have a foamed middle layer. Then, instead of handing them out as swag, they’ll be provided to equipment company Erema, which will recycle them.

“With this initiative the three companies will demonstrate their responsibility to participate in the circular economy by helping to achieve future goals with environmentally friendly solutions,” according to a press release.

Erema is setting up what it’s calling the “Erema Circonomic Centre” at the show. There, live demonstrations will be provided. During the show, over 30 tons of plastic will be recycled during the show, including the Braskem-Kautex HDPE bottles.

Injection molded auto part: Plastics Technology reports German equipment supplier KraussMaffei will mold and then recycle PP buckets into an auto part. The buckets will be molded at the show before they’re shredded and the plastic is sent into a ZE 28 BluePower twin-screw extruder. Pigments and talc will be added to the PP before it’s pelletized.

The compound will then be fed into a PX 320 injection-molding machine, which will produce an A-pillar panel (that’s the plastic that covers the pillar between the front seat and back seat windows, up near the shoulder seatbelt).

“This is precisely what many of our customers appreciate who, in addition to laser filters, regularly clean screw elements, spinnerets, spin packs, pelletizing discs or screen changers, for example,” Thomas Schwing, the company’s managing director, stated in a press release.

The system is only slightly larger than a full-size refrigerator. The press release noted growing demand for small-format cleaning equipment. The company’s customers include plastics reclaimers and compounders.

LDPE-aluminum pellets: Italian equipment company Amut Group will highlight a project to recycle a mix of plastic and aluminum from cartons. The company’s booth will include information about its partnership with Ecoplasteam, which is processing the LDPE-aluminum residuals from paper mills that are extracting fiber from Tetra Pak cartons. The material, called polyolefin-aluminum (POAL), is washed and pelletized to create Ecoallene-branded plastic, which can be extruded, thermoformed or injection molded, according to a press release. The entire treatment process is performed on Amut equipment. Plastics Recycling Update wrote about the project in July 2018.

Chemically recycled products: BASF will showcase a number of products created through its ChemCycling project. As part of a pilot project, BASF used pyrolysis oil derived from scrap plastics to make new plastic, which was molded into four products:

RPET egg carton: Plastics News Europe reports Kiefel Packaging will display a 100% post-consumer PET egg carton that the company says has the same functionality and strength as virgin plastic cartons. The publication reports Kiefel combined its new flatbed tooling with its latest KMD thermoforming machine to develop a streamlined process for producing the packaging. In addition to the plastic carton, the company will display the thermoforming equipment, called the Speedformer KMD 78.2, at the show.