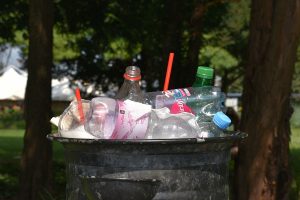 The weight of plastic bottles collected for recycling continued to decrease in the U.S. in 2017, contributing to the third straight year of a declining recycling rate.

The American Chemistry Council (ACC) and the Association of Plastic Recyclers (APR) on Monday released figures indicating 2.8 billion pounds of plastic bottles were collected for recycling in 2017. That’s down from more than 2.9 billion a year earlier, a decrease of 3.6 percent.

The overall plastic bottle collection rate, which calculates the percentage of plastic bottles collected out of the total weight of plastic used to produce new bottles, was 29.3 percent in 2017. In 2016, it was 29.7 percent. The report acknowledged 2017 was “an exceedingly difficult year for plastic bottle recycling.”

The latest figures indicate the continuance of a recent downward trend. After more than two decades of solid growth, the plastic bottle recycling rate fell slightly for the first time in 2015. Since then, it has declined each year.

Despite the overall downward movement in collection and recycling rate, there were some positive indications in 2017. Notably, although collection of the material dropped, the weight of PET bottles processed increased by 59 million pounds compared with the 2016 figure.

The PET bottle recycling rate also increased slightly – even though collection fell, the total volume of virgin and recycled PET resin used to make new bottles declined significantly in 2017. This volume fell by more than 4 percent, or about 259 million pounds. The report attributes this in part to the bankruptcy of M&G Polymers USA, which was a major supplier of virgin resin.

In other news, Petcore Europe on Dec. 19 released the results of a PET bottle recycling survey. The effort showed that 58.2 percent of PET bottles sold into the European market were collected for recycling in 2017. The rate was down 1.6 percentage points from 2016.