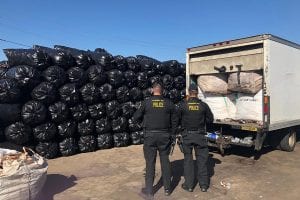 Authorities have seized thousands of pounds of beverage containers and made multiple arrests in an alleged scheme to defraud the container deposit program in California.

The case centered on an operation that regularly brought used beverage containers from Arizona into California to redeem under California’s Beverage Container Recycling Program. Consumers pay a 5- or 10-cent deposit for certain beverages, and that value is refunded when containers are returned for recycling. Under state law, only containers sourced from within the state are eligible for redemption.

Law enforcement agents last month arrested three suspects who were involved in the scheme, the California Department of Resources Recycling and Recovery (CalRecycle) announced this week. Two of the suspects, Miguel Bustillos and Anthony Sanchez, were involved with an Arizona trucking operation that was used “for the sole purpose of smuggling out-of-state containers into California to defraud” the container return program, CalRecycle alleged. The third suspect, Amaury Avila-Medina, acted as a material broker in California, authorities stated.

Concurrent with the arrests, law enforcement authorities recovered nearly 28,000 pounds of used beverage containers from a collection yard in Phoenix. The seized materials, which included plastic and aluminum containers, represented a potential return value of nearly $42,000, according to CalRecycle. Search warrants were executed in two other locations where authorities believe containers were packed and loaded onto trucks for delivery into California.

Investigators believe the individuals carried out the operation over the past three years and defrauded the California redemption program of more than $16 million.

All three suspects were charged with felony recycling fraud, attempted grand theft and conspiracy. The charges carry a potential sentence of six months to three years in prison, plus fines.

This is the latest in a number of alleged deposit fraud plots carried out in California. In April, CalRecycle announced indictments and arrests in a case involving tens of millions of dollars in fraudulent deposit redemption requests.

Editor’s Note: An earlier version of this story misstated a dollar value in the headline. This has been corrected.