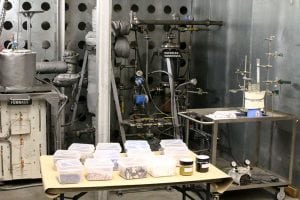 Part of the R&D lab at Agilyx’s Tigard, Ore. facility.

Agilyx is already processing scrap PS into a feedstock for prime plastics production. Now, the Oregon company says it can do the same thing for recovered PE and PP.

Agilyx announced last week it is capable of processing the polyolefin recyclables into a feedstock for steam crackers, which, in turn, use it to create chemicals for olefin manufacturers.

Through 14 years of research, the Tigard, Ore. company has developed the ability to process a range of plastics, including mixed and contaminated material, into oils/fuels and the building blocks for new plastics. It started in the plastics-to-oil business and has since refined its pyrolysis technology so that it can also be used to depolymerize PS. The resulting styrene monomers are sold into virgin PS production markets.

In April, it held a grand opening for its PS processing plant.

In an interview with Plastics Recycling Update, company CEO Joe Vaillancourt highlighted the company’s “predictive modeling capabilities.” Over the years, Agilyx staff have developed a keen understanding of which input “recipes” will result in which outputs. In all, Agilyx has performed more than 1,500 feedstock characterizations and developed about 800 product characterizations, Vaillancourt said.

Agilyx also uses a “disciplined feedstock management system,” analyzing recyclables from hundreds of different customers and organizing the inventory by quality. “That is, in our mind, the most critical element of chemical recycling,” Vaillancourt said.

With those capabilities, Agilyx can accelerate the time it takes to create a product meeting tight specifications for the oil/fuel and chemical substrate markets, he said. With its latest press release, Agilyx announced it has developed products that meets specifications for naphtha crackers, which have tighter tolerances than liquid crackers capable of taking low-quality crude.

“What we’re trying to do is create visibility around what we’re able to do, and then create those strategic syndicates that allow us to scale quickly and of a size that’s important to our partners,” Vaillancourt said.

Agilyx isn’t yet producing ethylene and propylene monomers for sale into plastics markets, but it wants to in the future. “This is in our R&D pathway,” Vaillancourt said, “but as an intermediate step we’re first going as base feedstocks for naphtha crackers.”

He said the company is currently negotiating off-take agreements and wasn’t yet able to disclose potential buyers. Agilyx plans to co-locate processing units with the buyers’ manufacturing facilities.